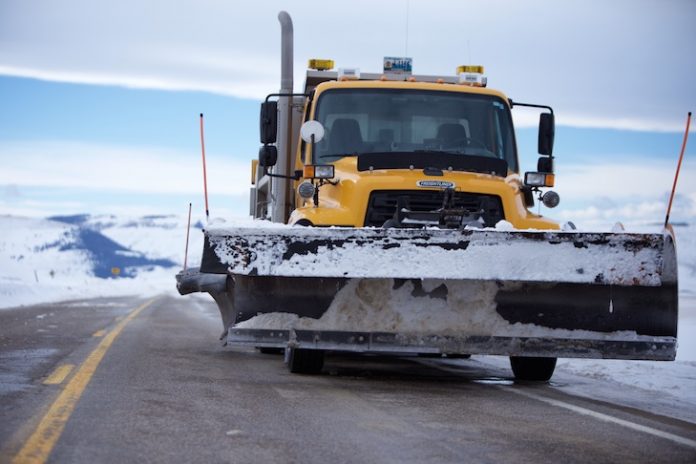 1. When the snow flies, WYDOT crews work 12-hour shifts around the clock

The Wyoming Department of Transportation were busy plowing the highways during snowstorm after snowstorm this winter. It takes 6 plows running at a time when it’s snowing hard — one crew heading east and one heading west.

“It’s been a busy 6 weeks. Everyone is a bit fried,” said the WYDOT supervisor for the road crews in Rock Springs.
.

The vehicle is a 500-horsepower Freightliner, complete with a 12-foot plow on the front, a 6-foot wing (which plows along the side), and a dumper full of salt-sand mixture.
.

The plows were getting stuck clearing Highway 191 South near Miller Mountain. The plows can push through 3-4 feet of snow without a problem, but even the behemoth vehicles can have difficulty with 6 feet of snow.

Highway 191 South can close for extended periods because it is local WYDOT’s lowest priority road.
.

5. Plows can carry about 8 tons of salt and sand

The salt and the sand adds traction and changes the freezing point so the ice melts at a lower temperature. The lower the temperature, the more salt is needed.
.

6. This is one of the worst winters they’ve seen

The crews do see bad snowstorms each winter, but normally snow will melt before the next one hits.

“It’s all dictated by Mother Nature. We have some very dedicated plow drivers. We’ve been short a couple guys all winter. They’ve put in the extra hours and extra effort,” said the plow crew supervisor.
.