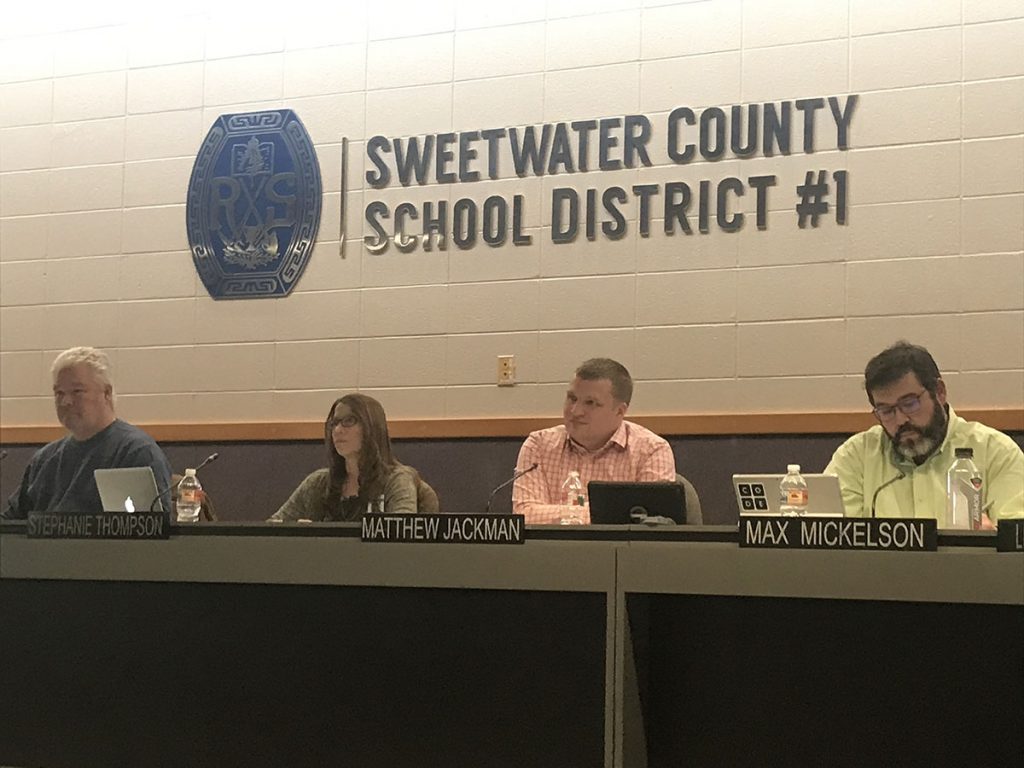 ROCK SPRINGS — The first of two public hearings on a proposed change to the Sweetwater School District #1 schedule resulted in emotional testimony, both for and against the measure tonight.

The district Board of Trustees listened to more than two hours of testimony on both sides of the argument during its regular monthly meeting. Staff, parents and one student presented passionate and valid arguments that the board will consider before one final public hearing and the deciding vote on April 8.

Human Resources Director Nicole Bolton presented the board, and packed house, with results from a districtwide survey that showed 60 percent of the staff favors the four-day week.

According to the results, the majority of every school in district with the exception of Rock Springs Junior High School voted in favor of the four-day week.

Bolton said the staff feedback focused on uninterrupted time with PLC (professional learning community). PLC is a group of educators that meets regularly, shares expertise and works collaboratively to improve teaching skills and the academic performance of students.

Bolton also said the district conducted seven forums that invited public input, and most of the feedback was very positive, although the forums were not well attended.

“We hardly heard any concerns about babysitting, ironically,” she said about a subject that raises some concern for families with two working parents.

Some student options were discussed in the survey, including moving all detention to Friday so the kids don’t miss any class time, using Friday’s for assistance with homework or make-up work, and utilizing funds to run intervention groups, according to the survey.

However RSHS sophomore Gabriel Garcia warned that free Friday’s could lead to problems of another kind. Districts are still required to meet an hour quota at the end of the year, which will make the four days longer than a traditional five-day schedule.

“I have a friend who might have to drop out of school to help his family with money,” Garcia, a member of the high school band, said. “Longer days will effect the things that we have to do after school.”

“You can’t separate the adult from the child,” Bolton told the board. I’m not advocating for the four-day week. I’m just presenting you with the information we gathered. “Research is very neutral on how a four-day week impacts student achievement.”

But she added that studies have shown the shortened week positively impacts both teacher and student attendance and morale.

“But ultimately, teachers and instructional strategy make the difference, not how much time is used,” she concluded.

While board member John Bettolo appreciated the effort put into the information gathering stage, he said “I’d like to know before we vote what approach do you and (Superintendent) Kelly (McGovern) think is the best approach.”

A Word from the Audience

Following Bolton’s presentation, several teachers and parents took the floor to contribute to the discussion.

“Teacher morale shouldn’t be the impetus for this sort of change,” said Farson-Eden teacher Jacob Summers. “Some of the best instructors I have ever met are currently looking for other jobs, because of this change.”

Summers said he wasn’t sure if the impression was intentional, but he feels the district’s administration is pushing the change on its staff. In the survey, 21 of 27 administrators voted for the four-day week.

“I’m also going to have to find something to do with my child,” said Meagan Doporto, a fourth grader teacher at Stagecoach Elementary. “However, having teachers ready to teach and not mentally and physically completely beaten and exhausted, you’re going to get more out of the four days that they are there with those children than you are, just because you’re keeping a day for day care.”

Darcie Punches said the community is simply not ready for this type of change.

“I am a junior high teacher and I’m for the kids,” Punches said. “I think this could be a great change with some community partnership, but I do not think we have enough time with those community partners to make sure our kids are safe.”

Bolton said her staff will conduct several more public forums and the community can also comment on the district website.

The board will conduct another public hearing before its April 8 meeting and then vote on the measure during that meeting. If the four-day schedule is approved, it will go into effect for the 2019-2020 school year.