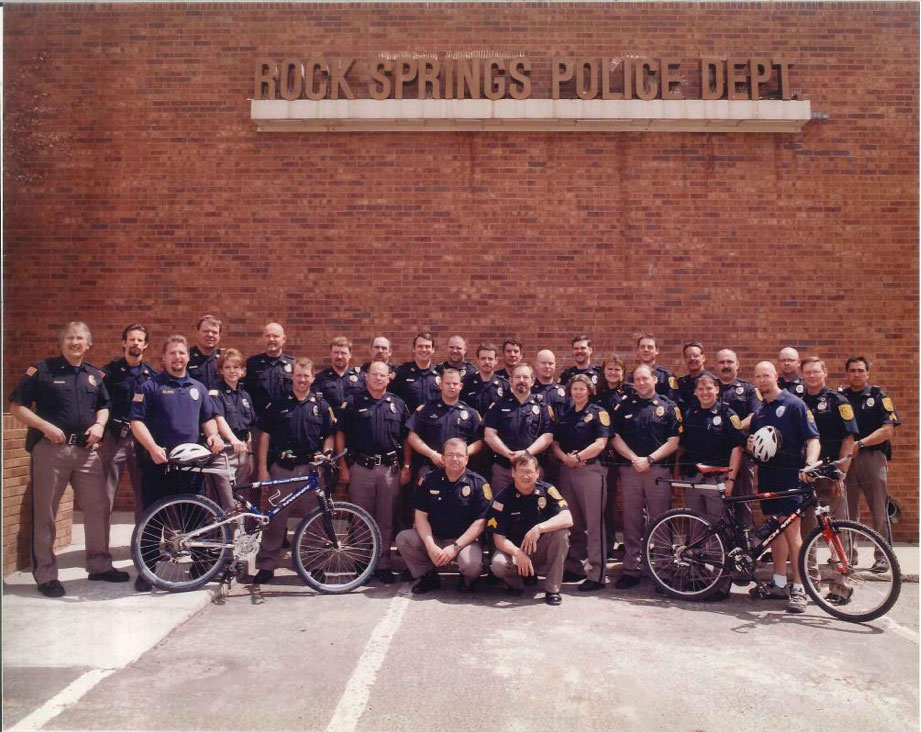 “It’ll be 29 years in August” with the RSPD, Pacheco said.

Before that, Pacheco spent time in the Air Force with law enforcement. Pacheco was appointed Rock Springs Police Chief in January 2015 and new Mayor Tim Kaumo reappointed him to that position last January.

Pacheco echoed many of Keslar’s sentiments, but he said that the times we live in have forced some changes in police work. Over his nearly 30 year career, Pacheco has seen many changes take place, one of which includes dealing with illegal drugs.

Illegal drugs have been around for a long time, but the opioid crisis has added an entirely new dimension to the problem, along with methamphetamine. Pacheco described crystal meth as “crank on steroids.”

Beginning in the 1990s the RSPD began having a “drug box” at their headquarters so that citizens could dispose of empty or partly full containers of legal drugs which could potentially be used in an illegal manner if they fell into the wrong hands.

A Focus on Community’s Youth

Other changes include the police’s involvement with the community’s youth.

“School resource officers came in during the 1990s,” Pacheco said.

Currently, RSPD has three officers assigned to SRO duties among other responsibilities. Moreover, there is a police sergeant, a corporal and two police officers specifically working with youth in the community.

“We also have our junior police academy during the summer,” Pacheco added, giving young people a knowledge of how police work is done and why it is done in the way that it is done. RSPD likewise helps to sponsor youth camping by the Wind River in conjunction with the Board of Cooperative Educational Services.

When Pacheco started at RSPD, the Drug Abuse Resistance Education (DARE) program emphasized drug avoidance, which it still does. Today, though, there is also an emphasis with young people about how to make proper decisions in life, avoiding not only drugs but gangs and violence.

“We focus on youth vulnerabilities today versus what they were yesterday,” Pacheco said.

Community Relations and Humanizing the Officers

Pacheco agreed with Keslar that community relations are vital for police work.

“With social media today and police shows on television, we need to let the community know that we’re real people on the police force,” Pacheco said. “We follow through with complaints. We have body cameras that record police work. There’s also security cameras around everywhere. If there is a complaint against a police officer, we investigate to see if there was a violation of our police policies or if it is a matter of a person’s perception.”

Acknowledging the negative publicity that police have sometimes gotten in recent years, Pacheco said that it is important for the public to allow the investigative process to go through when there is a complaint about police behavior.

“People see a snippet of information on social media but they don’t see the whole picture,” Pacheco said. “Half-information doesn’t serve anybody well.”

The RSPD does make efforts to reach out to the public through events such as the annual “Blue Mass” honoring policemen and first responders at Holy Spirit Catholic Community, and through the recent Open House at the police headquarters showing the facilities “so the public can see their tax dollars at work,” Pacheco said, and the awards banquet honoring police officers who have merited special recognition during the past year.

“These are ways of putting faces to the names you read about in the paper,” Pacheco explained.

In the age of technology, police officer’s have body cameras that record every interaction an officer has with a citizen. This notes a big change from when Pacheco started in the police force.

“Back when I started in police work we were told to do everything as if you had a camera on your shoulder,” Pacheco said. “Now, we do have cameras. Most of our guys do it right, and they do it right out of a sense of integrity, not out of fear of negative publicity.”

This is Part 2 of a three-part series on the evolution of local police work, with historic photos courtesy of the Rock Springs and Green River Police Departments. Keep your eye out for the next installments. Check out part 1 of The Evolution of Local Police Work Through the Decades.