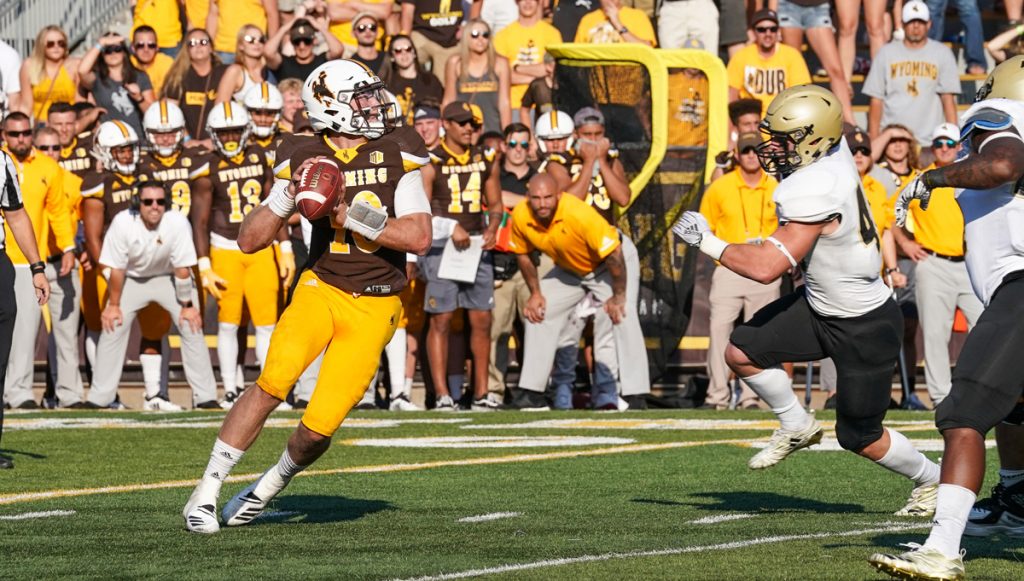 The Cowboys improved to 2-2 with the win. It was the first loss of the season for Wofford.

Trailing 14-10 with 7:27 remaining in the game, the Wyoming defense came up with a big defensive stand and forced a punt to give the Cowboy offense the ball at its own 20-yard line.

The Pokes proceeded to drive 64 yards in nine plays and had the ball at the Wofford 16-yard line when UW redshirt freshman quarterback Tyler Vander Waal was hit from his blind side as he was throwing the ball.

Wofford linebacker Weston Rountree intercepted the pass at the 15-yard line and returned it to the 31, with only 3:25 left in the game.

But the Cowboy defense would respond again allowing the Terriers only 22 yards on the ensuing drive.

Wyoming head coach Craig Bohl called all of his team’s three timeouts during the series to conserve time and after Wofford punted the Pokes had 1:59 remaining in the game with the ball again at its 20-yard line.

Vander Waal showed the compsure of a veteran QB on the final drive for the Pokes. He completed six of 13 passes for 79 yards and connected with five different receivers. He started off the series by hitting wide receiver Raghib Ismail Jr. on a 17-yard pass.

On a third and 10, Vander Waal connected with wideout Austin Conway for 12 yards. Vander Waal hit senior receiver James Price on a 16-yard pass on the next play taking the ball down to the Wofford 35-yard line.

After a five-yard penalty on the Cowboys for an ineligible receiver down field, Vander Waal found tight end Tyree Mayfield. Mayfield broke a tackle and took the ball 15 yards down to the Wofford 25.


Ismail Gets the Cowboys the Lead

Two incompletions followed and on third and 10 Vander Waal scrambled away from pressure and gained six yards. Facing a fourth and four at the Wofford 19, the redshirt freshman quarterback threw a pass in the flat that redshirt freshman running back Xazavian Valladay made a nice shoe-string catch on.

Valladay turned and gained 10 yards before being tackled out of bounds at the nine-yard line. An incompletion on first down led to Wofford calling its final timeout of the game. On second and goal from the nine, Vander Waal hit Ismail on a crossing route and Ismail fought his way into the end zone to give the Cowboys the lead.

Senior place-kicker Cooper Rothe tacked on the extra point to make the score 17-14 in favor of Wyoming with 17 seconds remaining in the game.

Wofford quarterback Joe Newman was forced to scramble for five yards on the first play of the Terriers’ final possession. On second and five, Newman’s pass was intercepted by Cowboy senior linebacker/nickel back Chavez Pownell Jr. to seal the victory. It was the first interception of Pownell’s career.

After the game, Cowboy head coach Bohl was encouraged about the poise his team showed.

“A couple thoughts that I had written down (before the game) that were going to be deciding factors were the steady hand wins and to stay positive,” said Bohl. “Those two themes really carried us on. There was certainly adversity during the course of the game.

“At times we didn’t play particularly well. Wofford had a good plan. They play really hard and are a program that has no quit in them. We knew we had to play well, and I don’t think we did that through portions of the game. It put us behind the eight ball, but our guys answered the bell.

“We had a couple of good fourth-quarter drives which is a sign of a steady hand and staying positive. Going through the stretch we have, not only do we have some injured guys, but we were physically beat up headed into this game. Our mantra was just get to 1-0 this week. Now, we need to use this bye week and get ready for conference play.”

Vander Waal ended the day completing 25 of 42 passes (59.5 percent) for 224 yards. He threw the first two touchdown passes of his career — the game winner to Ismail and a six-yarder in the second quarter to Mayfield.

Valladay led the Cowboys in rushing with 57 yards on 15 carries and added three receptions for 23 yards. Conway led the way for the Cowboy receivers, catching a career-tying high 11 passes for 89 yards.

Price tied a career high with four receptions for 43 yards, and had one rushing attempt for 15 yards. Mayfield ended the day with three catches for 38 yards and a TD, and Ismail had three catches for 29 yards, including the game-winning TD reception.

“For a quarterback to manage a two-minute drive, there are so many variables,” said Bohl. “That’s one of the harder things in sports because you’re looking at managing the clock, protections, formations and you have to improvise some things. I thought Tyler did that.

“Coming up with the touchdown pass was great and there were several key plays in that drive. We had some adversity in the previous drive, made great strides getting down the field but then had the turnover.”

And what did Bohl have to say when asked about the play of his offensive line?

“I thought our protection by the offensive line got better, which allowed Tyler (Vander Waal) to get some throws off. Wofford did a nice job against our running game, and we’ve got to continue to work on that.

“Particularly later in the game, I thought the amount of time Tyler got from his first read to his second was excellent.”

When asked about his thoughts on the game, Vander Waal said, “I just tried to be calm. I told the guys before we went out there that ‘we have two minutes to go 80 yards and score.’ We worked too hard in the summer to not win this game.

“I think everyone was fired up to get out there. We knew we had this drive in us. We have worked hard in practice on a two-minute drill and it paid off today.”

Regarding the play of his offensive line, the redshirt freshman quarterback was more than happy to praise them for their play.

“All credit to them (Wyoming offensive line),” said Vander Waal. “They did a heck of a job today. When Patrick (Arnold, center) got hurt today, Logan Harris stepped up and was ready to go. I can’t give them enough credit for how much time they gave us today.”

The Cowboy defense also performed at their best in the fourth quarter. UW’s defense was led by senior strong safety Andrew Wingard, who recorded his second consecutive 12-tackle game this season. Wingard also intercepted his first pass of the season and ninth of his career in the third quarter.

Crall also had Wyoming’s one sack of the day for 10 yards. Pownell added five tackles to go with his game-ending interception.

Junior defensive tackle Youhanna Ghaifan forced a Wofford fumble that was recovered by senior nose tackle Sidney Malauulu, who lateralled the ball to junior cornerback Antonio Hull, who returned it 15 yards to set up Wyoming’s first score of the day.

The first quarter was dominated by the defenses, as the first period ended in a scoreless tie. Wyoming ended the quarter with 62 yards of total offense on 16 plays. The Wofford offense managed only 39 yards on 11 plays.

In the second quarter, Wyoming scored first when Ghaifan stripped the ball loose from Wofford fullback Andre Stoddard at the Wofford 32-yard line. The fumble was picked up by Malauulu. Malauulu carried the ball seven yards to the 25 then lateralled the ball to senior cornerback Antonio Hull, who ran for another 15 yards down to the Wofford 10-yard line.

Valladay carried for one yard on first down. Vander Waal carried for six yards on second down, followed by an incomplete pass from Vander Waal to junior wide receiver Raghib Ismail Jr.

Junior place-kicker Cooper Rothe came in on fourth and goal and kicked a 20-yard field goal to give Wyoming a 3-0 lead. It was Rothe’s ninth consecutive field goal made, dating back to the 2017 season. He is a perfect six of six in field goals this season.

On the very next series, Terrier running back Lennox McAfee broke off a 44-yard run from the Wofford 35-yard line down to the Wyoming 21.

From there, Wofford fullback Stoddard took over with a run of four yards, followed by an illegal substitution penalty of five yards on the Cowboys. Stoddard added runs of six and four yards for the touchdown. The extra point by Luke Carter gave the Terriers a 7-3 lead.

Wyoming put together one of its best offensive drives of the season on its next possession. Starting at their own 25-yard line, the Cowboys drove 75 yards in 11 plays, with Vander Waal accounting for 51 yards on the drive.

He completed 4 of 6 passes for 28 yards and he had three rushes for 23 yards, including a key run of 16 on a scramble for a first down on a third and eight from the Wofford 46-yard line. Vander Waal concluded the scoring drive with the first touchdown pass of his career, a six-yarder to Mayfield.

It was Mayfield’s second career TD reception and first since his freshman season of 2015.


No Scoring in the Third Quarter

Four plays into the fourth quarter, Terrier quarterback Newman, after faking a handoff, kept the ball and ran around the right edge of the Cowboy defense for a touchdown to give Wofford its second lead of the game at 14-10 with 13:06 left in the game.

A big statistic for the Cowboys was once again turnovers. Wyoming created three takeaways — recovering one Terrier fumble and intercepting Wofford twice. The Cowboys committed only one turnover when Vander Waal was hit while throwing the ball in the fourth quarter.

The Cowboys have a bye week this coming week before opening Mountain West Conference play on Saturday, Sept. 29 when they will host Boise State in a game that will kick off at 5 p.m. Mountain Time.

The Cowboys (2016) and Broncos (2017) have won the last two Mountain West Mountain Division titles and have split the last two regular-season meetings, with Wyoming winning at home in 2016 by a score of 30-28 and Boise winning last year at home by a score of 24-14.