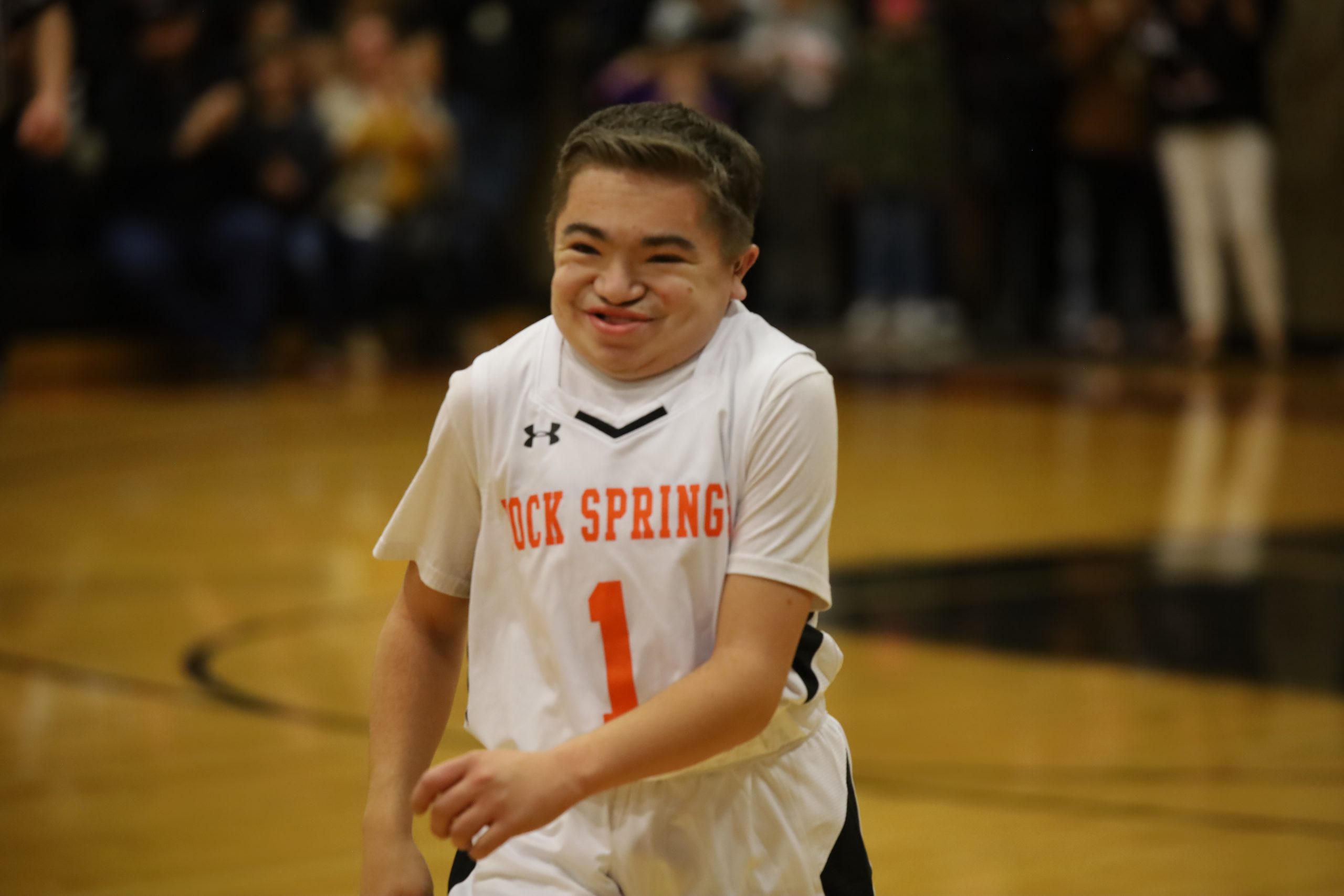 Braxton Patterson is all smiles after scoring the first points of Friday's senior night game against the Kelly Walsh Trojans. Photo by Brayden Flack.

ROCK SPRINGS — The Rock Springs Tigers statement victory over the Kelly Walsh Trojans was overshadowed by a greater story than the game itself. Friday night’s senior night game was a reminder of what it means to be human.

Senior Tiger basketball member Braxton Patterson has spent his entire life on the sidelines during sporting events. From seventh-grade football to his senior year of high school, he has assisted players and taken care of his teammates. While it has often been his friends in the spotlight, he has sat on the sidelines and supported them for years.

Patterson stepped onto the court for the first time in his life during the Tigers’ senior night against Kelly Walsh. Suited up in his white and orange jersey and laced up Donovan Mitchell basketball shoes, he was given an opportunity to live his dream.

As cheers erupted and phones recorded the moment, Patterson caught a pass from Tigers’ guard Justis Reese and finished with a bucket, scoring the first points of the game.

The moment was surreal. Unforgettable.

Reese approached head coach Jeremy Main about putting Patterson in the starting lineup for senior night. The two came to each other and decided it was a worthy effort to pursue. Main contacted Kelly Walsh head coach Randy Roden to see if they would support the idea of putting Patterson in the game. Originally, the strategy was to foul Kelly Walsh if they lost the opening tip and then take Patterson out of the game. After reading the e-mail, Roden suggested they give Patterson a chance to score the first two points of the game instead.

“It was a group effort,” Main said. “It was Roden’s idea to get him a shot up so it worked out. We strategized. Justis got the assist, Patty knocking it down. It was an awesome moment.”

“Thinking about it all week long, I was more nervous for that moment than I was for the game,” Main said. “There was so much emotion. I made eye contact with my wife and we were both crying.”

“He finally did it,” Reese said. “He finally got to play basketball with us and it was just emotional.”

“He’s like my brother,” Reese said. “He’s done everything for me since seventh grade. He’s just been there for us.”

Patterson’s two points to open up the game turned out to be more scoring than the entire team of Kelly Walsh would put up in the first quarter. The Tigers held the Trojans to a single point in the opening quarter.

“It was a dream come true,” Patterson said. “I haven’t been able to do stuff like that my entire life. Finally being able to live my dream and go play on the court with my boys, it’s just a great memory. I’ll never forget it.”

Patterson’s love for the game and the two teams coming together to recognize his passion for basketball is a simple reminder of the power and influence that sport carries.

Patterson will finish out the season as a manager for the Tigers. He plans on helping the Tigers reach the playoffs and hopefully earn a state title.

“I just help the guys out. Whatever they need. I’m there for them,” Patterson said.

Going forward, Patterson is planning on continuing to manage basketball for the Western Wyoming Community College Mustangs while getting a degree in exercise science and pursuing a career in basketball scouting.