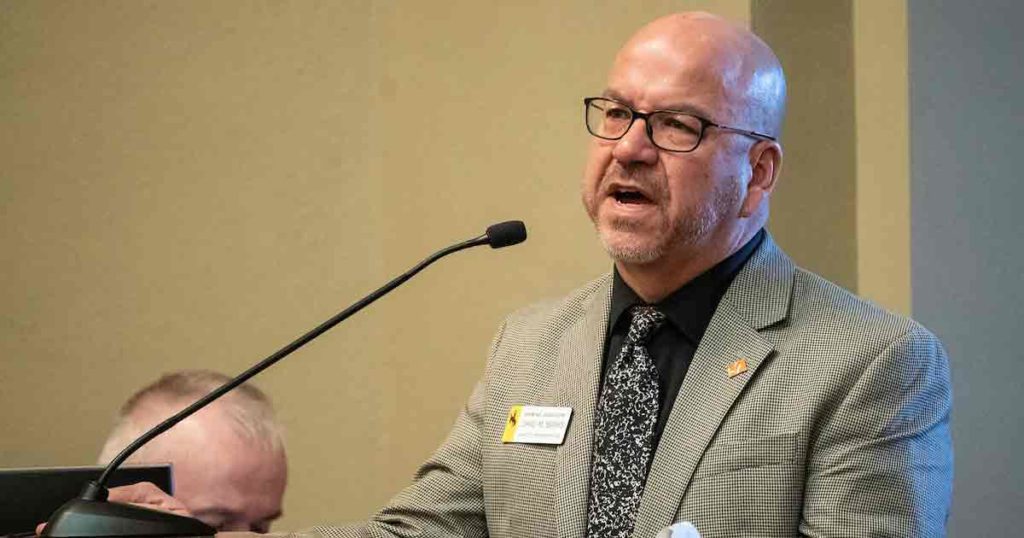 CHEYENNE — A bill that would prohibit the release of a person’s mugshot unless they have been convicted of a crime has made it onto the Wyoming House of Representatives’ General File for review.

In a 5-4 vote Monday the Wyoming Legislature’s House Judiciary Committee recommended a do pass with an amendment to House Bill 51 – which prohibits the release of mugshots unless convicted.

The bill is sponsored by HD 17 Representative Chad Banks of Rock Springs who explained to the committee why he created the bill. During his testimony Monday, Rep. Banks said Sweetwater County currently has three news media sources that publish mugshots with arrest reports online every morning. He said this has led to rumors and gossip throughout the community about those in the arrest reports.

“Those mugshots stay around forever regardless of whether those people are ultimately charged or those charges are dropped…” Rep. Banks said.

Banks said Sweetwater County Sheriff John Grossnickle is in support of the bill. He said Grossnickle told him he doesn’t feel the statute allows for him not to provide mugshots and fears legal pushback under the current statute.

Rock Springs business owner Wing Lew spoke in favor of the bill saying he wanted to share his personal experience with the committee. Lew said he was on his way home back in May of 2020 when he was pulled over for failure to maintain a single lane of travel. Lew said he passed the alcohol breathalyzer test both in the field and at the detention center, but failed the field-sobriety test because he couldn’t stand on one leg.

He was then asked to take a blood test at the hospital. On his trip back to the jail, he was told he was bonded out, but they still needed to book him and take his mugshots. He was charged with failure to maintain a single lane of travel and driving under the influence – controlled substance.

Lew said once he was released and he spoke to his attorney, he called two local media outlets and explained what had happened and asked them not to publish his mugshot. They agreed, but he failed to reach a third outlet, which then published his mugshot the next morning.

“I was pretty disappointed and very, very mad,” Lew said.

State toxicology results showed Lew was clean of any drugs or alcohol, but he didn’t get those results back until July. He said he felt ashamed and embarrassed during the time the results were pending. All charges were dismissed after the toxicology report came back.

The media outlets are quick to publish arrests, but they take no responsibility in any publication of dismissals.

Rock Springs Police Chief Dwane Pacheco also favors the bill saying “the court of public opinion is automatically guilty” even when a press release states all parties are presumed innocent until proven guilty.

Pacheco said the system worked in Lew’s case because the officer had probable cause to make the arrest, and the charges were dismissed when the results came back.

The committee decided to amend the proposed bill following the public comment period to make it more clear. The committee didn’t want to limit law enforcement agencies and so it decided to simplify the bill.

The following lines were struck from the bill:

And replaced with the following amendment:

Another amendment was proposed by Rep. Dan Zwonitzer which would have prohibited any publisher from using a photograph of an individual suspected of a crime for financial or personal gain, but is was not approved.