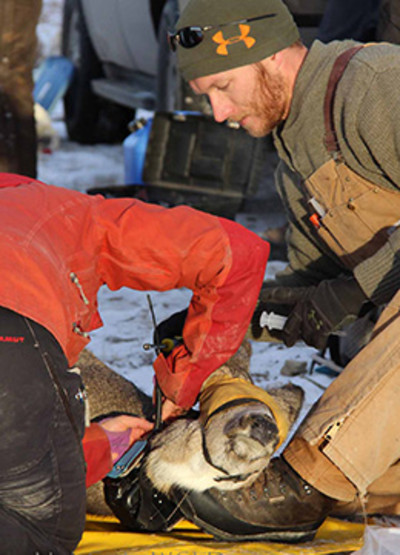 WYOMING — University of Wyoming researchers are leading a fast-paced research project to try to understand what has contributed to mule deer declines throughout the West and determine if competition with elk is playing a role.

Contributions from the Wyoming Game and Fish Department and a grassroots fundraising effort led by the Muley Fanatic Foundation launched the $1.3 million research project. Interested organizations or individuals can contribute much-needed funding to the project by adopting a deer, whose progress they will be able to follow online throughout the study.

For the Deer-Elk Ecology Research project, or D.E.E.R. project, researchers this month are capturing and collaring 50 female mule deer and 35 elk in the high desert south of Rock Springs. They also will track newborn fawns and gather data on diet composition and nutritional condition of the animals at key times of year.

Kevin Monteith, assistant professor at the Haub School of Environment and Natural Resources, and the Wyoming Cooperative Fish and Wildlife Research Unit, oversees the project. Ph.D. student Matthew Hayes is the project leader.

The research aims to reveal interactions between mule deer, whose populations are declining in many areas of the West, and elk, whose populations are generally increasing. The scientists will use GPS collar data, fawn survival, spring and fall body fat assessments, fecal analysis and habitat changes through time to determine if and how deer and elk compete for resources in areas where their habitat overlaps. Hayes also will investigate how predation from coyotes and mountain lions may be influencing the deer populations.

Researchers will collect and analyze detailed movement, survival and nutrition data for nearly every demographic component of the deer population: young males, adult females and even fawns. This will be only the second study in Wyoming to monitor survival and cause of mortality for newborn deer, and the first to track males.

In particular, the south Rock Springs herd has fewer yearling male deer than expected given the number of fawns born each year. The research will reveal what is happening to the young male deer — such as whether they are dispersing or dying.

This project aims to provide critical information about deer declines, necessary for resource managers to make informed decisions for population and habitat management throughout the West. The Wyoming Game and Fish Department, the Muley Fanatic Foundation, several local Muley Fanatics chapters, the Wyoming Governor’s Big Game License Coalition and others have contributed funds to initiate the research.

Deer captured in November 2015 already are contributing information for the study. The researchers seek additional support to see the project through to completion and to cover the costs of GPS collars, helicopter captures, lab analyses, field technicians and other expenses.

To contribute or adopt a deer to support the D.E.E.R. project, visit www.deerproject.org. Supporters who adopt a deer will be able to follow its progress online throughout the study. 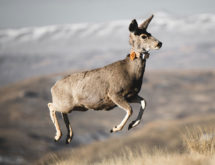 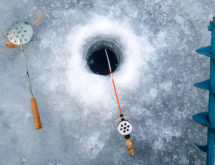