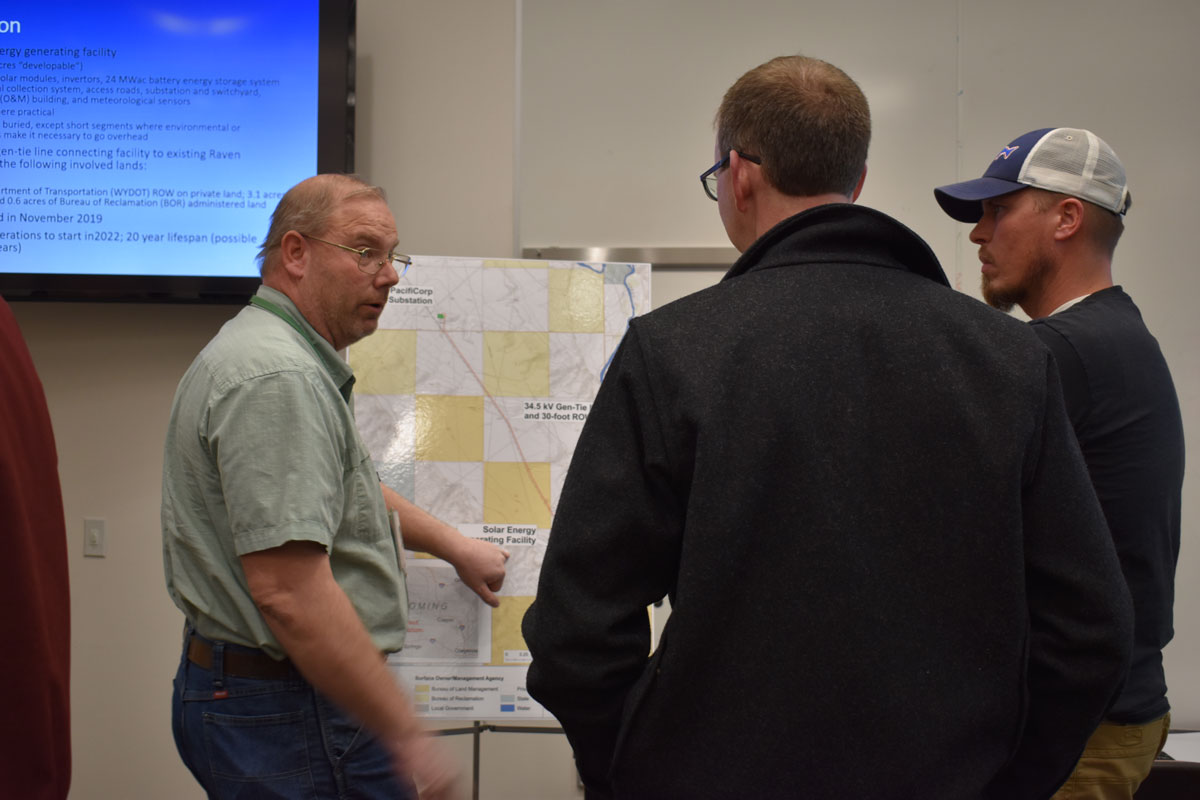 If approved, the solar farm would be located 14 miles from Green River and six miles north of I-80. It would be situated on both sides of Wyoming Highway 372, La Barge Road.

The facility would be located on nearly 400 acres of public land administered by the BLM. In addition to the solar farm, there would also be a 3.9-mile long underground gen-tie line connecting the facility to the existing Raven substation.

Before the BLM decides to approve, approve with modification, or deny the issuance of a ROW grant, they must put together an EA with public comment.

Nikki Maxwell, BLM High Desert District Public Affairs Specialist, said it is important to the BLM to hear from as many residents as possible.

“We don’t want anyone to feel like they weren’t informed or that they didn’t know they could make a comment,” Maxwell said.

The original deadline for public comment was February 27, however due to a few requests, the BLM is extending that by 14 days. Therefore, the public comment period deadline will be March 12.

Currently, the land for the proposed project location is used for industry and transportation uses such as underground pipelines, highway, rail line, gravel quarries, and trona mining and processing. It is also near the location of Sweetwater Solar.

Though Sweetwater Solar and the Raven solar project are not tied and will not connect, they are adjacent to each other. This raised some public concern for the big game migration, particularly pronghorn.

The project area is inside crucial winter and year-long pronghorn range, as well as greater sage-grouse general habitat.

Kimberlee Foster, BLM Rock Springs Field Office Field Manager, said the BLM has received a number of concerns for the pronghorn migration. However, she noted that the project area is not in a designated corridor.

Since the Sweetwater Solar facility was constructed, there has been an issue of pronghorn getting bunched up and trapped in the fencing along La Barge Road. Foster said during the Sweetwater Solar EA, they did request the company to redesign and cut off the Southwest corner of the farm for migration. However, a problem still persists.

The Raven Solar project will also have to have fencing, so the concern extends to this proposed project.

In Support of Solar, Against the Location

Kenilynn Zanetti, Sweetwater County resident and former Wyoming House Representative, said she feels as though the concerns regarding pronghorn migration are not being taken seriously. With the issues surrounding Sweetwater Solar, she struggles to understand why this proposed solar farm would be placed in the same area.

“This is Wyoming, the sun shines everywhere, and they’re choosing to put it right in the migration route,” Zanetti said.

Michelle Irwin, resident and Powder River Basin Resource Council Consultant, said this is a “bad project”. She also emphasized that they definitely aren’t against solar, but rather are against the location.

“This will just add to the problem that already exists out there, and nobody seems to care,” Irwin said.

Joyce Corcoran, former Mayor of Lander and former Rock Springs councilwoman, said some people at the open house were talking about diverting big game with tunnels under or over the highway. However, Corcoran, Irwin, and Zanetti do not believe that will solve this issue.

Resident Carolyn Malson said her son grew up here and now lives in Seattle but he loves to come back and visit because of the access to public lands.

“They don’t have public lands like this in Washington state,” Malson said. “We need to preserve the land and the animals so we can leave our children a legacy of what Wyoming is.”

Other concerns for the solar farm are the visual aspect, as some believe it will be unsightly.

Foster said people can see the Sweetwater Solar facility from a long way away, however, that solar farm is bigger than the proposed Raven Solar farm.

According to Foster, the Sweetwater Solar farm is about 80 megawatts and is 460 acres, whereas the Raven facility is 66 megawatts and 395 acres.