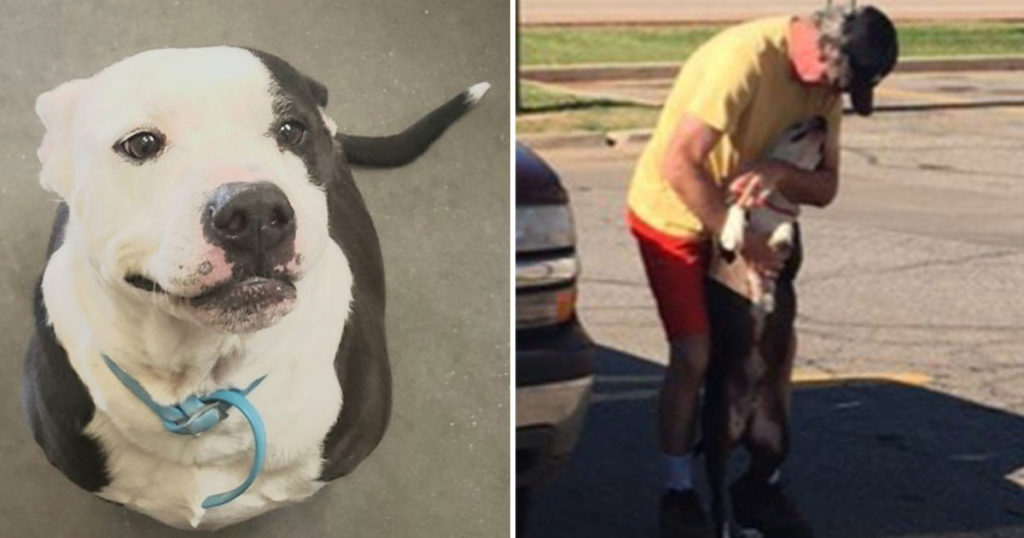 Blu was rescued in April by Green River Animal Control and was reunited with his dad in Oklahoma over a month later. Courtesy photos

GREEN RIVER — In honor of National Animal Rescue Day, which was May 20, Green River Animal Control and Green River Police Department have chosen to share a story about a dog named Blu.

On April 10, 2020, Green River Animal Control impounded a stray Pit Bull on Flaming Gorge Way. He was covered in fleas, so they gave him a bath, a warm bed and food and water.

The Pit Bull, Blu, was held for five days to give his owner a chance to re-claim him. With hope of an owner claiming him slipping away as the fifth day arrived, they received a lost dog report for a lost Pit Bull. Animal Control contacted the owner and learned they had been stopped six miles out of town and “Blu” had wandered off.

The man was unable to find Blu and had to leave to go back home to Oklahoma, without his dog. Blu, being a survivor, had traveled six miles in to Green River where he was picked up by Green River Animal Control.

Due to the Covid-19 Coronavirus pandemic and financial reasons, the man was unable to come get Blu right away. He had to first secure some money to make the long drive back to Wyoming.

Animal Control kept in touch with Blu’s owner and as days turned into weeks, it looked like Blu’s dad would not be able to afford to come get Blu.

Animal Control wanted Blu to be able to go home to his dad, so ACO/Rescue staff member Lydia Holmes started on a mission to try and find a transport for Blu. She was able to secure a transport for Blu, but not all the way. She could get him ninety-five miles away from where Blu’s dad was in Oklahoma.

On May 19, Blu was on his journey home. Although Blu was happy here, he was glad to be out of quarantine and on his way back to his daddy.

Animal Control received word and a picture that Blu and his dad had been reunited and they were both very happy.