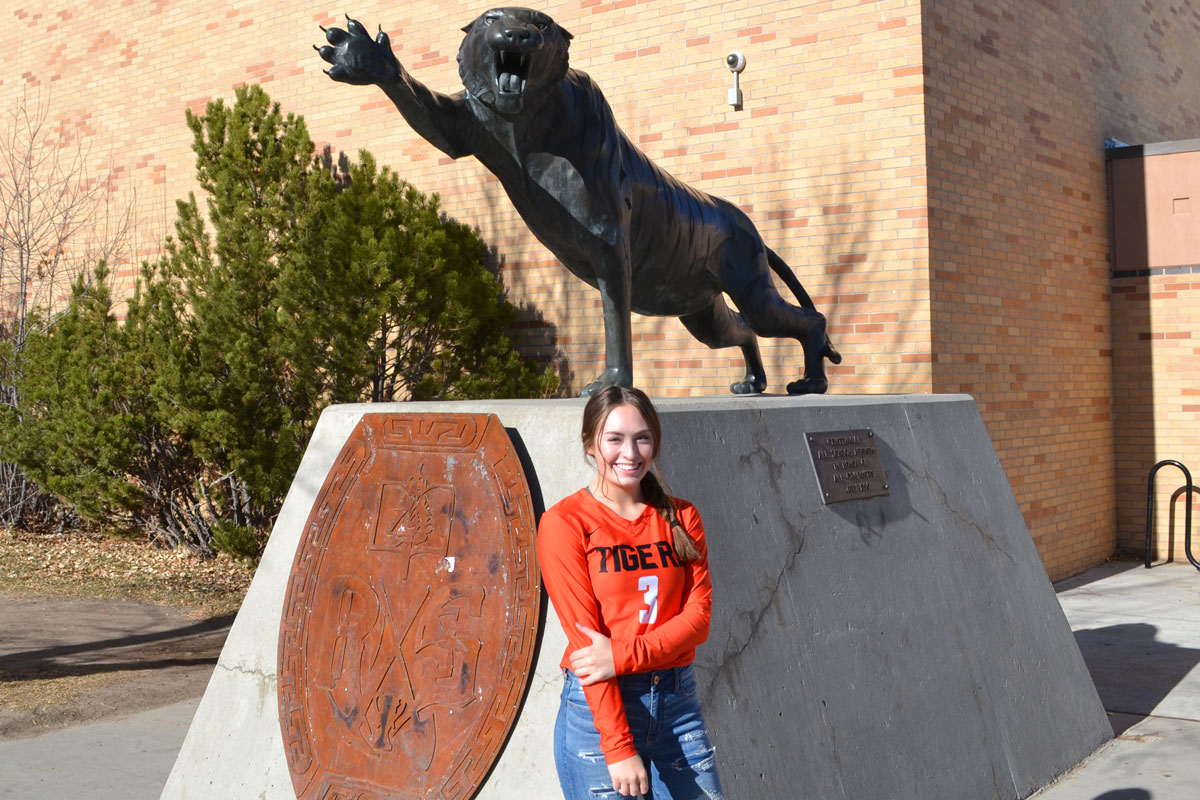 ROCK SPRINGS– The Wyoming high school volleyball season wrapped up this past weekend, in which the Rock Springs High School Lady Tigers made their first state appearance since 2012.

The Lady Tigers took second place at the 4A West regional tournament to qualify for the state tournament for the first in seven years.

Along with a successful season for the team, senior libero, Rhys Brandt, finished her season with All-Conference and All-State honors, and earned 4A West Defensive Player of the Year.

“Receiving these honors is just the most rewarding feeling, and it taught me that hard work truly does pay off,” Brandt said. “It was great way to end my high school career.”

Brandt is not new to receiving accolades for her athletic accomplishments, however, as she also received All-Conference honors in 2018 as a junior as well.

In addition to volleyball, Brandt is an All-Conference and All-State track athlete. She is part of the 4×200 meter relay team that won the 2019 indoor track state championship and holds the Rock Springs High School school record.

Despite her success in track, volleyball is Brandt’s favorite sport and has played an important role in her life.

“I began playing volleyball when I was in 7th grade, but my love for the game didn’t arise until I was a sophomore in high school. That’s when I started playing at a higher level, harder hits, harder serves, and just a faster game. I loved it.” Brandt said. “Not only is it my favorite thing to do, but it’s also where I met some of my best friends and my amazing coaches.”

Part of what makes Brandt such a crucial player to have on the court is the emphasis she puts on playing collectively as a team, rather than as an individual.

“In any sport, being a team player is important, but especially in volleyball. Nobody can win the game by themselves . At least 2-3 people have to touch the ball each play. Every individual plays an important role on the volleyball team, which is crucial for the team’s success,” she said.

Brandt’s role on the Lady Tigers volleyball team has been the position of libero, which she started playing when she was a freshman. The libero is the defensive specialist of the team.

“My responsibility as a libero is to deliver the ball accurately and consistently to my setter on both serve receive and defense,” Brandt said.

As most people know, good things come to those who work hard for them. Brandt is a testament to this. When the volleyball season ends, Brandt’s dedication to the sport continues on.

“A lot of work happens in the off season for me. I played club volleyball in the spring, attended open gym in the summer, went to camps, and lifted weights. So quite a bit of work goes into volleyball for me,” she said.

All of the hard work has definitely paid off in Brandt’s case. So what’s next for this Lady Tiger?

“I am definitely planning to attend college, and I am interested in playing collegiate volleyball, but right now my plans are undecided,” Brandt said.