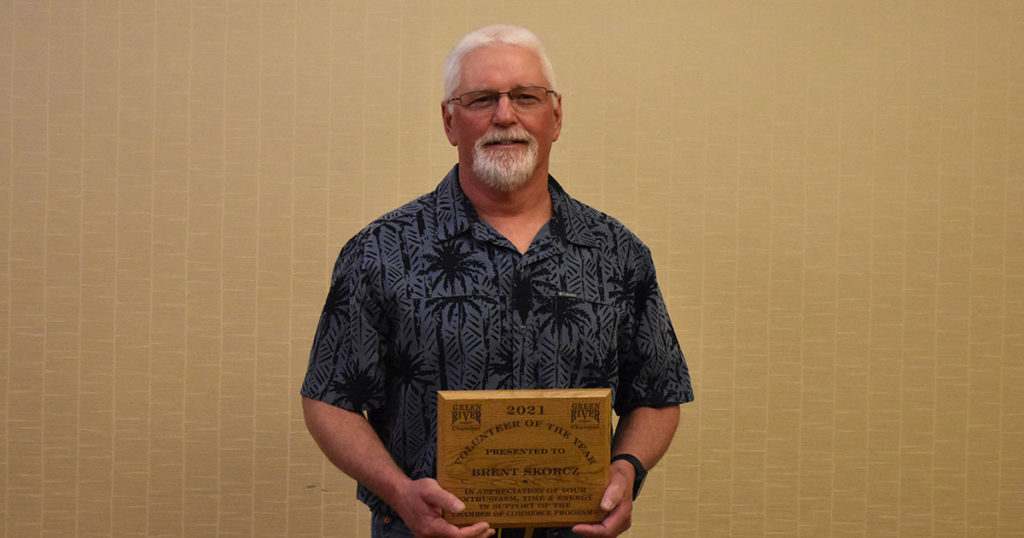 Brent Skorcz was honored with the Green River Chamber's 2021 Volunteer of the Year award Wednesday.

GREEN RIVER — During the 2022 Green River Chamber Awards Luncheon on Wednesday, Brent Skorcz was honored with the 2021 Volunteer of the Year award for his work with the mountain bike trails in the area.

Green River City Councilman Mike Shutran presented the award and explained the importance of volunteers such as Skorcz.

“In some cases, great volunteers have an innate ability to unknowingly spread their knowledge and passion to those around them. These impacts are far reaching,” Shutran said.

Shutran went on to say that Green River has some of the best mountain biking trails in the western United States, and much of that is due to Skorcz’ efforts and dedication.

“It’s no big secret that Green River, Wyoming boasts some of the best single-track mountain biking trails in the western United States. The Wilkins Peak Trail System was voted the most popular mountain bike trail system in the great state of Wyoming. This well-known fact was not merely an accident, though, and the visionary individual I’m about to introduce has been very instrumental in creating these mountain bike trails systems and putting our little piece of heaven here in the 307 on the map once again,” Shutran said.

Skorcz got his first mountain bike in 1986 and began his two-wheeled adventures on local game trails, dirt bike trails, and old two-tracks. With his friends, Skorcz started creating his own trails, including trails that are well-known to mountain bike enthusiasts throughout the area.

In 2008, Skorcz formed the Sweetwater Mountain Biking Association (SMBA), a nonprofit established for the ethical use of public lands for the education and preservation of the sport of mountain biking. In 2009, with the help of the Green River trails consultants, Skorcz designed and created the Green River Bike Park.

Skorcz also started Trails Day in 2018, an annual event that raises awareness of the Wilkins Peak Trail System and the sport of mountain biking in Southwest Wyoming. This event allows riders of all ages and abilities to receive information and guidance for an activity that can be enjoyed right here in Green River. It also raises funds for the SWMBA so they can continue building trails and spreading the sport to more people in the community. This year’s Trails Day will take place on June 3 and 4.

“When he’s not out ripping on the local trails, [Skorcz] works with different entities to legalize mountain bike trails, build signage, and develop maps for the Wilkins Peak Trail System. He can often be found cleaning up the trails in surrounding areas so others can enjoy these just as nature intended us to: untouched,” Shutran said.

Skorcz also promotes tourism by encouraging visitors to enjoy the trails system, and he even helps guide people on the trails.

“His passion for the area and his great stewardship of the natural resource make him a great candidate for this recognition,” Shutran said.

Skorcz said receiving this award is a “nice feeling” as it shows him that his work on the trails is being recognized by at least someone. He said many people come and ride the trails and take them for granted, and this award lets him know that there are people who appreciate them.