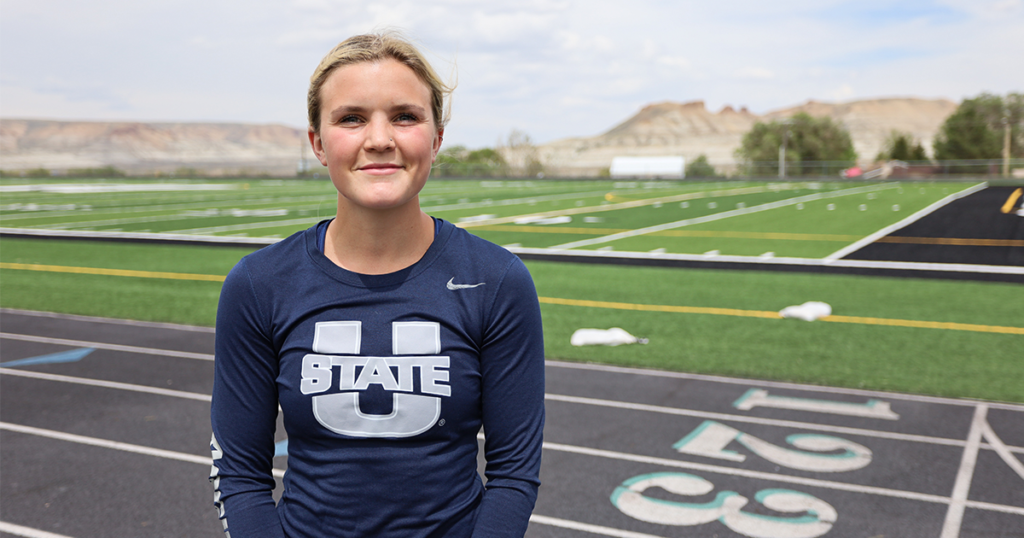 Josie Evans is back in Green River for the summer after graduating from Utah State University. Photo by Brayden Flack.

Whether it’s competing in a tight race or hitting the pavement for a run with friends, long distance running has been a part of Josie Givens life for many years.

The former Green River High School (GRHS) star runner recently graduated from Utah State University, where she ran cross country and track for the Aggies. From making history with her team to graduating with her degree, there’s been a lot of growth and achievement since she left Green River.

Now, Givens is back home in Sweetwater County for the summer while she prepares her next steps in life. Looking back on the countless lessons and memories over the past four years from her running career with the Aggies, she’s positive those experiences will provide a solid foundation for her life moving forward.

From Quitting to Winning

Givens wasn’t a huge fan of running when she first stepped onto a track. In sixth grade, she decided to seize the opportunity to try out for the school’s track and field program. Part of the tryouts required all young, hopeful athletes to run two miles around the track.

“I had never run a day in my life,” Givens said. “The next day I couldn’t walk.”

Givens decided to quit the team after having a rough first experience with the sport. However, the guilt of quitting ate at her throughout the rest of the year, which soon turned into motivation. The very next year, when seventh grade tryouts for the track team came, she decided to once again give running a shot.

While attending GRHS, Givens spent most of her free time in her books and running. She was a member of the cross country, indoor track and outdoor track teams during all four years of her high school career.

Among her fondest memories at GRHS include running with her friends and training for cross country with a game of tag.

Hours of hard work and determination helped Givens put together a strong resume for colleges looking to add a seasoned runner. She finished three of her four cross country seasons with all-conference honors. During Givens’ senior year, she placed 4th at state in cross country, posting a time of 19:14.02. She also finished in the top 10 for most of her events in indoor and outdoor track. In the classroom, she graduated with a 3.98 GPA.

Doing what she loved to do naturally attracted many eyes at the collegiate level. Throughout Givens’ senior year, plenty of mail came her way. Most of the mail came from smaller schools. Although her mailbox was often bombarded, she took the initiative to reach out to a few NCAA DI schools to see if she could land a roster spot.

After reaching out to Utah State, the Aggies showed interest in Givens. She scheduled an official school visit and instantly fell in love with the team.

“I just knew it was the place I wanted to go,” Givens said. “I loved the team and the coaches and the interactions I had with all of them. It just seemed very comfortable to me.”

Among the smaller schools heavily recruiting Givens was Chadron State, who gave her a tempting offer. However, at the end of the day she could only picture herself running for the Aggies.

Throughout her four years with Utah State, Givens stuck with running long distance races including the mile, 3K, 5K and 10K.

One of Givens’ personal goals was to crack the five-minute mark in the mile. Her best unconverted mile time was 5:01, putting her just a second shy of her personal goal.

In the 5K, Givens broke into the top 10 best finishes in Utah State’s history, etching her name into the record books.

Givens was also a member of the first Utah State women’s team to make it to the national competition back in 2017. She traveled with the team to Louisville, Kentucky as an alternative. Although she didn’t get the opportunity to race, it was a memorable and historic moment for her.

In addition to her improvements as an athlete, Givens also admitted that she has learned many important lessons.

“Balancing school and athletics was completely different in college compared to here [GRHS],” Givens said. “I think a lot of that really challenged me to become better at a whole wide range of things.”

Givens said her knowledge concerning how to train has been a big takeaway from her time at Utah State. With that knowledge, she feels more prepared for how she will approach fitness for the rest of her life.

While training knowledge will serve her well for years to come, Givens also has major plans for her education. Recently, she graduated from Utah State University with her B.A. in Communicative Disorders in Deaf Education. Much like running, she’s found a similar passion for her education and future career.

“It was the same thing with finding the team,” Givens said. “I just loved the feeling of it.”

Now that she has graduated, Givens’ next step is to work towards earning her Masters. She was recently accepted into the program this week after applying at the University of Wyoming.

“I love school. I enjoy it thoroughly still, so that’s why I want to go into a Masters program,” Givens said.

Givens said that after obtaining her Masters she hopes to become a speech language pathologist in a school setting, although those plans could change at any time.

For now, she’s enjoying her time back in Green River with her family over the summer before taking the next step in her journey. 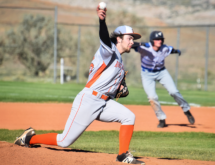 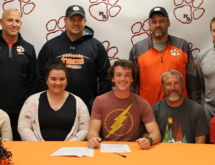