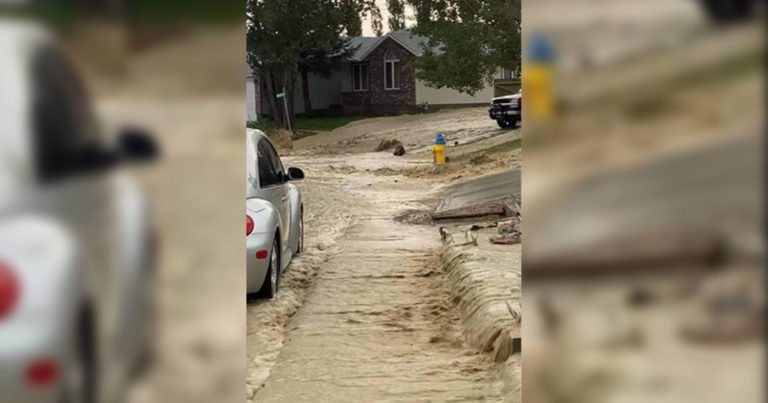 ROCK SPRINGS — Even though some of Rock Springs’ private and public properties sustained major damage during the flooding event that occurred around July 28, it wasn’t enough to qualify for Federal Emergency Management Agency (FEMA) grant funding.

On August 3, the Rock Springs City Council signed a Declaration of Disaster and State of Emergency in the City of Rock Springs and applied for FEMA grant funding. This occurred after parts of Rock Springs saw unprecedented rainfall over a three-day time period starting on July 28. In one case, it was reported that more than 2.5 inches of rain fell within a 20-minute period.

According to a press release from the Rock Springs Fire Department, “as a reference, the entire area of Sweetwater County normally receives 8.9 inches of rainfall during an average year. During that period, many homes were impacted by the runoff with damage ranging from mild to moderate and in some cases very significant.”

In a letter to RSFD Chief Jim Wamsley from Lynn Budd ,Wyoming Office of Homeland Security Director, states, “We have reviewed and analyzed all of the documentation. While it is evident that damage occurred and probably had a significant impact on the homeowners, the damage was not severe enough to qualify for assistance through FEMA’s Individual Assistance or Public Assistance programs.”

There are a few key items FEMA evaluates to make a determination including, whether the damages exceeded the state’s ability to provide aid, whether damages to public infrastructure exceeded a minimum of $1 million, and how the community as a whole was impacted.

FEMA looked at how many homes were either “destroyed” or sustained “major” damage. According to Budd’s letter, no homes were destroyed and 12 of them suffered “major” damage. The city helped gather information for FEMA by having residents who were impacted by the flooding fill out a survey. According to the RSFD, the survey had 88 responses. Costs were tabulated from information provided by those who had damage to their homes and through a City survey of public infrastructure impacts, the RSFD release states.

“To our knowledge, there were also no uninhabitable homes, no sheltering needed, no known casualties, no significant impact to community infrastructure or essential services (such as transportation and utilities), and no disaster related unemployment issues,” Budd’s letter states.

“While it is clear that damage occurred and impacts were felt by the homeowners and residents in the area, the damage was not severe enough to qualify for either of the FEMA programs mentioned,” Budd’s letter states.

During the Rock Springs City Council meeting last night, Rock Spring Mayor Tim Kaumo said he wasn’t surprised the city didn’t qualify for the funding, but it still had to try. He said the city will move forward with distributing the funds raised through Rockin’ from the Rain event.