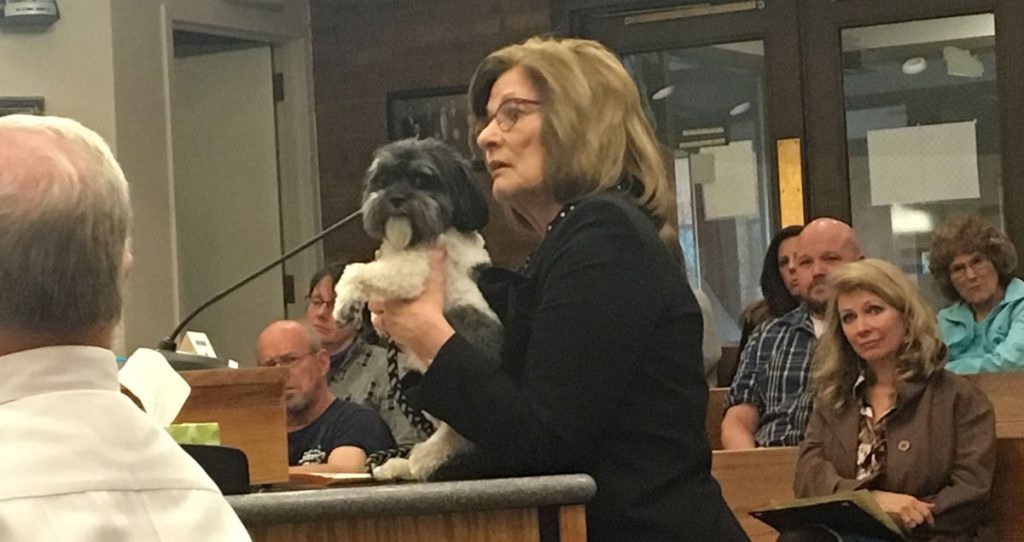 Community member and Representative of House District 17 JoAnna Dayton, with her dog Beau, speaks in favor of the ordinance that would prohibit the commercial sale of animals unless obtained from an animal shelter, non-profit resuce, or a humane organization.

ROCK SPRINGS– A few members of the community spoke out in support of an ordinance that would prohibit the commercial sale of dogs, cats, and rabbits to pet stores unless the animal is obtained from an animal shelter, nonprofit rescue, or humane organization at Tuesday’s city council meeting.

The ordinance, which went through its second reading Tuesday night, is intended to stop the sale of animals that come from puppy mills and unethical breeders.

Community member and Representative of House District 17 JoAnn Dayton spoke in favor of the ordinance by describing the life of puppy mill dogs. She explained that many puppy mills are not licensed or inspected, and they can breed anywhere from ten to 1,000 dogs at once.

“Puppy mills are big business,” Dayton said. “To maximize profits, the female dogs are bred at every opportunity with little to no recovery time between litters. When they are physically depleted to the point where they can no longer reproduce, the females are sold off or killed.”

She explained that several female dogs, as well as puppies with obvious genetic and health problems, are unlikely to make it out of puppy mills alive.

Dayton said the mills are overcrowded, unsanitary, and the dogs do not receive proper veterinarian care, food, water, exercise, or socialization.


Passing the Ordinance Would be a “Step in the Right Direction”

Dayton was accompanied by her four-year-old dog Beau, who was rescued from a puppy mill.

“He was fortunate to be rescued, but many are not. Passing the proposed ordinance before you is a step in the right direction. Puppy mills are cruel, and I believe all dogs deserve a good life, so please pass the ordinance,” Dayton said.

The board president of Red Desert Humane Society Melinda Baas also spoke in favor of the ordinance.

“This ordinance shows the spirit of Rock Springs, as we’re a community that not only cares about its citizens, but cares about the animals that are important to those citizens,” Baas said.

She explained that the life of puppy mill dogs “spills over into a community” when they are brought into the town. She said the animals that come from unethical breeders have all sorts of behavioral, health, and genetic problems.

“If that owner isn’t able to handle it, then it becomes animal control and the city that has to bear the responsibility for more animals than they can house, and that’s not a fair thing to make a city take responsibility for an owner’s choice,” Baas said.


Ethical Breeders Would “Suffer the Most”

Councilor Jason Armstrong said that if this was an ordinance that addressed outlawing puppy mills in Rock Springs, then he would support it.

“However, the ordinance in front of us is an ordinance that would regulate commerce in the city, and it paints a picture of good guys and bad guys,” Armstrong said.

He explained that the bad guys are the puppy mills and unethical breeders, and the good guys are the non-profit organizations and rescue shelters.

“And no doubt those labels do apply,” Armstrong said. “But there is a third party in here that’s not being addressed, and they’re the party that would suffer the most. That’s the group of people that are raising animals in an ethical manner and providing them to the pet shop.”

Councilor Tim Savage argued that there aren’t any ethical breeders that sell animals to pet stores.

“They go through, they broker, they have to be large-scale,” Savage said.


Ordinance is Not Intended to Stop Reputable Breeders from Breeding Animals

Mayor Carl R. Demshar Jr. said he didn’t think this ordinance would raise as much controversy as it has.

He was surprised by the number of ethical breeders who came out against the ordinance.

“The intent of this ordinance was not, and I can’t say this enough, was not intended to short circuit or circumvent the breeding of animals by reputable breeders,” Demshar said.


Decision May “Boil Down to Personal Philosophy”

Mayor Demshar said that in his eyes, the ordinance is oriented toward puppy mills. He said that his belief in this ordinance was soilidified when Rock Springs Animal Control Supervisor Mike Kiggins spoke in front of the council at the last meeting.

“He (Kiggins) knew what was going on at one of the local pet stores, but didn’t have the statutory authority, if you will, to circumvent or stop them,” Demshar said.

Demshar believes that when the council votes on the ordinance in two weeks, “it could boil down to personal philosophy”. 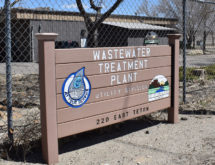 Green River Might Approve Sampling of Wastewater for COVID-19 Virus 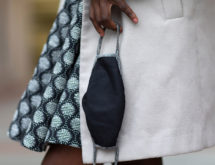 Face Coverings Could be Required Within County Buildings 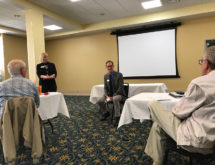