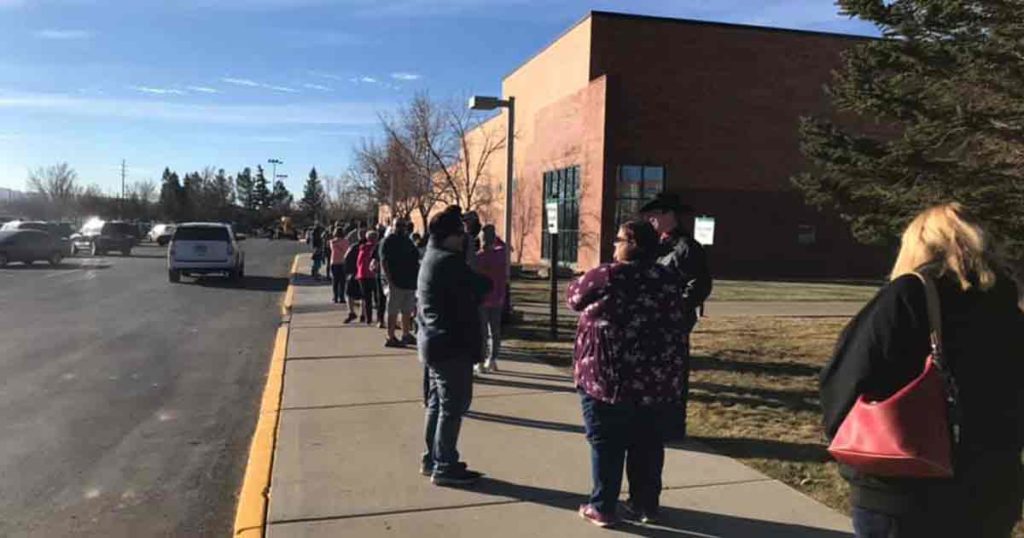 This was one of the lines at Western Wyoming Community College yesterday for the 2020 General Election. SweetwaterNOW photo by Stephanie Thompson

SWEETWATER COUNTY — With reported waiting times from voters of anywhere from 1 1/2 to 5 hours at some Sweetwater County polling locations during yesterday’s General Election, many voters were left angry and wondering why.

“It was a large combination of things that came together and made the perfect storm,” Lane said.

However, regardless of the circumstances that created the long lines, Lane said she isn’t placing the blame anywhere.

“I’m not going to blame anything because in the end I am responsible,” Lane said.

One issue Lane said caused the long lines not only at the Sweetwater Events Complex, but specifically at Western Wyoming Community College, were how many polling places were consolidated. For the Primary Election, the Sweetwater County Clerks Office had to reduce the number of polls because to state directives due to the COVID-19 Coronavirus pandemic. Those directives were later lifted.

Lane said she wanted to keep the polling places the same after the Primary Election because people were familiar with their new polling location and they had enough election judges to handle the General Election.

However, outlying area polling locations were added for the General Election, including Granger, Washam, Superior, Farson, Wamsutter, McKinnon, and Bairoil.

Residents reacted to our question on how long they had to wait in line to vote at this year’s General Election. To read all of those comments click below.

Lane said another area that slowed down the election process yesterday was switching from e-poll books, which are electronic, to paper books. She said the e-polling books were not working correctly, so they switched to paper books, which is slower and requires two judges instead of one.

Another reason for the slow lines, was the amount of people who were not already registered to vote.

“We had large, large numbers of people who weren’t registered that came out to vote,” Lane said.

Lane said this is a good problem to have, but it does slow down the process. It takes time to fill out paperwork, have the election judge review it, and then later enter the new voter’s name and information into the paper book.

Today, Lane and her team are reviewing all of the election information to see just how many new voters registered at the polls. She believed it would be thousands.

Without official numbers, Lane estimated to the media on election night that between 6,000 and 8,000 new voters were registered at the polls on Nov. 4 in Sweetwater County.

Judges have to sign an oath and be trained to complete the election work. Election judges are paid $180 a day, while election chiefs are paid $210 a day.

“I feel terrible people had to wait in line,” Lane said. “I could have done better.”

“I’ve learned a lot,” Lane said. “It will be different next time. We will take this as an opportunity to move forward and make some changes.”

Lane is already starting to come up with ways to improve the voting process for the next General Election.

As for the e-polling books, those will be in working order so they can eliminate the need for paper books, which would free up one judge.

Lane said she also wants to do a better job at educating residents on how to keep their voter registration active. A lot of residents thought that because they voted in the 2016 General Election, they were still registered, but in Wyoming in order to remain a registered voter, the voter must vote in every General Election, which happens every two years. This would help cut down on those who were in line who believed they were still registered voters, when they were not.

As for the when the official 2020 General Election results will be in, residents can expect to see them sometime Friday. You can see the unofficial results here.

Lane said they are in the process of reviewing all of the election results, which will then be submitted to the canvas board for review. Once the board has reviewed and approved the results, the official numbers will be released, including the final number of voters, how many new registered voters participated in the the election, and how absentee ballots were submitted.