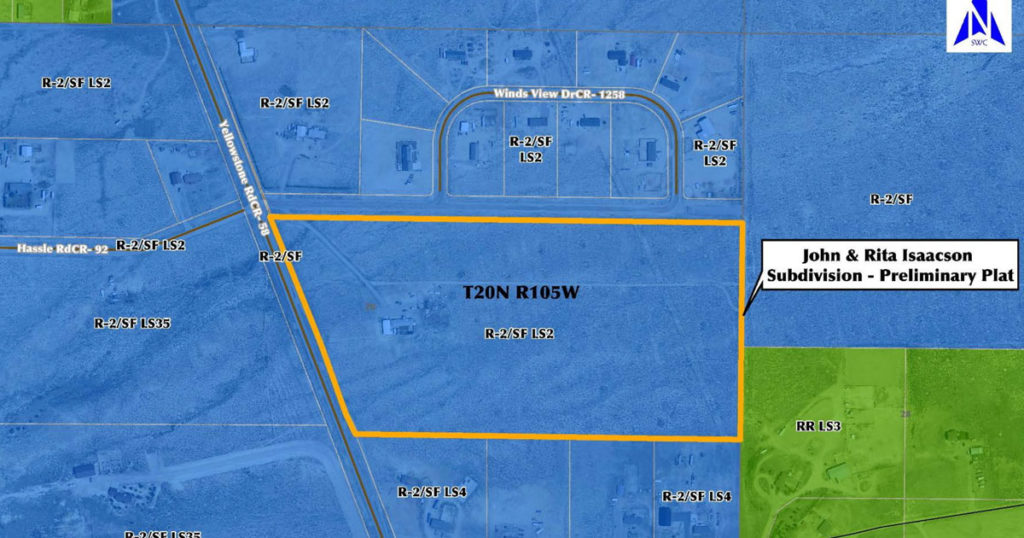 SWEETWATER COUNTY — The Sweetwater County Commission voted unanimously this morning to affirm a decision by the Planning & Zoning Commission regarding an access road for a subdivision south of Double J Road.

The John and Rita Isaacson Subdivision is a proposed subdivision just south of Double J Road. The Isaacson’s are planning to build 12 lots on the 37.26 acres on land they own. The parcel is zoned R-2/SF (Single Family Residential) with Minimum Lot Size Overlay of two acres.

The Isaacson’s bought the property 21 years ago and built a road to have access to their property from Yellowstone Road. However, due to the safety concerns, the Planning & Zoning Commission approved the subdivision proposal only with the stipulation that the current access be removed once the subdivision is completed.

Instead, the access point would come off Double J Road onto the proposed Appaloosa Drive.

Eric Bingham, Sweetwater County Land Use Director, said that the current access road is a fairly sudden right off of Yellowstone Road. Additionally, people driving on Yellowstone Road can be traveling up to 65 miles per hour. This situation creates safety concerns in the area.

R. Isaacson spoke at the Commissioner meeting in defense of her road. When they built their current access road, it was in accordance with the County’s Growth Management Plan (GMP) and zoning regulations because it wasn’t a subdivision yet.

Now that the land is being developed, the current road must be closed and there must be a new road to adhere to the GMP. The GMP has been in effect since 1997.

R. Isaacson said that building a new road would be upwards of $10,000.

“We feel like having to put a new road in there will cause us undue hardship financially and for our current living conditions,” R. Isaacson said. “We’ve used this road for 21 years, we have put a lot of money in to keep this a good road.”

She said that the wind out north of Rock Springs is really bad and their current access roads sits in a place where the wind doesn’t seem to be as much of an issue as it is elsewhere in the area.

She added that emergency vehicles may have a difficult time finding their address if they can’t access the property from Yellowstone Road because their address is on Yellowstone. However, Bingham later said that the lots out there would be readdressed according to the new access road.

Commissioner Island Richards said that he was going to vote to affirm the Planning & Zoning Commission’s decision, though he understood the financial implications for the Isaacsons.

“I hate to do it but I’m going to vote aye on this. It is no small task to do a subdivision. It’s a big project but with that comes becoming compliant with current zoning regulations. I know it’s expensive, that’s part of doing a subdivision,” Richards said.

There’s a reason those rules are there and it’s not just for your access, it’s the safety of the entire community.

Commissioner Robb Slaughter also said he would be voting to affirm the Planning & Zoning Commission.

“It’s very difficult for me to vote in favor of this because I do see what the financial burden can be to you in doing this, but the fact that we have the Growth Management Plan in place, it’s been there as long as it has, and we’re receiving the recommendation from the P&Z commission on this, I believe this is what’s in the best interest,” Slaughter said.

The Commission started off its meeting by unanimously electing Commissioner Keaton West as the board chairman.

West expressed his gratitude but emphasized that the Commission will need to work as a team of all five commissioners to best serve the county.

“I look forward to the five of us working as a team,” he said.

The Commission also had a discussion about whether or not the county should continue to pay to have the county numbers in the phone book. Tim Knight, IT Director, said that the amount has gone up every year, and it may go up to $2,500 next year.

There are somewhere around 10 numbers listed. Commissioner Lauren Schoenfeld asked if Knight could get them information on how many phone books are distributed each year to better determine how many people may be using it. Chairman West pointed out that many people are probably not using the phone book, however there are demographics who do.

They plan to get feedback from the community and readdress this issue in one of the next two meetings.

The Commission also voted unanimously to designate the Green River Star as the County’s Newspaper of Record for 2023.