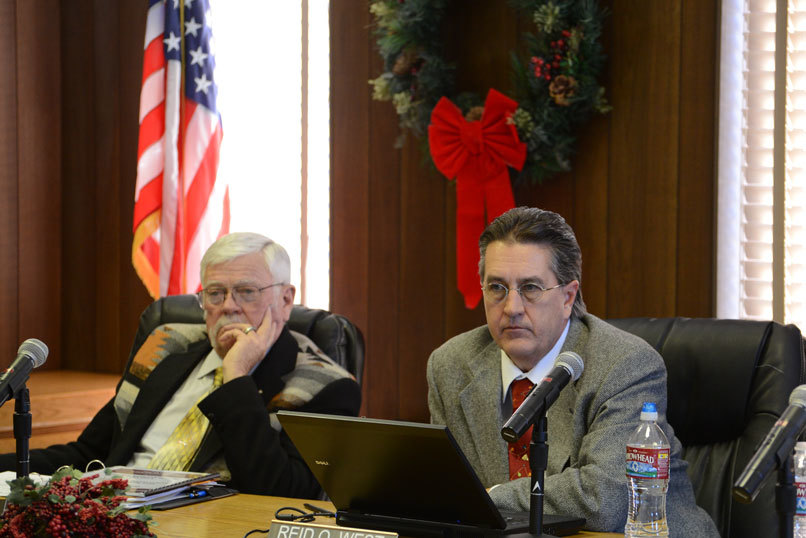 The Sweetwater County Commissioners voted to financially support the Castle Rock Hospital District while in transition.

GREEN RIVER – For the second time in the past few months, board members and administrators from Castle Rock approached the Sweetwater County Commissioners for financial support. Not only did the commission unanimously vote to give the district $965,000 this time, but the commission also heard from Mission Health Services which is in the process of taking over the Castle Rock Villa and Convalescent services.

Castle Rock Chief Executive Officer Bailey Docktor explained they need $450,000 by the end of January to keep the district from defaulting. This money would fund operations until June. She also explained the additional $515,000 was needed to cover benefit obligations to employees. The 101 employees currently working at the nursing home will each receive a severance payment along with built up sick leave and vacation days.

Commissioner John Kolb questioned these benefits. While Castle Rock legal counsel George Lemich felt they were individual personnel matters and needed to be discussed in executive session, Chairman Wally Johnson said the matter was not individual but general in nature and should be discussed in public.

Castle Rock representatives explained $226,000 would cover employees who have built up sick leave and vacation pay while $259,000 was severance pay in line with the policies spelled out in Castle Rock policy. This averages about $5,000 for each employee at the nursing home who would be affected by the sale.

Kolb wasn’t the only commissioner who had a problem with the benefit pay; Gary Bailiff also voiced concerns.

“These employees will go to bed Castle Rock employees one night and wake up to be employees of someone else,” Bailiff said. “They aren’t going anywhere. If they were leaving I would completely understand, but they are not.”

Kolb said providing top level care to seniors was very high on his list and a top priority for him. He said one thing that has bothered him was the way the state handles districts like Castle Rock. Kolb said they do not audit these districts and many times what is happening to Castle Rock also happens to other districts. Kolb said he is going to do everything he can to get this practice changed by lobbying at the state legislature.

Commission Don VanMatre said he has had to refuse help to struggling organizations because the commissioners have to balance a budget using revenue, and because they cannot spend money they do not have. VanMatre said that while he agrees with conserving taxpayer resources, they cannot turn their backs on this issue. He called the situation a tragedy and he views this problem as a crisis.

“We have 17 districts, five of which are going to come here sooner or later,” VanMatre said.

VanMatre told of the quality care his uncle received at the Castle Rock Nursing Center and said they will have to go through the commissioners own reserves but voiced support for providing the financial assistance. VanMatre and Kolb also asked why the city of Green River was not involved. Kolb even questioned where Green River Mayor Hank Castillon was during the day’s discussions.

Chairman Johnson said they had $5 million in cash carryover after balancing the budget, so there is money to fund this.

“Sometimes this job is difficult, and it gets that way when you think with your heart and not your head,” Johnson said. “Sometimes you’re in a position when those who can make a difference should.”

After a motion to fund the request was made, Kolb proposed an amendment to take out the benefits. His amendment died for lack of a second. In the final vote to support Castle Rock with the $965,000, all five commissioners voted to fund the district.

The Castle Rock Convalescent Center and Villa was started in 1987. Castle Rock Board Member Bob Nelson and Docktor explained the significant problems are with Medicaid and Medicare reimbursements, and the state does not foresee any increases or changes in the near future to the way they are made.

Kelso said they have several facilities in Utah and Iowa. He said they recently worked on a similar situation in Box Elder County and four other counties in Utah, again with similar problems.

“We have a pretty good idea of strategies that work,” Kelso said.

He also said they have the ability to absorb rising costs. Also, they are able to save money through a purchasing program which allows them to get supplies at cheap rates.

Not only can they operate at a lower cost, Kelso said they will do what they can to make sure the center is well staffed with quality benefits.

“We are confident we can step in and make this viable,” Kelso said.

The sale is waiting for the change to the lease agreement to go through. Kelso said that, although they will not be under the current Castle Rock Board, they have already spoken to the Castle Rock administration about working closely together for the best interest of residents.

As soon as the lease is approved, there are some state and federal licensing processes which will also need to be completed. Kelso said the federal process is the most lengthy. When asked how long it would take if it all went through quickly, the best guess was 90 days although there was doubt it would be finished in that amount of time.