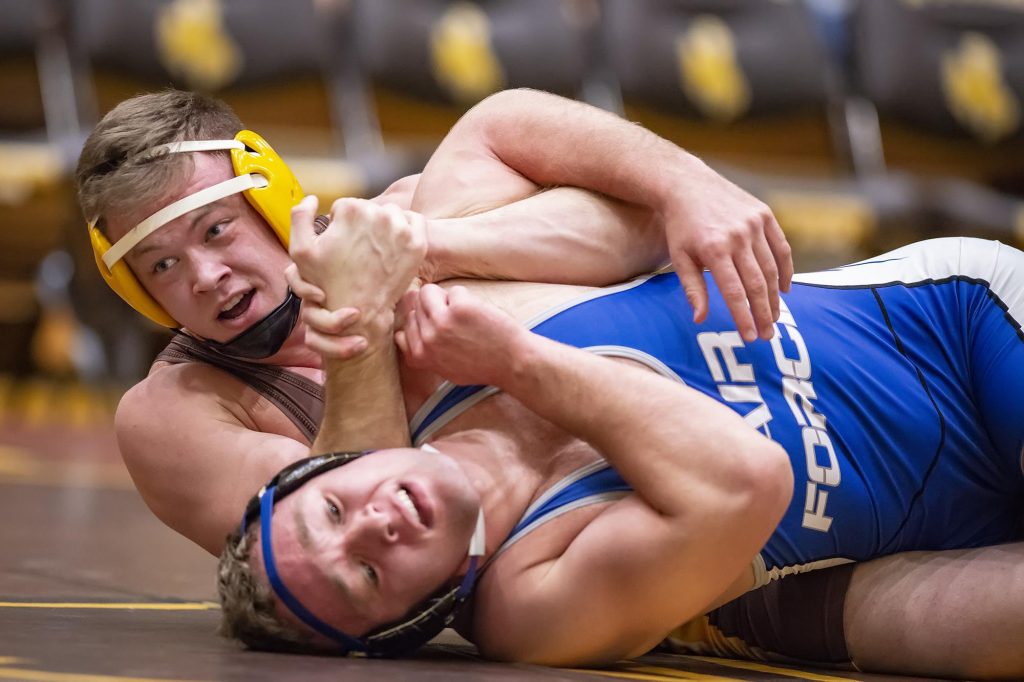 “I saw a lot of those matchups that could be tight,” head coach Mark Branch said. “Consistently, they came out and wrestled well. I think it’s gratifying to see those things you focused on during the week come into play. We saw some stuff on top we’ve been doing. We’ve really focused on quicker finishes… Those are habits that you want to see kick in.”

The teams got off to a late start, with weather delaying Air Force’s arrival and pushing the dual back over an hour beyond the originally scheduled start time; however, the Cowboys showed toughness in jumping on the Falcons from the start and not letting up. The Pokes won nine out of 10 bouts, with four of their victories coming with bonus points.

“It was a dominant performance,” Branch said. “And you start to wonder because our guys were pretty irritable waiting on Air Force to get here being down to wait by 5:30 when we didn’t end up weighing in until 7:10. You get irritated pretty quick when you thought you were going to be able to eat an hour ago. We just wanted to keep them calm and keep them focused. Everything was kind of thrown out of wack, so I was happy that they responded well.”

The dual opened at 157 pounds, where Dewey Krueger matched up with Air Force’s Alex Mossing. Krueger rebounded from an early Mossing takedown in the first 30 seconds of the match and a 2-1 deficit heading into the second period. Krueger outscored Mossing, 3-0, in the second, escaping from bottom within a few seconds before notching the go-ahead takedown with 35 seconds to go in the frame. With Mossing electing to start the final period in neutral, the Cowboy was able to fend off a handful of attacks for the 4-2 win.

Senior Branson Ashworth stayed hot at 165 pounds, winning his 10th bout in a row and recording his seventh-straight bonus point match. Ashworth closed out Falcon Marcus Amico before the end of the second period, racking up three takedowns and three nearfalls on the way to an 18-2 tech. In his seven-match bonus point streak, the Cowboy has compiled three pins, two technical falls and two major decisions.

At 174, redshirt freshman Hayden Hastings rebounded from a Cody Surratt takedown in the first five seconds of the bout to score a takedown of his own and lead, 3-2, heading to the second. From that point it was all Hastings, who strung together four takedowns and nearly three minutes of riding time en route to a 15-6 major decision.

Freshman Tate Samuelson remained perfect in his dual career, using a late takedown in the third to lock up a 4-0 decision over Air Force’s Jake Thompson in the 184-pound match. With the win, Samuelson pushed his record to 4-0 in duals.

Cale Davidson was able to pick up his second bonus-point win in the last three matches with a quick, 16-0, technical fall over Casey Jumps. Davidson notched takedowns in the first and second period, following both up with back points on the way to the shutout in just over four minutes. It marked the first tech of Davidson’s rookie season.

Heavyweight Brian Andrews extended the Wyoming lead to 23-0 in a 6-1 handling of Kayne Hutchison. With a first-period takedown and an escape to open the second, Andrews led, 3-0, heading to the final frame. The Cowboy was able to run up the riding time to open the third, before releasing Hutchison and taking him right back down for the score.

With the dual coming back around to the top of the Cowboy lineup at 125 pounds, Cole Verner recorded seven-straight points in his bout to avenge his Cowboy Open loss to Sidney Flores in a 7-2 win. Flores scored on a danger call in the first period, riding Verner out into the second. With Flores choosing down in the second, Verner tied the match back up at two with a two-point nearfall and full-period ride. Choosing neutral, Verner recorded a takedown with 21 seconds to go in the bout and took Flores to his back for another couple of nearfall points.

At 133, Montorie Bridges used a flurry of points in the third period to secure a 14-5 major decision over Tony DeCesare. Leading, 4-2, heading into the final frame, Bridges scored a reversal and three takedowns in the last two minutes to push the Pokes to a 30-0 lead. It marked the sixth major of the season for Bridges, who moved to 21-7 on the year.

After the Falcons got on the board with a 4-1 win over Cowboy Andrew Gomez at 141 pounds, Wyoming finished strong with a Jaron Jensen win over Tommy Stager. Jensen racked up takedowns in the first and second periods, before recording two in the third to pick up the 10-3 decision. It marked his fourth-straight win.

The Cowboys will wrap up their January homestand next Sunday, Jan. 27, when they host West Virginia in the UniWyo Sports Complex.