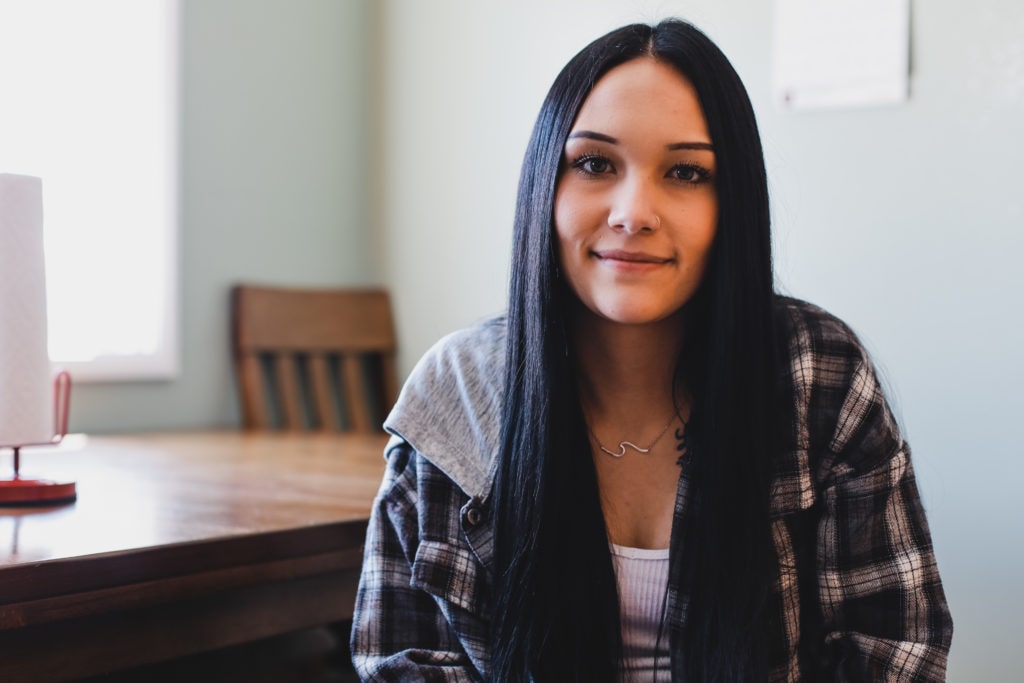 On November 21, 2018, the then 17-year-old’s life changed dramatically after a single car rollover left her paralyzed the day before Thanksgiving.

Kaitlin, who had recently found out she was pregnant and dropped out of high school, was traveling with her boyfriend at the time to visit her family in Utah for the holiday. There was excitement prior to the trip to spend some time with her family which she hadn’t done for quite some time.

As the two approached Lyman, an intense argument sparked a sudden jerk of the wheel by Kaitlin who was driving. What she explains as being a rollercoaster, the vehicle flipped multiple times, ejecting her out of the sunroof of the car.

Laying in the freshly stirred up dirt, her boyfriend tried finding her in the heap of crushed metal. Kaitlin suffered a punctured lung, broke several ribs, fractured her neck, dislocated her hip, had a giant gash in her head, and had broken her back leaving her helplessly paralyzed.

To their luck, a truck driver behind them happened to be a trained EMT. He had a neck brace and some other emergency supplies that helped stabilize Kaitlin until first responders could arrive.

From that point, it’s a blur between a life flight to Utah and waking up in a hospital bed. At one point, Kaitlin said her vitals were lost on the flight around Park City, Utah and they had no matching blood for a blood transfusion.

“I remember looking out the window on the helicopter and everything was bright, but it was nighttime. I don’t know what I was seeing,” Kaitlin said. “I remember the nurses crying and I was grabbing for anyone’s hand I could find just because I thought it was the last time.”

Because Kailtin was a minor, the hospital couldn’t put her into surgery without her father’s consent. Everyone’s hands were tied with her life on the line.

I was basically just laying there dying because they couldn’t put me into surgery.

Eventually her father arrived and she was able to hang on long enough for a surgery to be performed.

Over the next few days, Kaitlin was happy. Happy to be alive and happy enough to sing in her hospital bed. The fact that both her and her unborn child had survived the accident was nothing short of a miracle.

But another miracle was needed when she found out she would never walk again. At first, she couldn’t really process the idea of never being able to use her lower half. Over the next three months in therapy, she relearned how to live her life.

“I don’t think it hit me at first that I was never going to walk again. I thought it was more of a temporary situation,” Kaitlin said.

From getting dressed to using the bathroom, it was a whole new world and experience.

“It was hard to process that,” Kaitlin said. “I felt super defeated having to relearn everything that I had been doing my whole life already.”

The happy songs soon turned to tears and frustration. Reality had set in and the burden of a new way of life was too much to handle.

Kaitlin says the only thing that helped her get through those dark days was the fact that she had a baby inside of her.

“I just wanted to do it all for her,” Kaitlin said.

That same selfless mindset to take care of her daughter has not only helped her relearn a new way of life, but it also helped motivate her to go back to high school and graduate.

Over the last two years, Kaitlin has worked hard to graduate — something she didn’t find valuable before her accident. In just a few weeks, she will collect her diploma, which she’s proud to soon accomplish thanks to the encouragement of her father.

“I wanted to go back, get a job so that I can provide for her (daughter). It was not easy, but I’ve had a lot of help from my mom and dad,” Kaitlin said.

Doing hard things has become a part of her identity and next year, Kaitlin hopes to take another big step and move out on her own and get a job.

If you ask her friends, they would describe Kaitlin as a very positive person who has inspired them. For someone who has had so much adversity at such a young age, she says she has learned through this entire life-changing experience that there’s a lot to be grateful for.

“In rehab I saw a lot of people that were a lot worse off than me with brain injuries and people who were paralyzed from the neck down. I’m just grateful for what I do have,” Kaitlin said.

With her daughter by her side, anything is possible for the two who have fought through some of the toughest challenges.