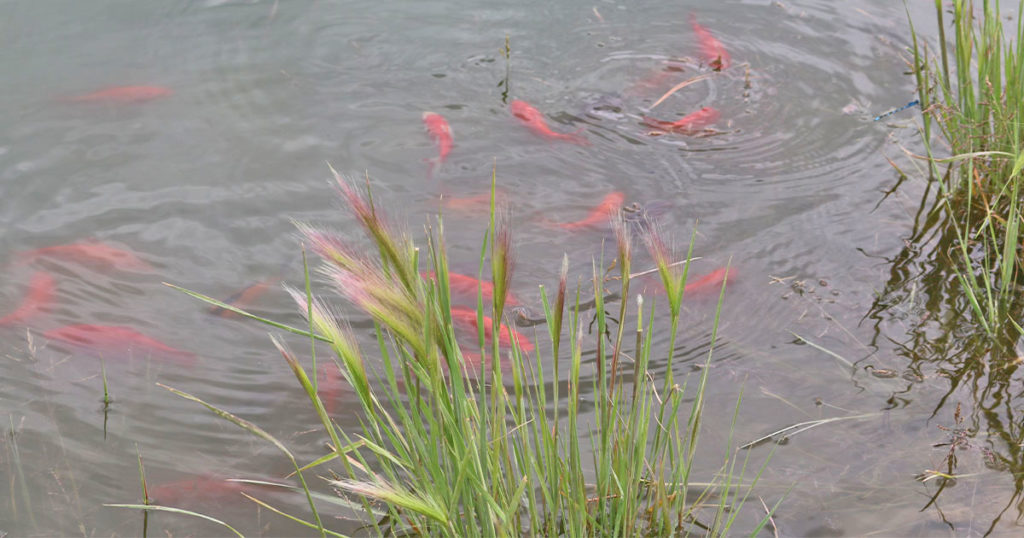 Wyoming Game and Fish employees are estimating that there are hundreds of goldfish in the Bitter Creek Bark Park pond. SweetwaterNOW photo by Stephanie Thompson

ROCK SPRINGS — The Bitter Creek Bark Park Pond will be closed for up to eight weeks starting in mid-September so the pond can be chemically treated to eradicate the goldfish living in it.

During a public meeting Thursday evening, Wyoming Game and Fish Regional Fisheries Biologist Jessica Lockwood spoke to a handful of residents on how the department was going to remove the goldfish from the dog park pond. The Dog Park is located at 850 Center Street and is less than 100 yards from Bitter Creek.

“So the reason why the department wants to chemically treat the dog park pond is because last year they received a report from a concerned citizen that there were goldfish in the pond and those goldfish aren’t supposed to be there and they were illegally introduced,” Lockwood said.

While most of the goldfish are around 4 to 5 inches, some are around 8 inches or larger, according to City of Rock Springs Park Superintendent Mark Lyon. However, he has noticed there didn’t appear to be as many goldfish in the pond this year when compared to last year.

“We saw multiple size classes of goldfish that we collected as well as different colored goldfish. These different colorations occur when you have a reproducing population of goldfish,” Lockwood said. “They have been there for a while.”

A goldfish can lay up to 40,000 eggs and can grow to large sizes rapidly. They also can crossbreed with carp and have the potential to spread diseases because there are more than 113 parasite species that can infect goldfish, she explained.

“So if you do transplant goldfish to a new water body, you’re more than likely transporting parasites along with it,” she said.

Lockwood said they are concerned about goldfish being released into the pond because goldfish are bottom feeders which can adversely impact water quality. They are also concerned about residents just dumping them out of their aquariums into the pond because they could inadvertently contaminate the pond with zebra mussels, which have been discovered in moss balls residents commonly place in aquariums to absorb harmful nutrients in the water and limit the growth of algae.

“Once zebra mussels get established, they are near impossible to eradicate,” she said.

However, goldfish may not be the only fish in the pond. According to Lockwood, in the fall a resident reported seeing a catfish carcass laying next to the pond.

“The pond is 6-feet deep and you can’t see all the way down to the bottom, so there is a potential for other things to be in there that we don’t know about,” Lockwood said.

When there is an unwanted species they want to remove from a body of water, the department has a couple of options. One of those options is to mechanically remove the species, however that is not only time consuming, but labor intensive. Lockwood said this procedure probably wouldn’t rid the pond of all the goldfish.

The second option to eradicate the species would be to use a chemical called Rotenone, which would be more effective, she said. Rotenone is a naturally occurring complex ketone, derived from the roots of Lonchocarpus species, such as tropical peas and beans. It’s commonly used to eradicate fish, she said.

“How it works is it interferes with cellular respiration, which effects gill-breathing animals,” Lockwood explained. “When they come in contact with the chemical, they are no longer able to extract oxygen from the water.”

Because of the way this chemical works it does not impact humans, birds, mammals, reptiles, amphibians, or anything that doesn’t have gills.

Rotenone has been used for centuries by humans to harvest fish for consumption and to manipulate fish communities, she said. It’s also been used as an eradication tool in fisheries management since the 1930s.

When applying the chemical Rotenone, precautions are taken. The treatment area will be closed to the public during the application process and those using the chemical will be wearing personal protective gear. However once the chemical is mixed thoroughly, it would take a lot of exposure for someone to get sick.

“A 160 pound person would have to consume 47,000 gallons of treated water in order to obtain a lethal dose,” Lockwood said. “To put that into perspective, the average person only drinks about a half a gallon of water a day and only 182 gallons of water for an entire year.”

She said so far there are no known cases of contaminated ground water from the use of Rotenone during chemical treatments.

As for the timeline, the are looking at treating the pond during the second half of September. Rotenone is best when used during a certain temperature, so they are trying to plan to treat the pond when the high usage is starting to taper off, such as in the fall.

Prior to treatment, the pond will be partially drained so an inflow pipe will no long be in the water. They want to make sure fish aren’t able to escape by using that pipe.

While the east side of the park will remain open to the public, the west side of the park will be closed for 24 hours and the pond itself will be closed for up to 8 weeks. The pond will be fenced off to prevent humans and animals from accessing it. They will then collect the dead fish and properly dispose of them. Placard signs notifying residents of the closure will be placed at the park.

Unfortunately, this isn’t the only pond where goldfish have been reported. The Game and Fish Department is looking into reports of goldfish in the Wataha Fishing Pond out near the White Mountain Golf Course and the Foothill Wetlands Park on Foothill Boulevard.

Lockwood said they want to remind residents not to dump any fish, turtles or other pets into local ponds. She said they also shouldn’t flush them down the toilet or put them in rivers or lakes.