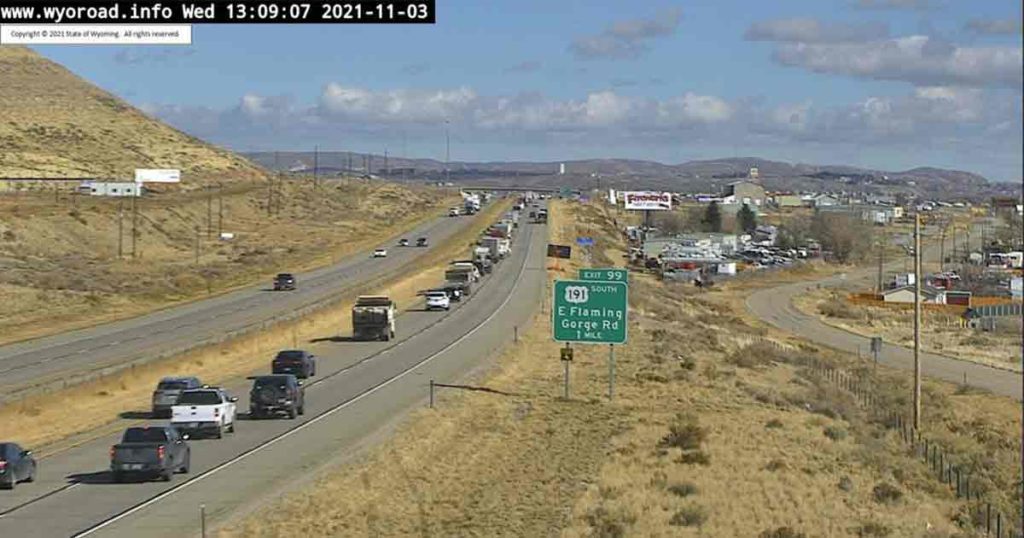 Traffic was backed up on Interstate 80 yesterday afternoon after a high speed chase took place. The chase ended in a crash near I80 Exit 99. WYDOT Webcam photo

ROCK SPRINGS — The driver involved in a high-speed chase between Green River and Rock Springs died after injuries sustained in a crash, according to the Wyoming Highway Patrol (WHP).

On November 3, troopers conducted a traffic stop on a 2021 Chrysler Van at milepost 80 on Interstate 80 near Green River for a traffic infraction. A backup trooper in the area arrived to assist with the traffic stop. The driver attempted to jump back into the Chrysler and drive away after conversing with the troopers for a short time. Troopers tried to stop the driver from leaving, but were unsuccessful, the release states.

Troopers pursued the vehicle as the driver fled east on Interstate 80 towards Rock Springs.  The pursuit reached speeds over 120 mph. Law enforcement successfully deployed spike strips around milepost 97 on Interstate 80 to deflate the vehicle’s tires, according to the press release. The driver continued to evade troopers as he fled on Interstate 80. The vehicle collided with the back of a belly dump combination commercial vehicle at a high rate of speed after exiting the interstate at Exit 99.

The driver of the pursued vehicle was pronounced deceased from injuries sustained in the crash.  Located inside the vehicle was approximately 83 pounds of suspected marijuana, the release states.

The driver of the commercial vehicle was not injured in the crash.

The identification of the deceased driver is being withheld pending next of kin notification.

The investigation is still ongoing, and more information will be released as it becomes available.