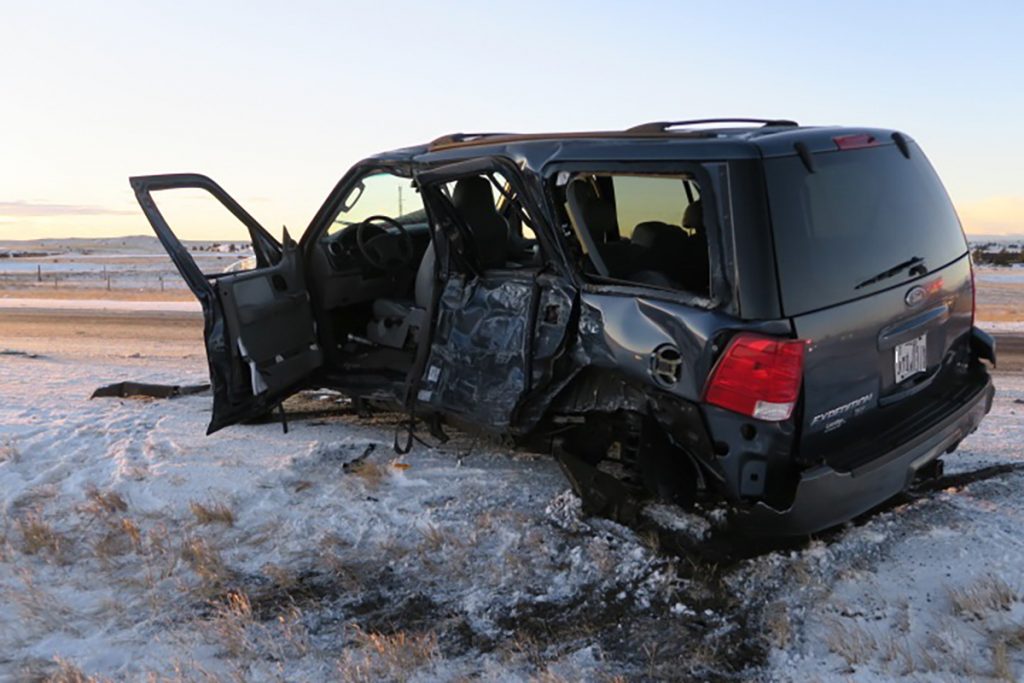 The driver of the 2004 Ford Expedition survived this accident thanks to the use of seat belts and air bag deployment.

Travelers in four separate vehicles avoided series injuries in a collision earlier this month thanks to the use of their seat belts, according to a report today from the Wyoming Highway Patrol.

The report states that around 6:40 a.m. on February 5th, Wyoming Highway Patrol troopers were dispatched to a collision involving four vehicles.  The collision took place around milepost 334 on Interstate 80.

A 2004 Ford Expedition was headed west on Interstate 80 when the driver lost control on the slick roadway.  The Expedition left the roadway and entered the median at an estimated speed of 65 mph.

Meanwhile, three full-sized pickup trucks were eastbound in the same area in the right-hand lane.  The Expedition exited the median and entered the eastbound lanes colliding head-on with a 2013 Chevrolet Silverado.  The Expedition continued west striking a 2015 GMC 2500 before coming to a stop in the median.

A driver of an eastbound 2017 Ford F-150 was unable to stop in time and collided with the GMC as it entered the ditch.

While most of the vehicles were either destroyed or severely damaged in the crash, the occupants walked away with minor injuries.  Seat belts and airbags played a large role in the survival of all occupants.

The roadways were slick with snow and ice from an early morning storm.  The variable speed limits were lowered due to the hazardous road conditions.  Speeding too fast for conditions is being investigated as contributing factors.

The WHP would like to remind motorists using a seat belt is the easiest step you can take to ensure a better chance of surviving a serious motor vehicle collision.

Seat belts can help prevent drivers and passengers from being ejected during a crash and have saved thousands of lives each year, the report states.