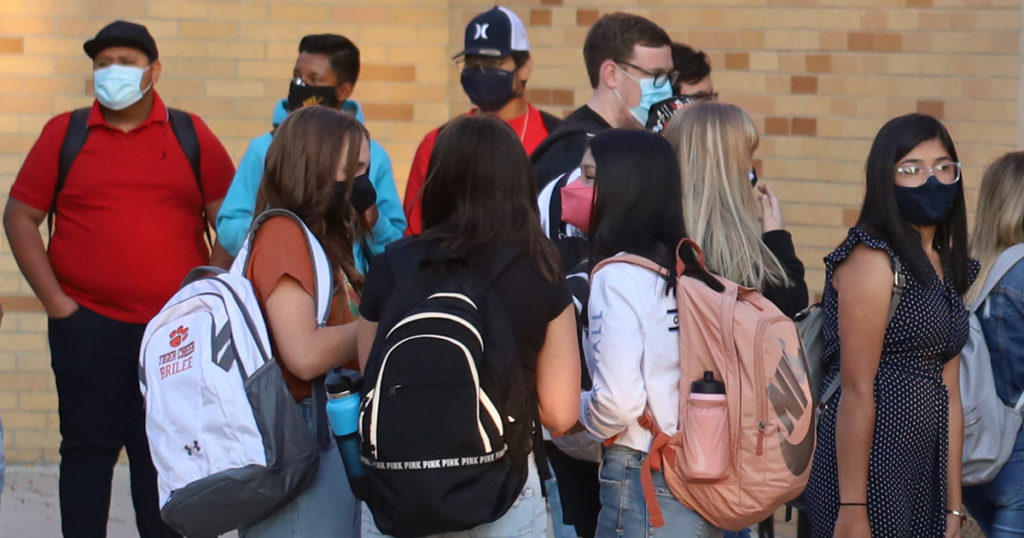 Educating students and keeping them and staff healthy during the first semester has created unique challenges for both Sweetwater County school districts.

Both Sweetwater County school districts have spent the last four months balancing the unusual task of educating students through a global pandemic that’s affected everyone in our communities.

It began last summer when officials from both districts faced the difficult challenge of getting their schools ready for three possible scenarios: in-person learning, virtual learning, or a hybrid of both.

Their main focus: keeping students and staff healthy, while preventing the spread of the COVID-19 coronavirus and managing to meet the required amount of instruction days mandated by the state.

SweetwaterNOW took a moment to speak with leaders from both districts as they prepared for their Christmas breaks. While more challenges lie ahead in the next semester, officials believe that the protocols put in place this summer have been effective in keeping the schools open.

With circumstances around COVID-19 ever-changing, Sweetwater County School District No. 2 (SCSD No. 2) is constantly examining their current and possible future situations.

“We have ‘what if’ discussions every week. What would force us to move to remote learning is if we cannot staff a building.”

Barringer added the district now has the ability that it didn’t have three months ago for kids to remote into their classrooms, for the most part.

“But if we can’t have an adult in that classroom teaching, then that’s going to be a big decision on the school’s part,” he said.

Substitute teachers have presented a challenge at times, as there are not always enough available. But Barringer said the district has been able to do some shuffling inside the buildings to make it work so far.

SCSD No. 2 has also picked up about four or five University of Wyoming students to be substitutes while they are on winter break through the end of January.

In addition to making sure schools are staffed, SCSD No. 2 School Nurse Michelle Cordova said they are monitoring how the spread of the virus is occurring.

Sweetwater County School District No. 1 (SCSD No. 1) Human Resource Director Nicole Bolton echoed that sentiment. She said SCSD No. 1 saw a relatively small number of positive cases until a “super-spreader” event occurred right after Halloween that “really hurt us.”

“The nurses, myself, we panicked a little bit because it was getting to a point that we weren’t sure we were even going to be able to keep some of the schools open because of the amount of staff,” Bolton said.

Getting students who chose in-person instruction to wear masks presented a new challenge. Not only are students required to wear masks the entire day while in classrooms, but they must also wear them properly by covering their noses and mouths.

Bolton said that after some initial debate from parents about their kids wearing masks, those protests have mostly stopped since several kids were quarantined and had to stay home for 14 days.

“And the kids that we’ve continually had problems with have been suspended,” Bolton said.

She said other than the one event after Halloween, positive cases have not overwhelmed SCSD No. 1, and “so far, we have yet to link a positive to the schools.”

“That doesn’t mean that they couldn’t have somehow. But we’re not getting any evidence that any spread is because of the schools,” Bolton said.

To take extra precautions, SCSD No. 1 Head Nurse Kim Keslar said the district is sending kids home who exhibit any type of illness, COVID-related or not.

“This year has been a little different because we have no way of ruling out if it’s COVID or whether it’s some random stomach bug or seasonal allergies,” Keslar said. “We know it can be frustrating for the parents, but it’s also saved quite a few kids from being quarantined.”

Barringer and Cordova also said that so far, the SCSD No. 2 quarantines are from community spread, not spread within the schools.

“When I look at our list, a lot of our quarantines are from the social gatherings outside of school.” Barringer.

Barringer added more quarantines have been recorded in the middle school and high school, simply because the older kids are more social outside of school than the elementary kids. Bolton said SCSD No. 1 is seeing the same thing.

Many quarantines are also from family members such as parents testing positive for the virus, which requires the family to quarantine.

“Those outside events and infections affect us in the school,” Cordova said.

Benefits of Being Proactive

When school went online in March this year, none of the teachers or students had time to prepare. To ensure everyone is ready in the case school does go back online, SCSD No. 2 has put a focus on being proactive.

Recently, the entire district participated in a Tier 3 practice day, in which students worked on their own with chromebooks while in the classroom.

Cordova said she believes this startled the community a bit, as it may have led some to believe they were preparing for a move to remote learning. However, the practice days were to ensure that if a move must be made, whether due to staffing, spread within schools, or county guidance, staff and students will all be equipped with the skills to continue learning efficiently.

“Last year we didn’t have that practice time. So now we have the benefit of being able to practice and prepare” Cordova said. “If we practice now before we need it, the kids will be ok with it, the teachers will be ok.”

Despite having more ability to conduct online learning and being more prepared, Barringer said there are still many challenges to remote learning. That is why the goal is to stay in the classroom.

In the event that school did move online, Barringer said the impact on the entire community would be difficult, as it would require many parents to figure out how to balance work while having kids at home all day. Another challenge would be limiting the amount of time children are sitting in front of a screen.

“We would go to a shortened school day because of the amount of screen time those kids would be putting in,” Barringer said.

Despite the enormous challenges of educating students during a pandemic, the leaders of both district’s say community cooperation has been vital to keeping kids on track.

“The families have been really amazing. For the most part, they have been really supportive. It can get frustrating, but they’ve been following through with testing because I think the end goal for everybody is to keep our schools open.”

Barringer said families in SCSD No. 2 “have done a pretty good job of keeping their kids home if there’s a question.”

Keslar said the attitude of her nurses needs to be commended. There are currently eight nurses working in SCSD No. 1 which presents a different challenge altogether. COVID has consumed so much of the nurses’ time that many are working up to 16-hour days to stay ahead of it.

“There aren’t very many of us and we’re in the middle of a pandemic, so on top of what we normally do, our tasks are definitely increasing,” Keslar said. “You’re sort of pulled in a lot of different directions, and I think that makes everybody feel like you just can’t quite do enough. It’s a hard balance.”

Heading into 2021, both school district communities are hoping for a return to some normalcy. Bolton said it’s “gut-wrenching” to hear some elementary school students say they’ve seen their teacher’s faces for the first time since school started.

“You don’t realize how much even just a mask and covering up one’s face has an emotional impact on the connection with the teacher and the student,” she said. “I’m hoping like everyone else heading into the new year to see it ease up.”

Kelsar said families can anticipate the health orders to remain in place until the end of the school year, “but it’s definitely going in the right direction.”