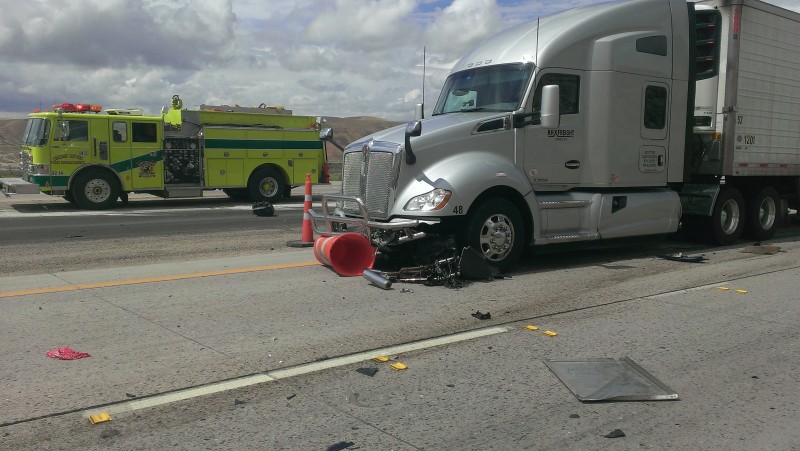 UPDATE — A fatal crash on August 3rd has resulted in the death of 64 year old Mr. Lynn C. Zingleman of South Jordan, Utah. The crash occurred at 11:40 a.m. on Interstate 80 at mile post 90 which is considered in the city limits of Green River, Wyoming.

Zingleman was eastbound in a construction zone crossover on I 80 operating a 1997 Triumph motorcycle.

Traffic was reduced to one lane of travel in the westbound tunnel at this construction zone.

The Triumph crossed into oncoming traffic and collided with the trailer of a westbound 2014 Freightliner tractor driven by 57 year old Robert Burch of Springdale, Washington.

The crash caused Zingleman to separate from the motorcycle. After the initial collision, the motorcycle only was then struck by a 2016 Kenworth driven by 45 year old Narinder Singh of Kingman, Arizona.

Zingleman was wearing a helmet but still sustained fatal injuries on scene.

The crash did cause a temporary closure of I 80 with traffic being diverted through the eastbound tunnel and the city of Green River during the investigation.

Mr. Zingleman marked the 85th highway fatality in Wyoming for 2015 compared to 83 fatalities in this same time period in 2014.

GREEN RIVER – Officials confirmed a male driving a motorcycle involved in a Monday accident on Interstate 80 has died.

According to Wyoming Department of Transportation Public Relation Specialist Stephanie Harsha, the man driving the motorcycle was traveling in the eastbound lane.

The man was approaching the construction zone on the eastside of the Green River tunnels where the Interstate changes to two lanes. The motorcycle went through the crossover and into the westbound lane striking the side of a semi truck.  Officials said he then fell back into the westbound lane where he was struck again by a second truck.

The accident is still under investigation by Wyoming Highway Patrol. The man’s name has yet to be released as officials are contacting his family.

Harsha said one lane of traffic has been opened on the eastbound side. The westbound lane is still closed as troopers continue to investigate the accident. Westbound traffic is being re-routed through Green River.

Watch SweetwaterNOW for more details as they become available.