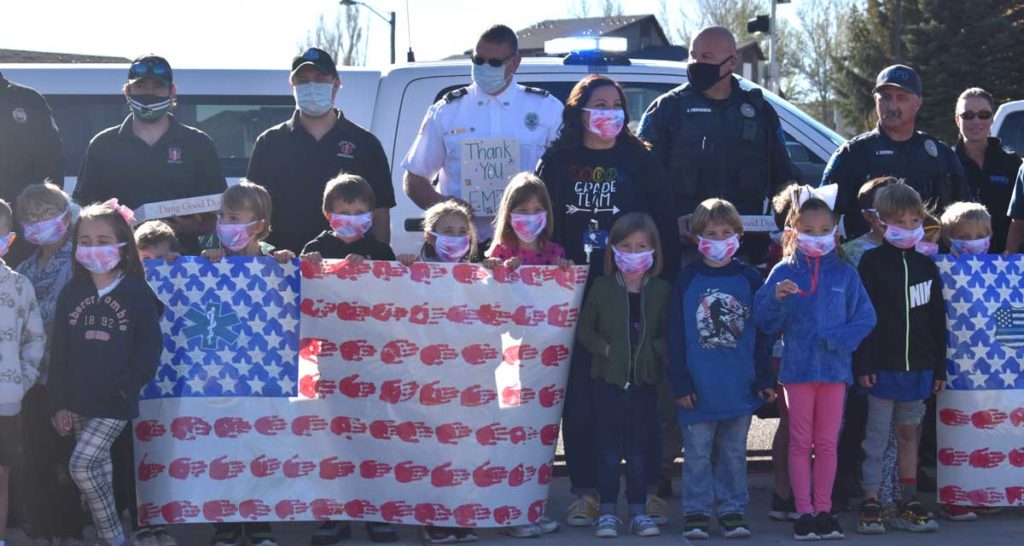 The Truman Elementary first graders gifted the Green River first responders with handmade flags and thank you cards to show their appreciation for all the work the first responders do for the community. SweetwaterNOW photos by Olivia Kennah

GREEN RIVER — The Truman Elementary School first grade classes took it upon themselves recently to make sure the Green River first responders know they are appreciated.

On Wednesday, the kids presented the Green River Fire Department, Green River Police Department, local EMTs, and mine rescue teams with special handmade United States flags to express their gratitude for all that the emergency responders do for the community.

The kids got the idea while they were being shown a flag that was made by in 2001 in response to the September 11 terrorist attacks. Theresa Freeman, a teacher who taught for over 40 years in Sweetwater County School District No. 2, had her class at Truman Elementary craft a flag to honor first responders after the 9/11 attacks occurred. The flag still hangs in Mrs. Freeman’s old classroom.

“Her class made one of these flags after it happened, and so we were showing the kids the flag and they wanted to do something special for you guys, so we all made a flag for you,” Truman Elementary first grade teacher Annie Steiss told the first responders.

The flags were constructed out of paper and the students’ handprints made up the red stripes on the flags. At the center of the stars was one of the badges for the respective emergency responder group.

The local first responders lined up outside the school and watched as the students brought out the flags. They then all participated in the Pledge of Allegiance before presenting the flags to each respective group of emergency responders.

“We just wanted to show our appreciation and thank you for all the hardwork you do, and the kids just had a blast making these for you,” Steiss said.

In addition to the flags, the kids also made thank you cards and gifted the first responders with donuts.

The students got really involved in the cause, one student even taking a dollar from his piggy bank to donate to the firefighters. The first responders all expressed their gratitude to the students and the Truman Elementary first grade teachers.

“It was all the kids,” first grade teacher Kristian Brownlee said.