(Rock Springs, WY) – The Memorial Hospital of Sweetwater County Foundation met for their regularly scheduled meeting on Thursday night, but this time the agenda included something a little different. After calling roll and going through some usual business, Al Harris, Memorial Hospital Foundation (MHF) Chairman, turned the meeting over to Fred von Ahrens and Dave Caplan from FMC.

Mr. von Ahrens, FMC’s Alkali Chemical Division (ACD) Manufacturing Director, discussed how he came to be on the MHF Board of Trustees and mentioned some of the projects that he’s seen done by the Foundation. He applauded the Foundation for the lives and patients that have been touched through the donations that have been brought into the organization. He also expressed his appreciation to Memorial Hospital of Sweetwater County for partnering with FMC on their annual Employee Health & Wellness fair and for engaging in the well-being of his staff. Then, with Dave Caplan, Site Communications and Public Affairs Manager, they presented the Memorial Hospital Foundation with a check for $25,000.

FMC believes that our mission as a community partner is to contribute to the quality of life here in Sweetwater County. I have seen personally the lives touched by the Foundation from the smallest gestures of patient assistance to the securing of grants that have brought in state-of-the-art equipment for the hospital. FMC wanted to show our support for the Foundation’s mission of advancing healthcare in this region and we encourage other local corporations to get involved.

In just the past few years the Memorial Hospital Foundation has had some major accomplishments, including donations from The Leona M. and Harry B. Helmsley Charitable Trust that established a new digital mammography suite in 2011 and then the purchase of a new linear accelerator, used to provide the radiation treatment in the new regional cancer center, in 2013. They also held their first Red Tie Gala in February where over $85,000 was raised to benefit the Cancer Fund that the Foundation has set up. Also announced at the meeting Thursday was the hiring of the new Executive Director, Tiffany Grosvenor, after the recent relocation of the former director.

This generous contribution from a corporate leader like FMC is a stamp of confidence for this Foundation. I speak for all of us when I extend my gratitude to the leadership and staff of FMC for believing in their local health community. In just a few years we have seen some great progress and we also have a lot to look forward to. Also, with the hiring of our new Director we will be able to open new doors with a new set of eyes.

Ms. Grosvenor moved to Rock Springs this year to be with her fiance after a remarkable few years at The Venetian Hotel & Casino in Las Vegas, NV where she moved up through their Marketing department and departed as the Assistant Manager of Slot Promotions and Events. Although she just moved to Rock Springs in July, she is no stranger to Sweetwater County, having played basketball at Western Wyoming Community College on a scholarship. She will start as the Executive Director of the Memorial Hospital Foundation on November 17th. 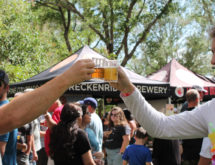