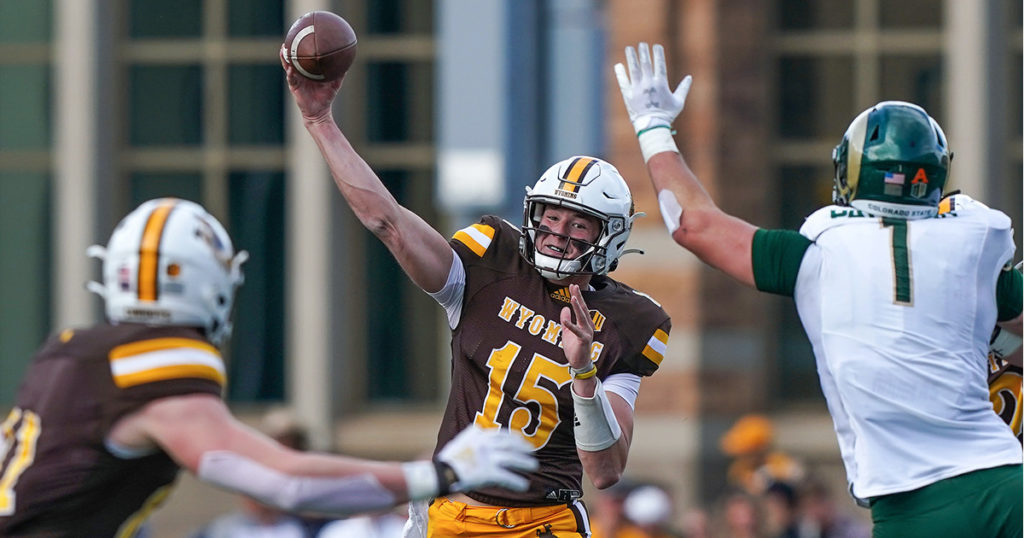 BOISE, Idaho — A Friday night meeting between the Wyoming Cowboys and Boise State Broncos will be the featured game to kick off this week’s action in the Mountain West Conference.

Both teams bring overall records of 5-4 into this week’s game, and both teams are coming off convincing wins in their last outings. Wyoming defeated Colorado State 31-17 last Saturday in Laramie, while Boise State traveled to Fresno State and beat the Bulldogs 40-14.

The Wyoming Cowboys and Boise State Broncos have played three common opponents thus far in 2021 — Air Force, Colorado State and Fresno State. Wyoming has a 1-2 record against those opponents, while Boise State is 2-1.

Cowboy quarterback Levi Williams and wide receiver Isaiah Neyor are developing an exciting connection for Wyoming’s passing attack, which they hope to continue to build on Friday.

Against Colorado State, Williams found Neyor on two touchdown passes of 25 and 15 yards. Williams ended the day 9 of 16 passing for 92 yards, two TD passes and no interceptions. He also rushed for 116 yards and one TD. Neyor caught three passes for 45 yards and two TDs.

Wyoming’s defense has been outstanding throughout this season and continues to rank among the best in the nation.

The Cowboys enter the matchup against the Broncos this week ranked No. 4 in the nation in pass defense, allowing opponents only 157.9 passing yards per game. The Pokes are also ranked No. 13 in the country in pass defense efficiency, with a rating of 114.03.

The game will be televised nationally on FS1 and will kick at 7 pm from Albertsons Stadium in Boise, Idaho.