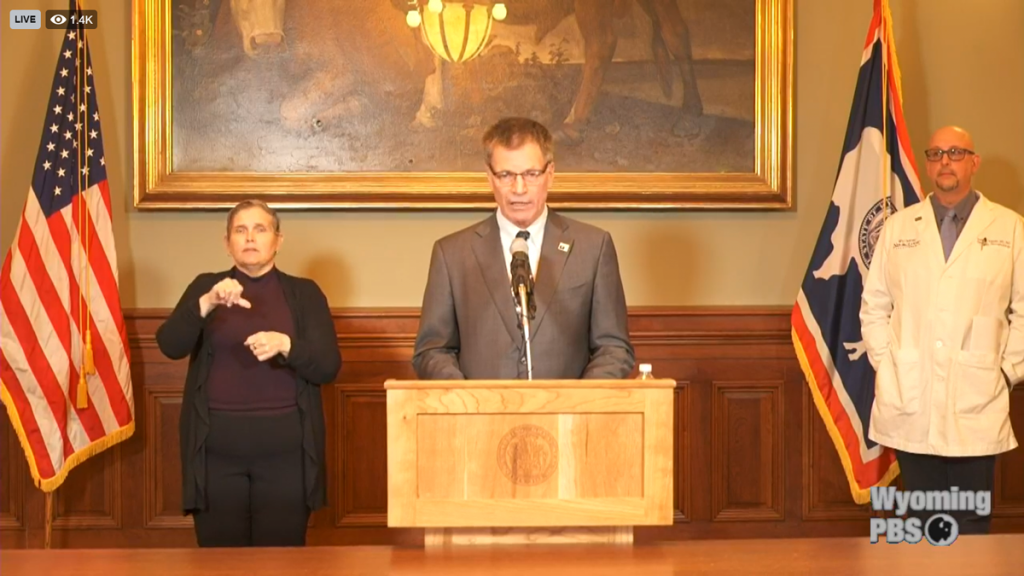 During Governor Mark Gordon’s press conference today, Dr. Alexia Harrist, state health officer, said this increase in cases in most likely due to increased testing in the state.

When SweetwaterNOW asked the governor how many testing kits are available in the state, he handed it over to Dr. Harrist. She said supplies for both collections and testing are limited.

“However, our Public Health Lab was able to manufacture media to create over 2,000 sample collection kits that were distributed throughout the state last week. We will continue in those efforts,” Harrist said.

In addition, they are working with federal partners to receive more testing supplies for the Cheyenne Public Health Laboratory.

“We have been working with our federal partners and exploring all avenues to get testing supplies that we need in our laboratory to be able to conduct the tests,” Harrist said.

The state is asking providers to send specific priority samples to the state lab so that they can turn them around as fast as possible.

The priorities for testing follow CDC guidelines, which prioritizes healthcare workers, hospitalized patients, people who work in long-term care facilities or other communal settings, people over 65, and people who have underlying medical conditions.

Two shipments of PPE from the National Strategic Stockpile have been secured by the state and according to Governor Gordon, those have already gone out or will go out shortly to the counties. He said they have also released some of the state’s county stockpiles.

“We don’t have enough, don’t be wasteful,” Governor Gordon said. “That’s one reason why I support Dr. (David) Wheeler’s recommendation that we stop any elective surgeries.”

Dr. David Wheeler, a neurologist in private practice out of Casper, called for less in person visits and more telehealth, and for all elective procedures to be cancelled in order to preserve PPE.

“I am today encouraging all of my healthcare physicians and other provider colleagues to stop performing in person clinic visits and to instead adopt telehealth as much as possible, except in the cases of emergencies. At the same time, we are recommending as a society that individual providers cancel all elective procedures, which are unnecessarily wasting personal protective equipment that needs to be preserved for the expected surge of patients to come.”

Dr. Wheeler is a member of the Wyoming Medical Society, which represents 600 physicians and P.A.s in the state. He said the society vigorously supports all efforts to keep people safe at home.

“If we do not act now, it is certain that we will use up all of the available resources for healthcare in our state in just the matter of weeks,” Dr. Wheeler said.

Dr. Wheeler added that because of Wyoming’s smaller population, COVID-19 is making a later appearance here than other parts of the nation. This means the state has had longer time to prepare and encourage social distancing.

However, it also means that Wyoming is limited in healthcare supplies, facilities, and personnel.

“When our nurses and doctors start falling ill, and this will happen, there will be no backup. If we let this happen, people will die alone without access to basic care,” Dr. Wheeler said.

He said the state residents can help prevent this by flattening the curve now to not over-burden the hospitals and to slow the spread of the disease. Dr. Wheeler stressed that once the state flattens its curve, and has hit its apex or peak, it is important to not relax on social distancing measures. Otherwise, the virus will just increase again.

“Businesses are going to fail, jobs will disappear, goods and services are going to become more scarce, but these problems can only be made worse if we fail to act now to flatten the curve and limit the death toll,” he said.

“My company, like yours, is struggling. But the health and well being of my family, my friends, my employees, and my community is infinitely more important than the money that we are losing. I bet most of you feel the same way,” Dr. Wheeler concluded.

Governor Gordon said the state has been taking measures to help ease the suffering businesses are seeing. The state has taken steps to expedite unemployment insurance, help businesses access small business loans and grants, and said that banks are standing by ready to help with any evictions or missed payments.

To help restaurants and establishments with bar licenses, Governor Gordon signed an order today that allows those businesses to sell alcohol curbside.

He also said the state is paying close attention to the oil and gas industries, and especially the trona industries, as business across the spectrum has declined.

As for businesses that still have their doors opened, Governor Gordon recommended for them to pace their customers as they come in to avoid overcrowding.

Governor Gordon said he has not imposed a shelter-in-place order on the state, as he believes Wyomingites can act responsibly and follow the other three orders he has already put into place, which limit how many people can gather together.

Teton County has put their own shelter-in-place order through, which Governor Gordon said the state is encouraging counties to do what they feel best.

However, he said if the state puts an order in, there will not be exemptions listed.

Governor Gordon believes people across the state are really starting to understand the seriousness of the issue, and are starting to see the importance of staying at home, social distancing, and practicing good hygiene.

Below is the full press briefing from Monday afternoon: