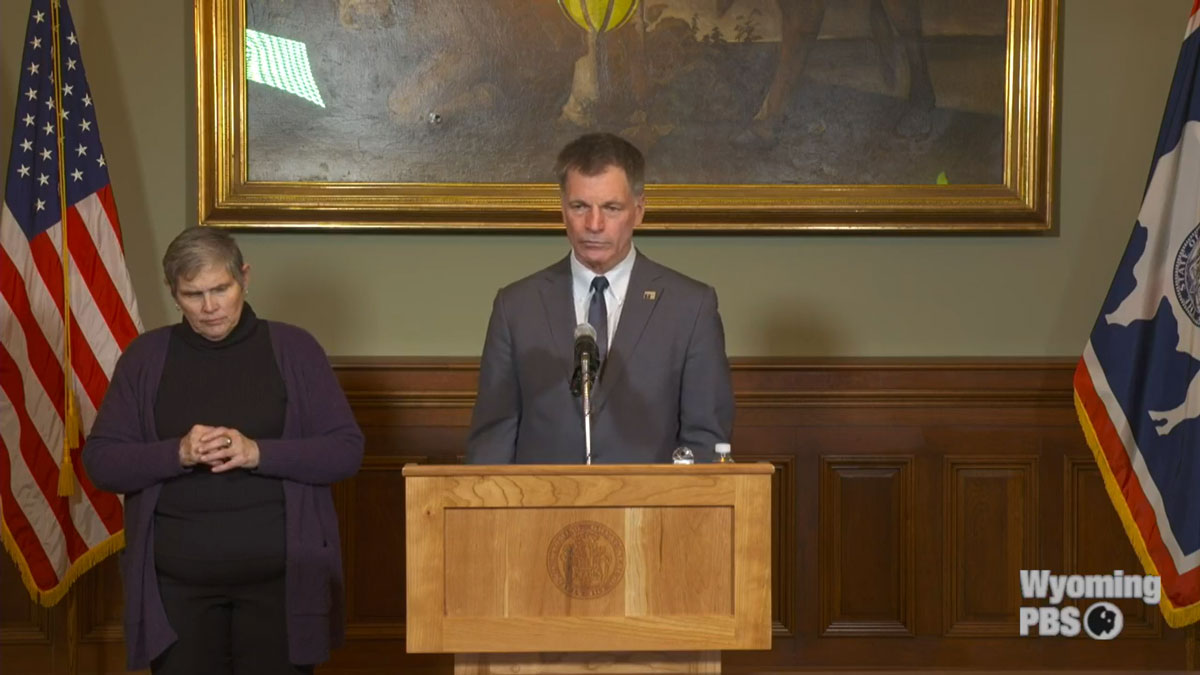 CHEYENNE– Today during a press conference, Governor Mark Gordon furthered his message to Wyomingites to stay at home when possible in an attempt to slow the spread of the COVID-19 Coronavirus.

The idea of social distancing is to flatten the curve of infections and slowing the spread to avoid overburdening the local hospitals. Governor Gordon pointed out the state doesn’t only want to avoid overburdening hospitals for COVID-19 related needs, but for every day medical and emergency needs such as broken bones or strokes.

Governor Gordon said he acknowledges that this pandemic is challenging to Wyoming’s economy, as well as the national economy, but he said public health is a priority as well.

“It is important that Wyoming stays at work, but it is also critically important we protect our public health,” Governor Gordon said.

Ceballos defended the governor’s three state orders by saying the first order was to keep people from going places where they can congregate in large groups. The second order was an expansion of the first order, limiting groups to 10 people. The third order, issued last night, was to halt personal services where people are touching each other.

The three orders were put into place so the state, “hopefully doesn’t have to take more draconian measures,” Ceballos said.

Governor Gordon said he does not want to implement a shelter-in-place order, but that the state does have the tools to do so if necessary.

“We are not trying to shut down Wyoming,” Governor Gordon said.

With Wyoming residents’ voluntary participation in staying home and socially distancing themselves, Gordon believes Wyoming can slow the spread without taking such measures as another order.

“I’m doing my best to avoid a shelter-in-place order,” he said.

All the orders already put into place have been intended to save lives, protect public health, and keep from overburdening hospitals.

Ceballos said the state testing lab has expanded tenfold since it started testing for COVID-19, however, even as the capacity grows, they are still struggling to keep up with the demand.

There is still a shortage of testing supplies both at the state and national levels. Each county has limited sample collection kits.

“We don’t have all that we need,” Ceballos said of testing and collection supplies.

With the ever increasing demand for tests, Ceballos said that is where the residents of Wyoming can help by staying inside as much as possible.

Top priority has been placed on the Department of Family Services to ensure they have everything they need to continue operations. Buchanan said it is important to make sure they can keep working in the field to protect children and families.

According to Buchanan, his task force has been working with local governments and organizations, as there is a large interplay of services between the state and local levels in Wyoming.

Wyoming Department of Workforce Services, Robin Cooley, said the department has added at least 15 individuals to take claims and answer questions. They are also looking into adding more phone lines to decrease wait times when people are calling.

Cooley said the department is seeing more unemployment, but they are keeping up with the demands so far. She said people who make claims should still see their benefits within two days of filing.

One of the departments main focus areas is to look at opportunities to avoid layoffs. They are working with the Workforce Innovation and Opportunity Act to access their rapid response funds, which are usually used during mass layoffs.

Cooley said they would like to use these funds to help employers keep their employees working. This may include purchasing computers and technology for employees so they can work remotely from home.

First Lady Jennie Gordon and her Wyoming Hunger Initiative have put together a task force to make sure Wyomingites are provided food during this pandemic.

The task force is made up of state-wide representatives from nonprofit organizations and school districts.

A result of the task force is that the Wyoming Food Bank of the Rockies will be starting up mobile food pantry sites starting next week. The first one will be in Worland on March 31. Other sites will be: Torrington on April 1, Star Valley on April 2, and Evanston, April 3, with more to come.

The task force is also working with weekend food bag programs around the state to make sure kids are being provided meals on the weekends.

In addition, the summer meal programs for 40 school districts is up and running to provide meals to kids throughout the work week.

More information on the the Wyoming Hunger Initiative’s efforts can be found on its new website: nohungerwyo.org.