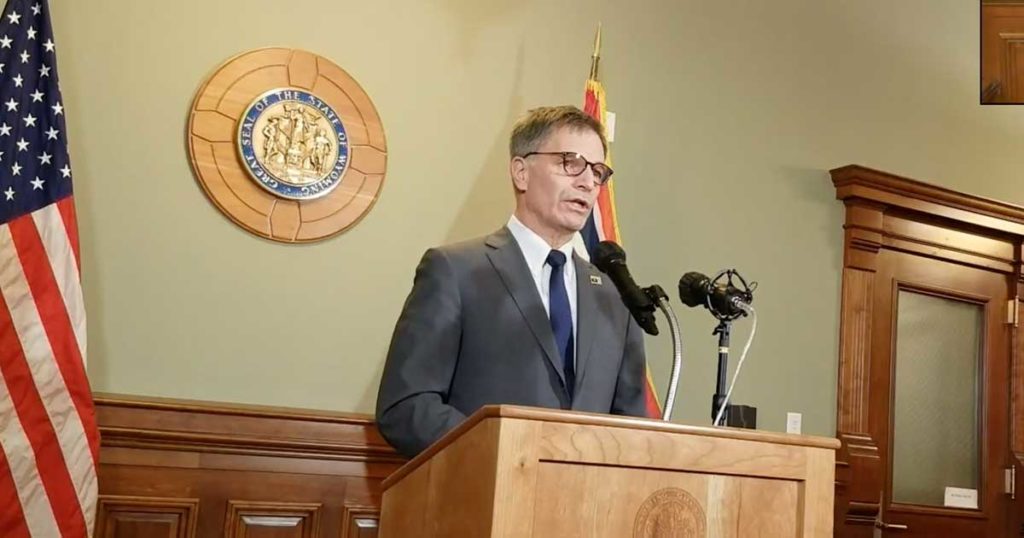 Governor Mark Gordon during a press conference in November 2020.

CHEYENNE — Pushing forward with his continued efforts to improve and simplify Wyoming’s budgeting process, Governor Mark Gordon is calling for an end to the use of multiple spending and savings accounts to fund state government. His goal is to move to one checking and one savings account for Wyoming.

“The complex system that currently exists includes numerous accounts and ‘coffee cans’ that obscure the state’s financial position. This does not serve the public, who deserve a transparent way to know exactly what our fiscal situation is,” Governor Gordon said. “This can be achieved by simplifying the budgeting process.”

Governor Gordon is supporting Senate File 0071 sponsored by the Senate Appropriations Committee that would eliminate the Strategic Investments and Projects Account (SIPA). Established in 2013, the SIPA account was originally intended to capture investment income that would have otherwise flowed into the Permanent Mineral Trust Fund. In recent years accounts have been created that will divert funds from the SIPA, such as the Wyoming State Penitentiary Capital Construction  Account and the Legislative Deficit Control Account.

“These are examples of new pots of money being created which deviate from the original purpose of the SIPA and complicate the budgeting process,” the Governor said.

The bill has received legislative support from Senate Vice President Larry Hicks, a member of the Joint Appropriations Committee:

“The SIPA was a legislatively created invention to pigeon hole money for construction of large projects at a time when the state was running hundreds of millions of dollars in surplus revenues,” Hicks said. “It added significant complexity while reducing transparency of state expenditures in the budget. In recent years it has not been used for what its original purpose was, but rather as a slush fund to pay for programs and projects that should have come out of the state’s general fund. We no longer have surplus revenues in Wyoming and it’s time to restore transparency in our budgeting process by eliminating the SIPA account.”

The Governor said that he believes this bill is a good first step towards only having one checking account. He will work on other proposals with legislators this session and over the next year.