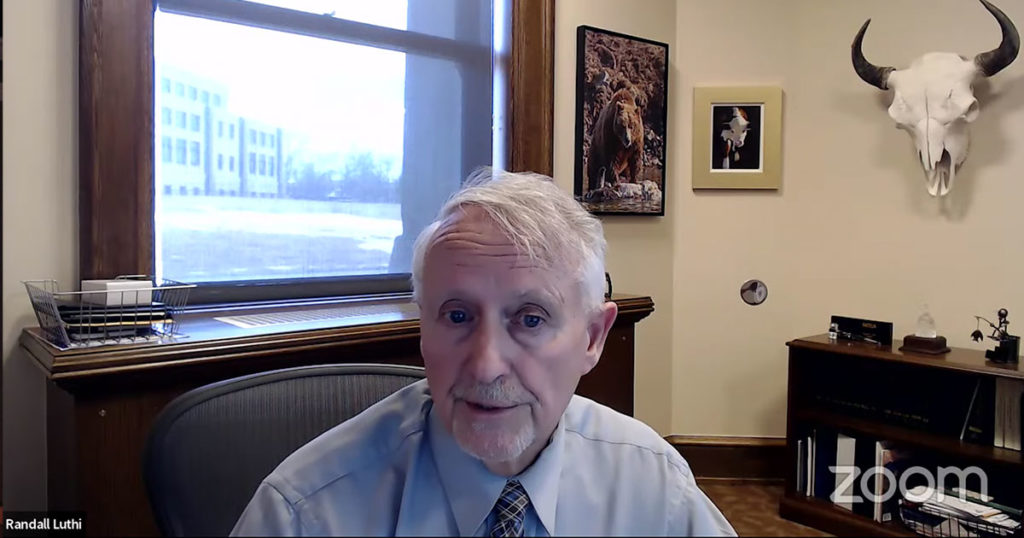 Commission Chairman Jeff Smith said the Commission knows there’s an ongoing battle with the Jim Bridger plant and that they want to know where things currently stand.

“That’s of grave concern to us, if Bridger were to close down any earlier than it’s already scheduled,” Smith said.

Luthi said it is also a concern for Gov. Gordon and that Jim Bridger has been pushed to the forefront of this issue.

“The Governor shares your concern,” Luthi said. “It’s our goal that we don’t shut down any coal fired units before their time. In fact, we’re looking at ways we can try to extend them.”

The Current Issue at Jim Bridger

Back in 2014, the U.S. Environmental Protection Agency (EPA) set forth a State Implementation Plan with regional haze requirements in the interest of reducing the amount of particulate matter that can be see at the national parks and monuments, according to Luthi. Following this, it became a requirement that all four Jim Bridger units have powerful pollutant equipment, known at SER equipment, that would help with mitigating nitric oxide and sulfur dioxide pollution.

In 2019, Rocky Mountain Power requested the Wyoming Department of Environmental Quality (DEQ) to look at an alternative compliance, according to Luthi.

“Meaning they thought they could reach the same visual standards and guidelines the regional haze requirements have by doing so a different way. And that was actually by reducing the amount that they were going to run the units 1 and 2. The DEQ looked at that and they agreed,” Luthi said.

In 2020, Luthi said work began with the EPA on revising the State Implementation Pan. According to Luthi, the EPA at both the regional and national level were on board at that time. However, when the plan went to the federal register for public comment stage, the current administration said they didn’t want to go any further with this plan and instead wanted to stay with the original 2014 State Implementation Plan.

“What that means is we had word that they weren’t going to do this probably in early to mid summer but it doesn’t really matter because Rocky Mountain Power in no way could have put that SER equipment on units 1 and 2 in the time that they had provided,” Luthi said.

The equipment was supposed to be added to unit 2 by the end of last year, Luthi said. Luthi said they wanted to move forward with the revised plan, but the EPA did not make a decision on it. Therefore, Gov. Gordon sent the EPA a letter with intent to sue, giving 60 days notice as per the Clean Air Act. Last week, however, the EPA announced that they were not going to approve the revised State Implementation Plan.

The Clean Air Act allows Gov. Gordon to put in a suspension order that would suspend the closure of the unit for four months, which Gov. Gordon has done. Luthi said the EPA could disapprove that suspension order, but he has no indication that they will.

“I have no indication that they’re going to challenge it and even if they did, we feel pretty comfortable,” Luthi said.

This leaves the state with four months to try to come up with a plan for the future of units 1 and 2.

“This gives us four months we think to try to figure out if there’s a different solution and that’s what’s being considered right now,” Luthi said.

He said it appears the EPA would be okay with units 1 and 2 being converted to natural gas, which Rocky Mountain Power stated in its Integrated Resource Plan last summer that the plan is to do so. Therefore, the state is looking at that.

The four month suspension order will be expired on May 1, meaning the state has until then to figure out a path forward. Luthi added that there is litigation going on behind all this as well.

“There’s a lot of moving parts, I just don’t have a lot of answers for you at the moment other than we’ve kept it open so far,” Luthi said.

Luthi said in addition to this ongoing battle at Jim Bridger, the state is also looking to utilize Sweetwater County for future carbon projects.

With the federal infrastructure bill, Luthi said there are billions of dollars in federal monies that may be dedicated to CO2 projects. The state wants to make sure Wyoming is considered in those CO2 storage and carbon capture projects.

He said Rock Springs could serve as a premier site for CO2 storage.

“Sweetwater County is so important to what may or may not happen in the state of Wyoming,” Luthi said.

Luthi added that there are two carbon capture projects that need to go on a coal fired unit.

“So what better place than Wyoming for that?” Luthi said.

The Commission and County Assessor Dave Divis asked to be kept up to date on issues and potential projects taking place in Sweetwater County.