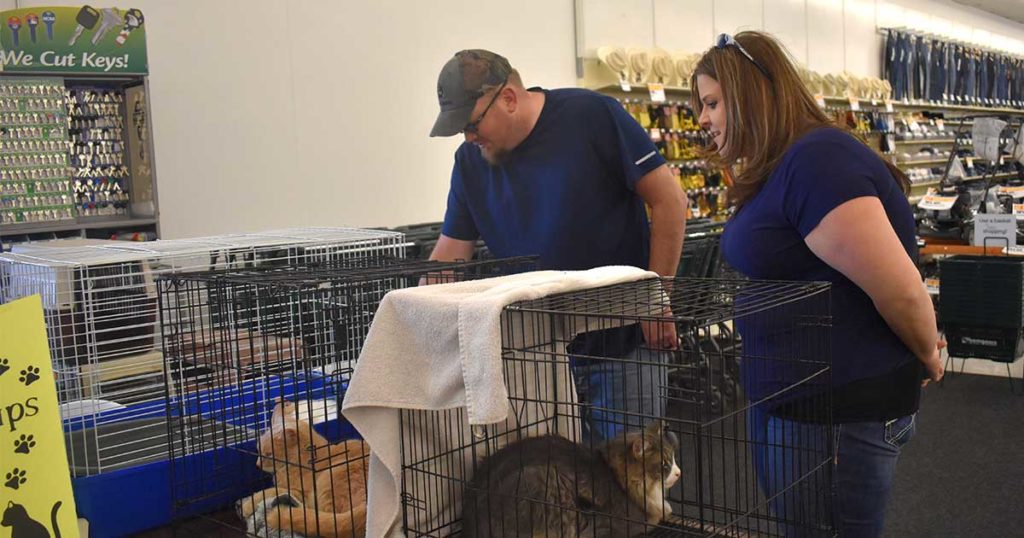 A Rock Springs couple look at some cats that are up for adoption.

GREEN RIVER — Green River Animal Control is hosting an animal adoption event at Bomgaars Friday and Saturday, August 14 and 15, in which they are adopting out animals they had flown in.

They started the event at 11 am on Friday with four puppies from Lander, five dogs from Riverton, and several dogs and cats from Texas. The animals from Texas were flown in by Dog Is My CoPilot, a rescue organization that flies animals across the nation to place them in shelters that will give them the best chance for adoption.

Green River Animal Control has been working with Dog Is My CoPilot since May, and has helped place several animals into loving homes through their collaboration.

The Green River Animal Control Department has had enormous success with adoption events in the past, and this event has proven to be another success.

By 2 pm Friday, Green River Animal Control had already adopted out all of the puppies and only had three dogs left. They had adopted out one cat and one cat went to a foster family as well.

“We had animals lined up from those carts to those racks over there, and almost all of them have been adopted,” Lydia Holmes, Animal Control Officer said.

Prior to the adoption event, the pets were groomed by Paw Spa, free of charge, and all pets have received all or some of their vaccines. Green River Animal Control is also offering microchips for animals, whether adopted at the event or brought to the event for the microchip, for $20 per microchip.

The adoption event will continue on Saturday at Bomgaars from 11 am to 3 pm.