GREEN RIVER — The Green River Fire Department (GRFD) responded to two calls early this morning for a carbon monoxide leak and smoke inside an apartment building.

At 2:42 a.m. GRFD was dispatched to Love’s Travel Stop in Jamestown for a carbon monoxide alarm. Upon arrival, Assistant Fire Chief Bill Robinson, Castle Rock Ambulance Service, and Engine 2 with Lieutenant Austin Rider and five firefighters discovered the leak was coming from the carbon dioxide lines for the fountain drink system.

GRFD was able to get the system shut down and isolated the leak. After ventilating the area, re-entry was allowed for employees and customers. There were no injuries and business was able to resume at the Love’s Travel Stop.

At 5:40 a.m. GRFD and Castle Rock Ambulance Service were dispatched to a report of smoke in an apartment on Cumorah. Upon arrival, Assistant Fire Chief Robinson along with the Green River Police Department were able to determine there was no active fire, though the apartment was found with smoke inside.

Engine 2 with Captain Jeb Burnett and five firefighters entered and ventilated the apartment. Through investigation, a faulty baseboard heater was found to be the cause.

The Green River Fire Department would like to thank Castle Rock Ambulance as well as Green River Police Department and Sweetwater Combined Communications Center for their assistance with these types of calls. Working together results in a safe outcome for all residents and businesses. 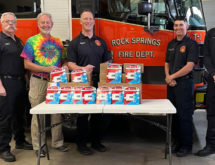