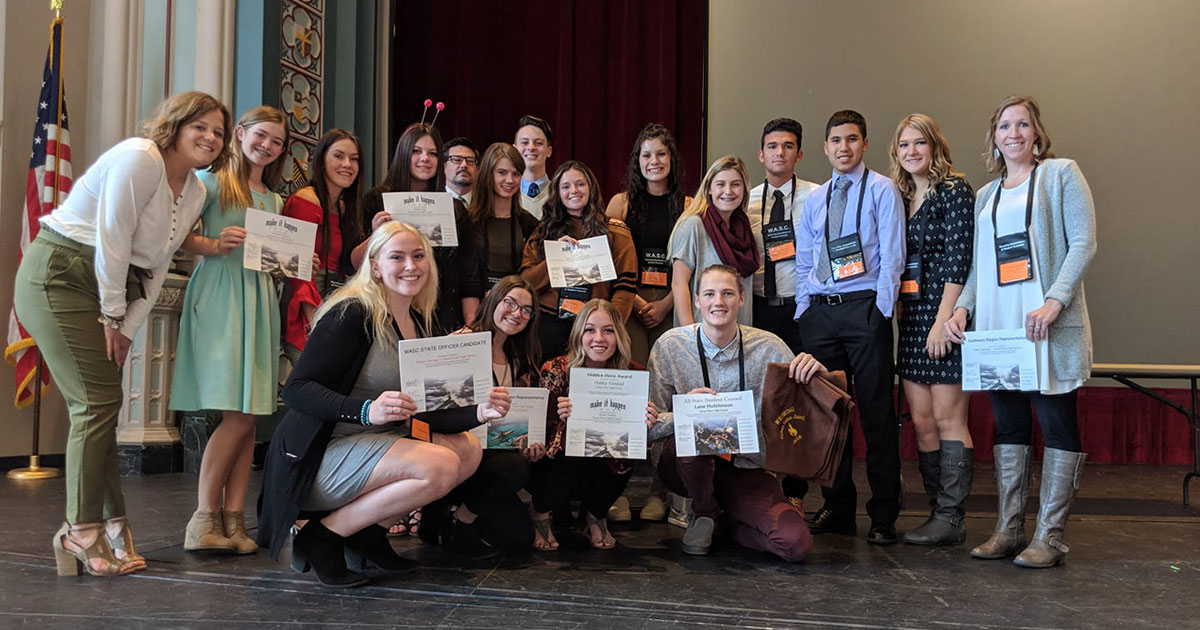 GREEN RIVER– After seven years as the Green River High School Student Council sponsor, Amanda Santhuff is resigning from the position. Her impact on the student council will be everlasting.

Santhuff, an English teacher at GRHS, was the Student Council Sponsor at Rock Springs High School for six years prior to GRHS. Between her time at GRHS and RSHS, she has a total of 13 years in this position.

“Mrs. Santhuff has shaped the council into an amazing activity that all high schoolers should want to be a part of. She has bridged the gap between school and community,” Hailey Finstad, 2018-19 Student Body President said.

Santhuff’s efforts with Make-A-Wish and the annual blood drive are proof enough that she has been able to rally the community into the school’s activities and projects.

Throughout her 13 years as student council sponsor, she has helped to raise $500,000 for Make-A-Wish Wyoming.

The students all agree that Santhuff has created a familial environment within the student council.

“Mrs. Santhuff has shaped the council into a family. No matter what, she has your back and will do anything for you. She gives everyone advice and support that not only helps them in student council but will also help them throughout their entire lives,” Kendahl Coy, 2018-19 Senior Class Representative said.

Finstad considers Santhuff to be like a second mother, not only to her but to many of the kids that cross paths with Santhuff.

“She has became a second mom to all of us, including myself. Never would I have imagined myself growing so close to a school teacher, but I now see it is one of the strongest, most inspiring relationships I have,” Finstad said.

“Mrs. Santhuff is the embodiment of an angel. She is the most selfless and kind human I have ever come across. In the council she was always strong, even when it got hard, which it did. She is a mom to every kid that enters her life. We all laughed and cried together, whether we were going through a victory or a failure,” Jauregui said.

According to Jauregui, Santhuff was always able to pick her students up and create enthusiasm when things got a little stressful and tough.

After fundraising all day long during Make-A-Wish, and planning numerous events, Santhuff would gather the kids up and tell them how much she loved them. She would then sing the well-known Pump It Up cheer to create some energy and brighten the mood.

“She always knew when we needed it,” Jauregui said, adding that it is her favorite memory of Santhuff as sponsor.

Santhuff’s presence within the Student Council has not only created a lasting impression on the council itself, but also on the kids within it.

She has taught the kids to believe in themselves and try new things. For many, she wasn’t just a teacher or a sponsor, but a role model and friend.

“She has been a positive role model to me, and all the students at GRHS. She has taught me to never be afraid of trying new things and always believe in myself,” Finstad said. “Serving as Student Body President, I got very close with her this year and I truly admire her and am so grateful she was my sponsor, role model, and second mom.”

Coy agrees that Santhuff teaches her students to believe in themselves, even helping Coy to break through her shyness and become more outspoken.

“Her contribution to myself personally has been huge. When I started student council I was shy, reserved, and would not public speak. Thanks to her, I have become outspoken, strong, and I went class to class speaking about the blood drive,” Coy said.

Santhuff has also taught Coy to be kind and considerate of others.

“She has taught me patience and kindness. She has shown me how to solve problems when it seems impossible and she has shown me how to take everyone into consideration. She has honestly helped me in more ways than I will ever know,” Coy said. “She has also become family to me. I know that even though I am graduating and she is leaving student council, she will forever be in my life.”

If it were not for Santhuff’s belief in her students’ abilities, Jauregui would not have ran for Student Body Vice President this past school year. With a push from Santhuff, Jauregui ran and won. This upcoming school year, she will be the Senior Class President.

“This council won’t be the same without her, but she’s built us into a legacy that could never be torn down. We’re ready to take over because she’s raised us to be ready,” Jauregui said.