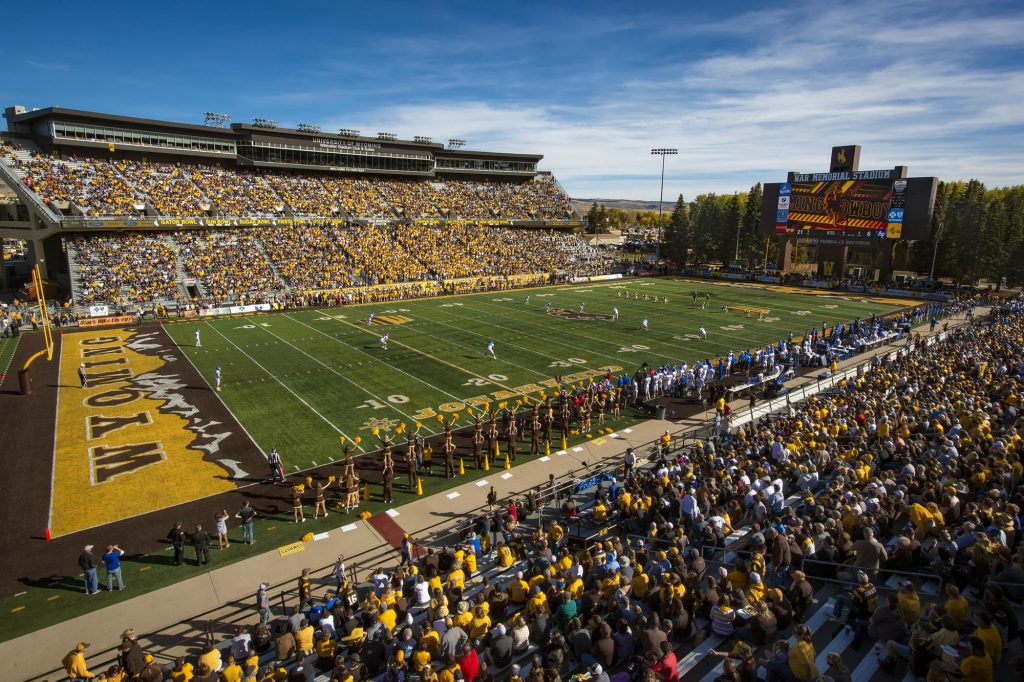 LARAMIE — University of Wyoming Athletics wants to make Cowboy Football fans aware of a few changes to Game Days this season prior to Saturday’s first home game versus Missouri.

University of Wyoming Athletics looks forward to another exciting and successful season. We want all Cowboy and Cowgirl fans of all ages to have as enjoyable an experience at UW Athletics events as possible, while providing for a friendly and safe environment for fans.

A first-time event in the history of War Memorial Stadium is being planned for Wyoming’s 2019 season opener versus Missouri on Aug. 31. Wyoming Athletics is asking all Cowboy fans to participate in the “Stripe Out” of War Memorial Stadium by wearing Brown or Gold t-shirts based on their seat location. The goal is to have alternating sections of the stadium be Brown and Gold.

Reconstruction of a section of central Grand Avenue in Laramie has prompted local officials to recommend alternate routes for people traveling to attend UW’s football game against Missouri this weekend.

In the event the Grand Avenue project is not completed as of Saturday morning, travelers to the 5:30 p.m. UW-Missouri football game are advised to use the following routes:

New Pregame Show to be Featured

Fans are encouraged to get into War Memorial Stadium for the new pregame show. The show will start 40 minutes prior to kickoff.

The University of Wyoming Athletics Department is encouraging fans to use clear bags inside War Memorial Stadium.

Shuttle service from Cowboy Field Lot will be available 2.5 hours prior to game time and will run until 45 minutes after end of the game.

Information for University of Wyoming Students

The Student Gate for home football games this season at War Memorial Stadium will be Gate 3, located on the southeast corner of the stadium.

All UW students please remember to download the “WYO Wild Bunch App” from the Apple App Store prior to Saturday’s game so that you can gain admission to the game.

Seatbacks will not be sold on game days this season.  Fans who wish to bring their own seatbacks may due so as long as their seatbacks are no wider than 16.5 inches.

∙Coaches may now pick up  tickets inside the Main Entrance to the Arena-Auditorium near the Kenny Sailors statue on the east side of the AA.

Create an easy ID screening and wrist-banding system. Each fan wishing to purchase alcohol in the stadium on game days will have their ID checked verifying legal age and will be provided a wrist band for that game.

ID Checking/wrist banding will done in the parking lots and inside the Indoor Practice Facility around the stadium for several hours prior to the game. Look for golf carts with beer and wristband signs.

Other ID/Wrist-Banding stations will be available at the selling locations inside War Memorial Stadium.

Beer will be sold inside War Memorial Stadium beginning two (2) hours prior to kick off – when stadium gates open.

There will be 12 selling locations within War Memorial Stadium.

The South End Zone Beer Garden area will provide fans a chance to enjoy drinks with their friends from a field-level location while still having visibility of the field during the game.  .

There will be some express beer stands and cash only lines to speed up the service.

Each individual may purchase 2 drinks (beer) per transaction.

Pull off tabs will be for beer purchases once an individual enters the stadium or arena.

Majority of beer products in the stadium will be sold in aluminum bottles (caps removed) instead of plastic cups.

Beer will be poured using the state-of-the-art “Bottoms Up” draft beer dispensing system, which fills through the bottom of specially designed plastic cups. The “Bottoms Up” system offers extremely fast pouring and minimal foam in each pour while more effectively utilizing (less waste) the beer from each keg. These location will be located on the East Side of the Stadium behind the student section and in the beer garden.

Sales of beer will stop at the end of the 3rd quarter.

Information gathered on fans from scanners that are part of the ID/Wrist-Banding stations will be deleted at the end of each game and will not be retained by the University of Wyoming.

SafeRide, the on-call public transportation service, will be available on game days to serve the needs of fans. Rides are offered to UW students, faculty, staff, and Laramie community members and visitors. During home football games, SafeRide will be located at Gate 1 (southwest corner) of War Memorial Stadium.

SafeRide’s service areas include the Laramie city limits. However, SafeRide will not pick up/drop off at specific locations within downtown Laramie. Riders wishing to be picked up/dropped off downtown will need to utilize the SafeRide office located at 3rd Street & Garfield. There is no on-board fare for utilizing SafeRide. Requesting a ride is simple.  Call 307-766-7433 (307-766-RIDE) or request your ride through the Transloc Rider App.

Individuals must be 21 or older to purchase, possess or consume alcohol.

Patrons cannot bring their own alcohol into the stadium.

IDs must be checked and wristbands/hand stamps obtained before purchase of alcohol in the stadium.

Each individual may purchase 2 drinks (beer) per transaction.

Sales of beer will stop at the end of the 3rd quarter (football and women’s basketball) and at the 10-minute mark in the second half of men’s basketball games.

Tailgating opportunities for fans in designated areas surrounding War Memorial Stadium and the Pepsi Pregame Zone in the Indoor Practice Facility will still be offered for the 2019 Wyoming Football season.

All tailgating activities are confined to a patron’s specific parking space(s).

Open containers may not be carried on or across public streets.

No Re-Entry Allowed: Once fans have entered War Memorial Stadium on game days if they choose to leave the stadium prior to conclusion of the game there will be no re-entry to the stadium allowed.