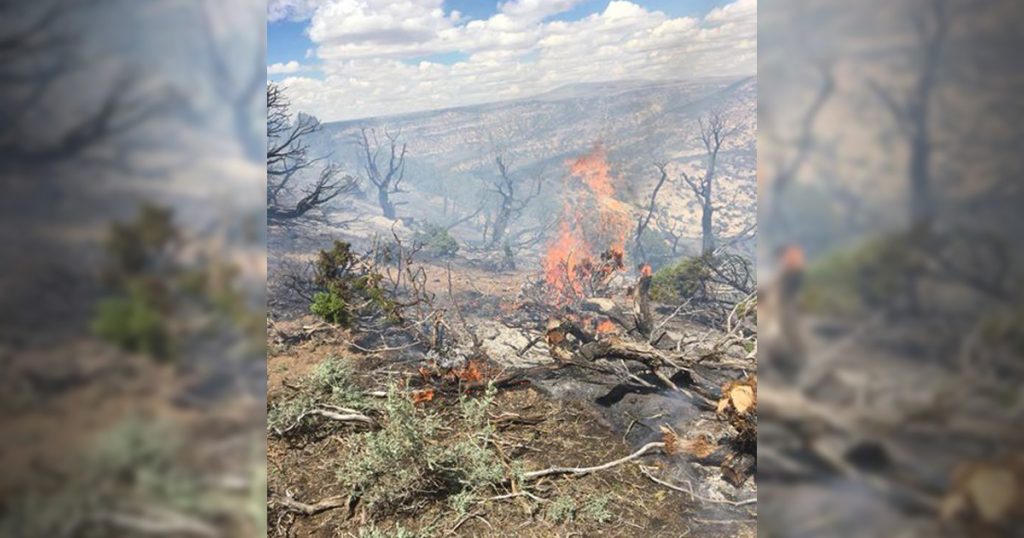 SWEETWATER COUNTY — Sweetwater County Fire District #1, and the other area stations that responded to support them, had a very busy weekend due to high temperatures, wind, and–in one case–fireworks.

“Things are really dry. It’s ready to burn with the wind we’ve had, combined with the higher temperatures. It’s drying out quick. It’s a precursor of what we could have happen this 4th of July,” said Kitchner.

Kitchner added that he hopes people use common sense during this very dry upcoming 4th of July.

The first wildland fire started on Friday, June 22 at around 11:30 am in the Little Bitter Creek drainage on Earnest Butte.

This fire was located in private land, but was so remote that firefighters had to hike in to put out the 3-acre fire.

The fire is believed to have been started by lightning because of the remote location with limited access due to no roads.

Crews were on scene for 9 hours containing the fire and taking care of hot spots, along with a few hours the next day for some further cleanup. Helicopters were called in to fight the fire. Watch the video below.

Crews were called to a another 6-acre wildland fire on Saturday, June 23 at around 3:30 pm.

This fire was located on Quealy Road and the smoke was visible from town. This fire was started by kids with fireworks and occurred on BLM land.

Kitchner said that lighting fireworks on BLM land is illegal. He wasn’t sure if the BLM was able to locate the kids or if charged would be filed.

Crews were on scene for 3 hours.

Crews also responded to a semi-trailer fire at Milepost 6 on Highway 191 North.

The brakes of a semi-trailer full of potatoes caught fire and spread to the trailer. The trailer was a total loss, but the truck was saved.

Crews were on scene about 2 hours.