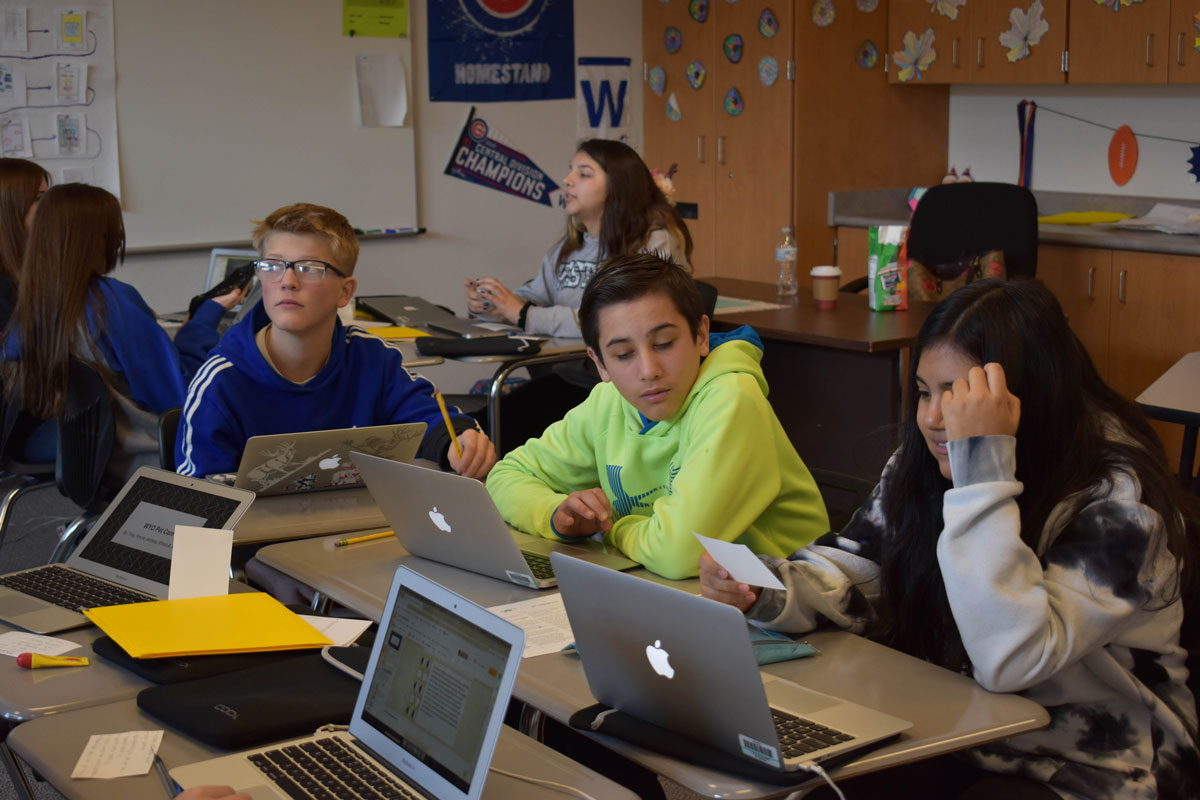 According to Kris Cundall, Rock Springs Junior High Principal, IT has fewer people than the demand for jobs, so encouraging kids while they’re young is important.

Starting on Tuesday, the kids worked in groups to identify a Wyoming problem and then used the design process to develop an app to act as a solution.

The winners get to go to Casper for the state goIT competition.

The following apps were presented in the gymnasium:

Wyo Jobs: an app for employers and the work force to use in hopes of decreasing the unemployment rate.

The app would allow research of jobs all in one easy location. Features would include GPS, category, messaging, and ratings.

Help First: this app addresses Wyoming’s high suicide rate. It would allow people to receive support if they or someone they know is experiencing suicidal thoughts.

The students said Wyoming ranks third highest in the country for number of deaths by suicide, and therefore, they found this to be a crucial issue that needs to be addressed.

The app would help people struggling with suicidal thoughts with features such as inspirational quotes, signs to help detect suicidal thoughts, ways to speak with a counselor, and resources such as suicide prevention hotlines and websites.

Wonders of Wyoming: this app’s purpose would be to encourage tourism to the state by showing them specific places of interest across the state.

The app would include a map of what events are going on throughout the state, a list of tourist places and attractions, a list of fun facts about Wyoming, a quiz to inform people about what Wyoming has to offer, and a page where users can leave questions, comments, and reviews.

Fishing Wyoming: to encourage people to get out and enjoy the state, this app would help people find the best places to fish in Wyoming.

The app would be specific to the state, showing a map of Wyoming water sources, the finest fishing spots, a trophy page to show off people’s catches, and a search bar for any questions.

30 Day Friends: this app would allow people who are being bullied or isolated to chat with people for 30 days in hopes of building a new friendship. The purpose of this app would be to decrease the state’s suicide rate.

The app would provide hotlines for substance abuse and suicide, a feature that allows the user to find a match to communicate with, after party chats where people can continue talking after the 30 days has passed, and customization of avatars in case people don’t want to use a photo of themselves.

Snow Busters: this app would allow people to hire workers for snow removal at an affordable cost.

The features would include a payment portal, reviews of the workers, and phone and messaging so the user can contact the worker.

The panel of judges in the gymnasium, which included professionals from a variety of different fields, deliberated and selected the top two groups, as well as an alternate.

Two groups were also selected out of the apps that were presented in the auditorium:

The students were thrilled to have their groups announced as winners. After three days of hard work, it paid off. The kids had to learn about what IT is, how to create an app, as well as identifying a problem and researching ways to solve it. Though goIT was a lot of work, it showed the students what they are capable of accomplishing.