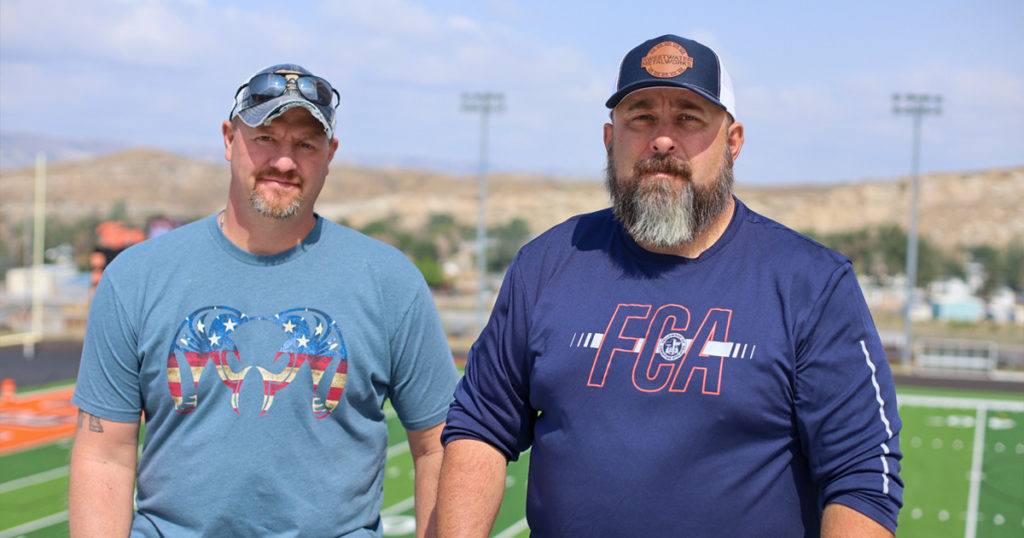 Running and scaling a booster club is almost like having another full-time job.

At least that’s how Joey Faigl and Clint Eddy best describe it.

It all started a few years ago when Faigl and Eddy grew tired of seeing opposing high schools like Sheridan show off their newest piece of equipment for the football team or witnessing a town’s school spirit in the stands. Back home in Rock Springs, that excitement and dedication just wasn’t on the same level.

In 2019, the two grew eager to try and start some kind of booster club with the intent to make Rock Springs what it once used to be. Faigl, who played high school sports at Rock Springs High School (RSHS), remembers stands being full, fierce school spirit shown and how Rock Springs was one of the last places opposing teams wanted to come compete against.

“School spirit has died off in the last 20 years,” Faigl said.

Initially their idea was met with some pushback, which put the idea in jeopardy. The school had pointed out some roadblocks when the two presented the idea and for the time being the booster club took a back seat.

But it didn’t take a back seat in the minds of Faigl and Eddy. They weren’t about to take no for an answer.

One day, Eddy posted on his personal Facebook page some images of signs that they wanted to put in around Tiger Stadium.

“I just put it on Facebook to see what kind of stuff I could stir up,” Eddy said.

He had over 200 replies on Facebook from people saying that they had small donations and even some alumni reached out saying they would purchase a whole sign.

It was after that post that Faigl and Eddy knew there was huge potential to make RSHS what it once used to be.

Without the school’s blessing, Faigl grew a wild hair and decided he and Eddy could at least do something for the football team.

A few calls later, Faigl had a group of individuals ready to help. And they’ve been busy ever since.

But perhaps the biggest challenge is yet to come as the school has handed off all fundraising efforts to Huddle Up Rock Springs Booster Club. In the span of two months, the booster club went from focusing on the football team only to now incorporating all RSHS athletics and activitites.

To say at the least, they have their work cut out for them.

“My youngest is a golf player and they need it just as much as the football program,” Faigl said.

“If you want change, you have to be the change. You have to step up and do things,” Eddy said.

Faigl and Eddy said that many projects for the football team and the school as a whole have already begun.

Some of the top priorities are the stadium signs which are on the verge of being printed and installed. Tiger Stadium will also see a new mesh covering for the stadium fence. Window wraps over the school windows will be done, featuring sports like football, track and soccer. Another project is getting the locker room a TV for film and some signage. A huge project in the future for an actual film room will be done. The projects won’t be ending any time soon.

During football season there will be tailgating which will happen under the booster club. The tailgating will happen out by the pool area in the parking lot. It will incorporate the band and cheer team. Around 250 burgers will be served. It will be a big part of home Tiger football games.

These are the signs that are being put around Tiger Stadium. Courtesy photo, Huddle Up Rock Springs Booster Club Facebook

In addition, Eddy said bigger businesses have asked about future projects that they can fund and brand as they are willing to help out.

“People know and want this place to be successful, they just haven’t had a way to do anything,” Eddy said. “The biggest surprise is it seems like Rock Springs just continues to get things done. All they need is to be asked or given a reason.”

“Our economy isn’t where it needs to be, but companies are stepping up and still contributing. I think that’s unbelievable,” Faigl said.

When people come to Rock Springs and see it’s united, Eddy said that he believes that the change they are bringing about will have further ramifications than what many people realize. He’s convinced that people will look around and see there’s a benefit to coming here.

Becoming the change you want to see is exactly what Joey Faigl and Clint Eddy have committed doing for RSHS athletics and activities.

“I want Rock Springs to be the best. I live here,” Eddy said.

“Even after my kids graduate I will do every part to make sure that this continues and achieves what it needs to achieve,” Faigl said.

How You Can Help

If you’d like to get involved and revive the Tiger spirit, you can check out the Huddle Up Rock Springs Booster Club on Facebook here.