LARAMIE – The University of Wyoming men’s golf team begins its 2016-17 season on Saturday in Colorado Springs, Colo., at the 48th annual Gene Miranda Invitational. The tournament will be played at the Eisenhower Golf Club Blue Course on the campus of the U.S. Air Force Academy.

Led by 2016 Mountain West Coach of the Year Joe Jensen and returning nearly the same roster from 2015-16, the Cowboys will begin the 2016-17 campaign against 14 opposing teams starting at 8:15 a.m. MT Saturday. Golfers will play 36 holes on Saturday followed by an 18-hole final round on Sunday beginning at 7:30 a.m. MT.

McCullough and Wallen went on to become the Cowboys’ top two finishers at the MW championships in April 2016, with McCullough tying for sixth at 211 (-5) while Wallen tied for 15th at 214 (-2). As a team, Wyoming tied its second-best conference finish since the inception of the Mountain West, taking sixth place overall at the 2016 MW championships.

The Eisenhower Golf Club Blue Course features a 72-stroke par and measures 7,461 yards. The first round of the Gene Miranda Invitational will begin with a shotgun start, while pairings and tee times for Sunday’s final round will be determined by team score. 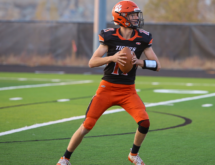