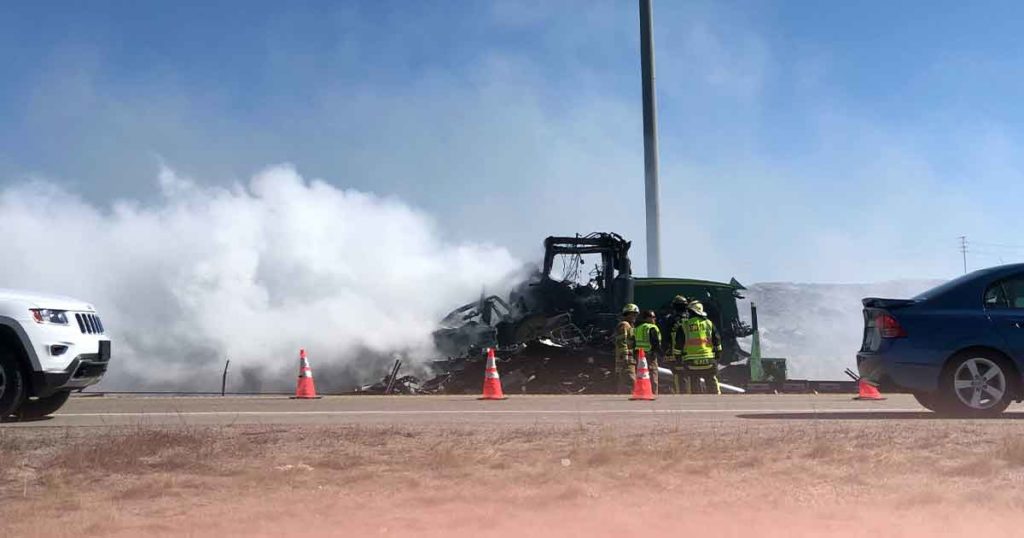 A Minnesota man died in a head-on collision yesterday on Interstate 80 near milepost 104. SweetwaterNOW photo by Kaylee Hughes

ROCK SPRINGS — Driver fatigue and equipment failure is being investigated as possible causes for a fatal crash near Rock Springs, according to the Wyoming Highway Patrol (WHP).

On March 31 at 3:10 p.m. WHP troopers responded to a motor-vehicle collision that resulted in a fatality around milepost 104 on Interstate 80 near Rock Springs, the press release stated.

A 2018 Volvo commercial truck was headed west on Interstate 80. The vehicle crossed the median and entered the eastbound lanes colliding head-on with a 2007 Peterbilt commercial truck. The collision created a large explosion causing both commercial trucks to become engulfed in flames, according to the release.

The driver of the Peterbilt has been identified as 33-year-old Ellsworth, Minnesota, resident Daniel J. Debeer. Due to the extent of damage, it is unknown if a seatbelt was in use. Debeer succumbed to his injuries at the scene of the crash, the release states.

The driver of the Volvo has been identified as 25-year-old Aurora, Colorado, resident Justin Nzaramba.  Nzaramba was wearing his seatbelt and treated at the scene of the crash for his injuries.

Driver fatigue and equipment failure on the part of Nzaramba is being investigated as potential contributing factors, WHP stated in the release.