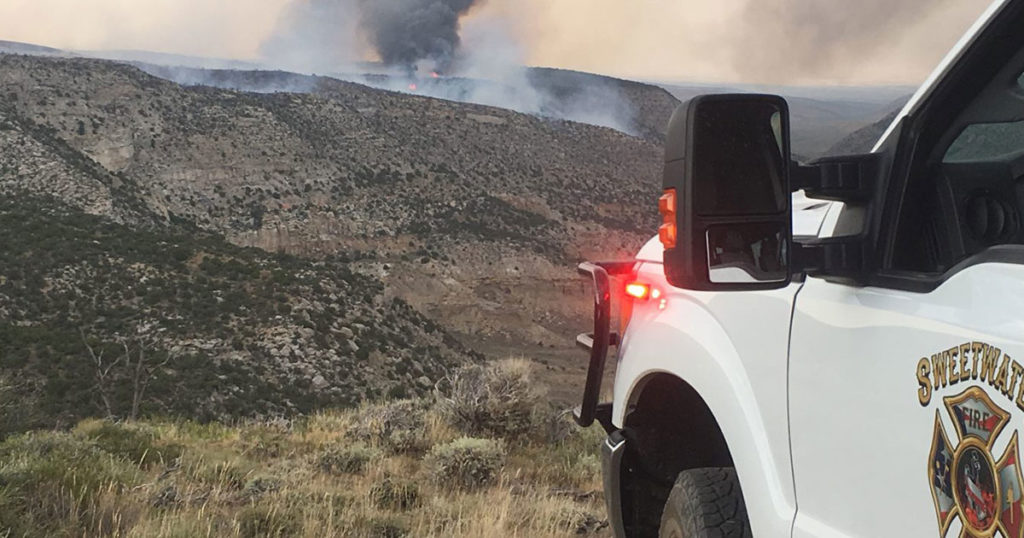 The Commission will meet at 8:30 a.m. Tuesday, March 1, at the Sweetwater County Courthouse.

During the December 7 Commission meeting, Commissioners Mary Thoman and Roy Lloyd said they needed to start looking at how much money is going toward the county fire department.

However, the consideration of the mobilization agreement comes with opposition from Sweetwater County Fire Warden Mike Bournazian.

“I don’t support this at all,” Bournazian told SweetwaterNOW. “I think it’s going to be a detriment to the county.”

The recommendation the Commission is considering is to go into a contract with the Green River Fire Department (GRFD) for $200,000. As per the agreement, the GRFD would be authorized to respond to fire calls west of mile marker 95 on Interstate 80, including all land, north and south, within the boundaries Sweetwater County. Another contract for the same amount would also be put into place with Sweetwater County Fire District #1.

If these contracts are approved by the Commission, the Sweetwater County Fire Department will essentially be liquidated, according to Bournazian.

Bournazian explained to SweetwaterNOW that to cover the eastern part of the county, the county will also need to work with Wamsutter’s fire department, which could include additional costs for the county. Bournazian suspects that if GRFD and Fire District #1 are both receiving $200,000 for these agreements, Wamsutter will require payment as well. This means the cost of the mobilization agreements could cost more than $400,000.

He added that the Sweetwater County Fire Department has been operating with a $700,000 budget, however, for the past few years has brought back $100,000 in revenue. County Fire is reimbursed 100 percent of their payroll and their equipment is paid an hourly rate when they assist on fires outside of the county. This means the the County Fire Department costs about $600,000 a year to operate.

Along with concerns of whether these agreements will actually cut costs for the county, Bournazian worries that the county will be left with few resources to fight wildland fires if the county fire department is eliminated.

Bournazian said that currently, GRFD only has one wildland fire vehicle, whereas the Sweetwater County Fire Department has five wildland engines, a water tender, and several off-road vehicles.

Bournazian said there are many unanswered questions with where the county’s fire equipment goes if the department is shut down. Since a lot of the equipment is purchased with the help of state and federal grants, he does not know if the equipment will have to go back to the state or federal organizations or if it can be transferred to the local departments.

Additionally, County Fire has mutual aid agreements with seven neighboring counties and states, and Bournazian does not know what happens with these agreements if the department is shut down.

I don’t think it’s in the county’s best interest to move forward until a lot of these questions are answered.

The county fire department covers the county with four full-time staff, 14 seasonal staff, and 15 volunteer firefighters. Bournazian said that though these employees are important to fighting wildland fires in the county, they do more than just that.

The Sweetwater County Fire Department responds to structure fires, as well as does multiple projects for the county and community. Bournazian said the fire department just recently finished helping construct a three-mile mountain bike track for Western Wyoming Community College, and the department does a number of projects for all the county parks including moving brush.

For larger wildland fires, the county department often works in coordination with other departments. He worries that if the department is eliminated, there will be a lack of resources at these larger fires.

If they take these firefighters out of the mix, who are they going to call when we have a large wildfire? That’s my biggest concern. Are they going to wait for the BLM to call resources out of state?

If approved by all parties, the term of the agreement will be effective immediately and will expire on June 30, 2022.

Bournazian said that before the Commission makes any decisions on how to move forward, the land owners and business owners on the county’s unincorporated land should be afforded the opportunity to have a say in how they’d like fire protection provided.