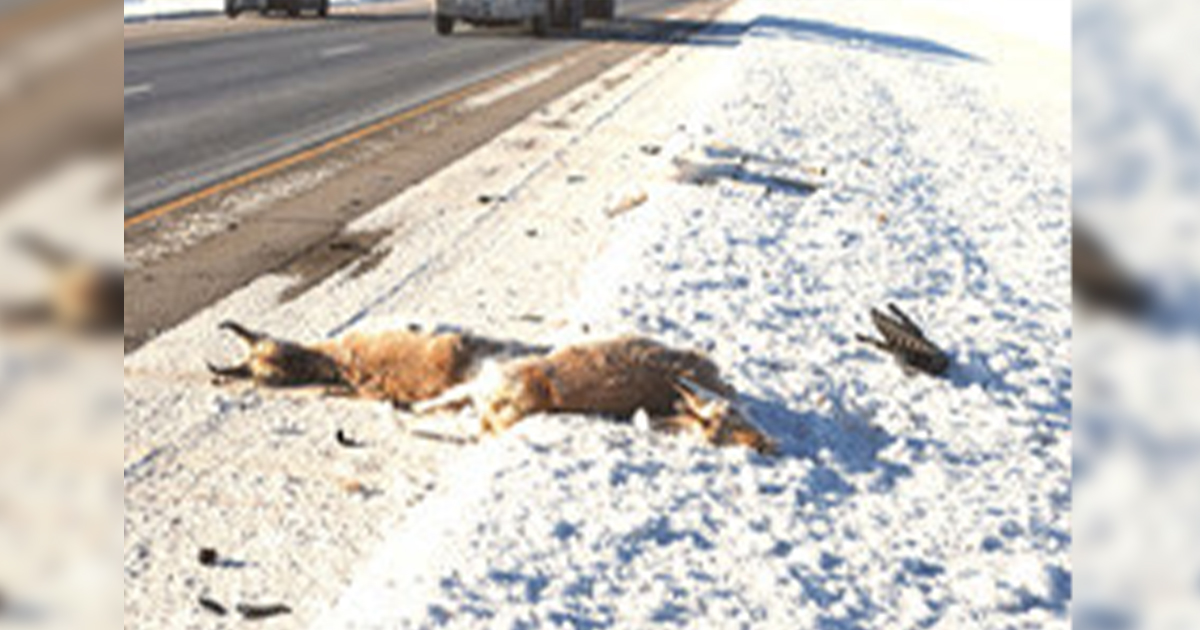 These pronghorn antelope were killed trying to cross the Interstate 80. Wyoming Game and Fish Department photo by Kevin Spence

The motoring public in southwest Wyoming is urged to reduce speed and be especially watchful for migrating pronghorn and other big game, as this winter progresses. Reducing speed and being extra watchful is the best way to avoid a collision and costly repairs.

“Poor visibility, coupled with slick roads this winter, have made it challenging for both motorists and wildlife,” said Green River Wildlife Management Coordinator Mark Zornes. “The 2019-20 winter is shaping up to be a long and cold one and pronghorn are moving to traditional crucial winter ranges, as conditions worsen. Pronghorn, occasionally vary the distance they move in winter depending on weather conditions and snowfall patterns. While they return to winter ranges used for eons, they often vary the segment they choose to use in any given year, moving to avoid the worst conditions. However, the urge to migrate is as strong for this species as it is for mule deer, salmon and caribou, and is not something that can be altered by man.”

Unfortunately, there are a number of impediments to pronghorn migration, including industrial projects, highways, fences, housing, and other obstacles that hinder or stop these annual movements, and increase mortality.

Already this winter, a number of local incidents have occurred involving vehicle collisions and pronghorn. Collisions have occurred on Wyoming Highways 189, 372, and 374, on Interstate Highway 80 at the Granger Interchange, the Highway 372 Interchange, and at Covered Wagon Road, and on US Highway 30, both south and northwest of Granger. Collisions and the number of dead pronghorn appear higher this winter than in the recent past. Game and Fish personnel have managed to avert several other incidents as well through fence modification and by opening ROW gates. G&F personnel have also been involved in activities ranging from slowing traffic and trying to keep pronghorn and motorists separate, to euthanizing injured pronghorn.

“Pronghorn are arguably one of the more difficult wild animals to “herd” and a species more prone to blind panic than others,” Zornes said. “During efforts to remove pronghorn from a right-of-way (ROW), traffic often cannot be stopped or delayed. One ill-timed “drive-by” during a herding effort can result in panic and wild running (pronghorn can run in excess of 50 mph) from fence line to fence line, usually resulting in dead or injured pronghorn and vehicle damage. “

“Once pronghorn enter a highway ROW, the most effective thing to do is to open all gates and let them exit the ROW at their own pace,” Zornes added. “We recommend wide-fenced ROWs, which allow these animals to feel less restricted and is proven to reduce collisions. Regularly and often spaced-paired gates provide some of the best options for crossing and reduces time pronghorn must spend within the ROW. We also recommend fences be equipped with a bottom wire (smooth is best) height of at least 16 inches, allowing pronghorn to crawl under (since they prefer not to jump). During some winters, snow conditions can negate this opportunity if snow is deep and crusted.”

“Cooperative studies are currently underway locally to increase our understanding of pronghorn migration in SW Wyoming. The studies are geared toward refining our understanding of movements of these animals, and to assess potential long-term solutions to mitigate impacts from infrastructure such as fencing and roadways. We hope this continued work will aid the ability of pronghorn to continue their historic migrations, ensuring the survival of this iconic Wyoming species for generations to come.”