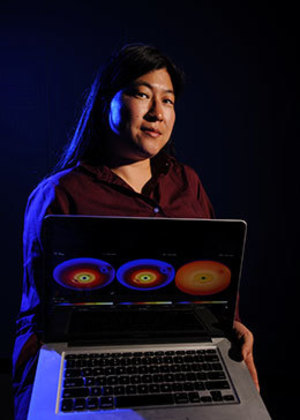 LARAMIE WYOMING — University of Wyoming researcher Hannah Jang-Condell is playing a key role in an unprecedented initiative dedicated to the search for life on planets outside our solar system, NASA announced Tuesday.

The Nexus for Exoplanet System Science, or “NExSS,” seeks to better understand the various components of exoplanets (planets around stars), as well as how the planet stars and neighbor planets interact to support life.

“This interdisciplinary endeavor connects top research teams and provides a synthesized approach in the search for planets with the greatest potential for signs of life,” says Jim Green, NASA’s director of Planetary Science. “The hunt for exoplanets is not only a priority for astronomers, it’s of keen interest to planetary and climate scientists as well.”

Jang-Condell’s UW team will explore the evolution of planet formation, modeling disks around young stars that are in the process of forming their planets.

“Of particular interest are ‘transitional’ disks, which are protostellar disks that appear to have inner holes or regions partially cleared of gas and dust,” says Jang-Condell, an assistant professor in the UW Department of Physics and Astronomy. “These inner holes may be caused, in part, by planets inside or near the holes.”

Jang-Condell’s group is one of five teams chosen from the Planetary Science Division portion of the Exoplanets Research Program. According to NASA, “each brings a unique combination of expertise to understand the fundamental origins of exoplanetary systems, through laboratory, observational and modeling studies.”

The study of exoplanets is a relatively new field. The discovery of the first exoplanet around a star like our sun was made in 1995. Since the launch of NASA’s Kepler space telescope six years ago, more than 1,000 exoplanets have been found, with thousands of additional candidates waiting to be confirmed. Scientists are developing ways to confirm the habitability of these worlds and search for biosignatures, or signs of life.

The key to this effort is to understand how biology interacts with the atmosphere, geology, oceans and interior of a planet, and how these interactions are affected by the host star. This “system science” approach will help scientists better understand how to look for life on exoplanets.

NExSS will bring together prominent research communities in an unprecedented collaboration, to share their perspectives, research results, and approaches in the pursuit of one of humanity’s deepest questions: Are we alone?

The team will help classify the diversity of worlds being discovered, understand the potential habitability of these worlds, and develop tools and technologies needed in the search for life beyond Earth.

Jang-Condell’s computational astrophysics research focuses on the theoretical study of the origins of planet formation in our solar system and those around other stars. Specifically, her research investigates how planets form as a byproduct of the creation of stars.

Her group is the first to combine the dynamics of gas flow with heating from the central star.

“I study the motion of gas in disks, and how it responds to the planet being in the disks. The disk is heated up by stellar illumination, a process in which a star shines on a disk and heats it up.”

Our solar system formed from a disk, which is essentially made of materials left over after the formation of the sun, she says. In essence, there is a star at the center of the system and clouds of gas located around the star.

One theory, called core accretion, purports that small planets, such as Earth, form from dust in the disk. The dust collides to form pebbles, which become larger and larger, and eventually form giant planets.

The second theory is called disk instability. In this theory, massive and cold disks gravitationally fragment, forming a clump. The clump collapses into a planet. While the planet is forming, it is orbiting within the disk.

In either case, the planet eventually becomes massive enough to clear a gap in the disk. If the disk is heated by starlight, a shadow will form in the disk’s gap. The shadow will cool while the far side of the disk will heat up and expand by illumination.

“These gap shadows have been observed in some disks around young stars,” Jang-Condell says. “This research predicts the relation between planet properties and gap features, allowing a direct probe of planet formation as it is occurring.”