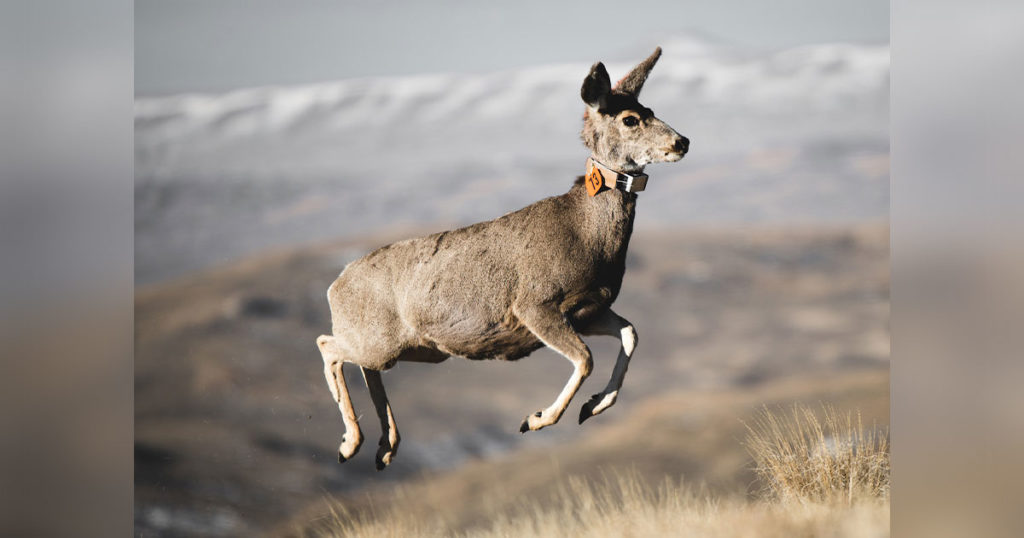 A mule deer is released wearing a GPS collar. The data from this collar will enable researchers and managers to track the migrations of mule deer and evaluate their habitat use and population performance to aid in management of mule deer populations in Wyoming. (Ben Kraushaar Photo)

LARAMIE — For the first time, researchers have published a geonarrative revealing the record-breaking journey of Deer 255, whose story illustrates the challenges and opportunities for conserving migratory mule deer herds across the changing American West.

Users can scroll through the online narrative to peruse maps, videos and recent findings on the migration dynamics of Rocky Mountain mule deer. The project draws on collaborative research by the U.S. Geological Survey’s (USGS) Wyoming Cooperative Fish and Wildlife Research Unit at the University of Wyoming, the Wyoming Game and Fish Department and many other partners.

Among the thousands of deer migrations tracked thus far across Western states, the researchers found that Deer 255 makes the longest point-to-point mule deer migration on record.

Her 480-mile round-trip journey stretches from the greater Yellowstone ecosystem to southern Wyoming’s Red Desert. That’s the longest documented land migration in the lower 48 states and second only to caribou in North America.

The geonarrative follows Deer 255’s fall migration route from end to end, taking the reader through each leg of the trip and the obstacles the adult doe faces during migration.

The story of Deer 255’s journey paints a picture of the modern West — diverse habitats managed by many hands, rapidly changing in the face of a growing human footprint and climate change. By tracking mule deer like 255 and her herd, researchers learn not only where they go and how long it takes, but also how changes on the land can influence migratory behaviors.

Deer 255 and the rest of the herd follow an annual cycle tied to spring green-up of plants so that they are always eating the most nutrient- and protein-dense greens, a phenomenon known as “surfing the green wave.”

“Deer strongly choreograph their movements to match the green-up, which means they are migrating for a couple of months, not just a couple of days,” says Matt Kauffman, director of the Wyoming Cooperative Fish and Wildlife Research Unit and the Wyoming Migration Initiative at UW. “These deer rely not only on habitat in their summer and winter ranges, but also along their migration routes.”

Kauffman and his team fitted Deer 255 with a GPS collar in the Red Desert in spring 2016.

Her GPS collar malfunctioned on her Island Park, Idaho, summer range before she migrated back to the Red Desert, leaving researchers to wonder whether the long trip was a fluke. But, in 2018, Deer 255 was found and captured again and fitted with a new GPS collar. In the years since, she has repeated the 242-mile journey and shorter variations.

Traveling hundreds of miles from the mountains to the desert, Deer 255 and her herd pass through a patchwork of land composed of national parks, working ranchlands and developed areas. The barriers the deer cross are both physical and jurisdictional, ancient and brand-new, from the craggy mountain ranges of the Tetons and long, narrow glacial lakes to the fences and highways that cut Wyoming’s lands into private and public parcels.

Protecting a population that migrates long distances is a challenge that won’t fit within the bounds of a single protected area such as a national park. Mapping these migrations can inform management decisions, including planning for housing and energy development or helping attract funding for public-private partnerships.

For example, the researchers tracking Deer 255’s herd identified a critical bottleneck in the migration corridor that crossed a parcel of land slated for a new housing development. This sparked a $2.1 million conservation effort to protect the bottleneck and ensure safe passage of migrating deer.

Mule deer that migrate shorter distances can provide plenty of useful information, too. Following 14 years of tracking a population in south-central Wyoming, the researchers were able to see that these deer slowed down when they encountered natural gas projects, throwing off their ability to “surf the green wave.”

Deer 255’s story map illustrates all of these topics, showing how data provides tools to maintain functionality of migration corridors for future generations. The geonarrative was developed to be embedded in the American Conservation and Stewardship Atlas that the USGS is creating for President Biden’s America the Beautiful initiative.

“We’re excited that this work will be featured in the Conservation Atlas,” Kauffman says. “The immersive map products we are creating make scientific research accessible, helping provide context to the local communities that interact with these migrations, such as ranching operations.”