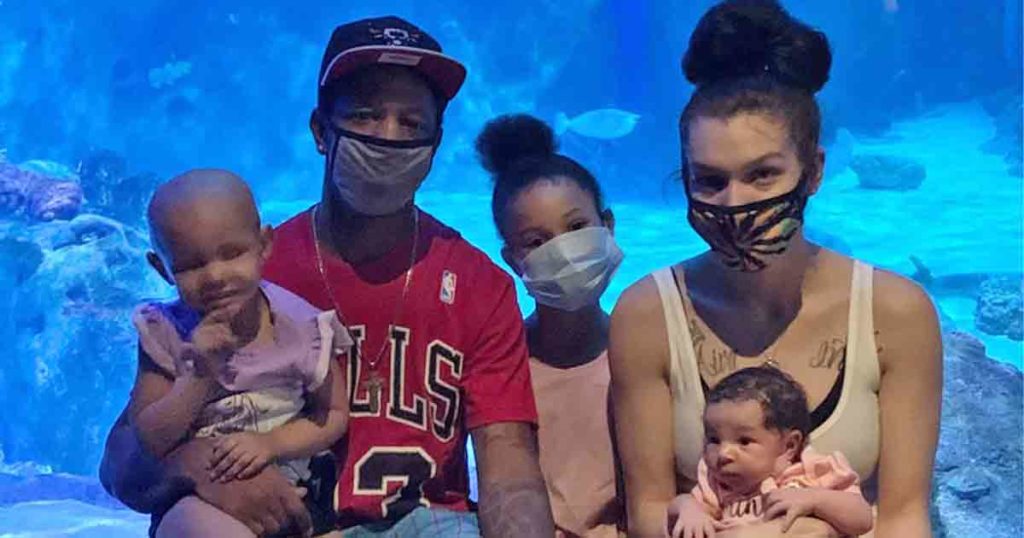 Ivie, Antwon, Aiva, Mercedes, and Nova try to remain strong as Ivie continues her fight against cancer and Antwon waits for a kidney transplant. Courtesy photo

ROCK SPRINGS — For 3-year-old Ivie Tate and her family, visiting the doctor’s office for treatment is just something they have done frequently for a long time.

It’s been about a year since SweetwaterNOW last checked in with Ivie Tate and her family to see how things were going. Last year, Ivie was still being treated for a cancerous spot on her lung that was about 6.6 centimeters. At that time, the family still didn’t know if Ivie would need surgery or not.

Shortly after Ivie’s first birthday, she was diagnosed with cancer. Since then, the family is constantly in and out of doctors’ appointments. Earlier this year, Ivie had surgery to remove what was left of the tumor on her right lung, her mother Mercedes Guilford said.

During the surgery, the doctors noticed smaller tumors were visible around the bigger tumor they were removing. After noticing the smaller tumors, Ivie once again started chemotherapy treatments to get rid of them.

May 2, 2021, was a great day for Ivie since it was the last day of chemotherapy treatment. Everyone in the family was excited.

“We were planning a big celebration for her last scan,” Mercedes said.

The celebration quickly turned into disappointment, when the scans came back revealing another tumor on Ivie’s lung. This tumor is located in the same spot one of the smaller tumors was previously located.

Once again, Ivie was back in the hospital, but this time for 12 rounds of radiation prior to surgery this week. Ivie started the radiation treatments on July 7 and finished them on July 22. The radiation treatments are to shrink the tumor, so the doctors do not have to remove as much lung during the surgery. The next surgery Ivie will have will be a big one. The doctors will not only be removing some of her lung, but a portion of at least three ribs due to the location of the cancer.

So far, Ivie has had three major surgeries and 10 smaller procedures since she was diagnosed.

After Ivie’s surgery, they could remain at Primary Children’s in Salt Lake City for at up to a month. As Ivie continues to grow up, she’s more aware of what’s going on.

Despite repeated treatments, Ivie is overall a pretty happy child, however she is starting to dislike going to the doctor’s office, Mercedes said.

With all of the treatments for Ivie, the family didn’t pay too much attention to Ivie’s father, Antwon’s, stomach problems.

“He started having problems a few months ago,” Mercedes said.

Antwon was throwing up, having stomach pains and just didn’t feel good overall. It only became worse toward the end of July, Antwon was lethargic and couldn’t even keep water down. After returning home from Ivie’s chemo treatments, Mercedes said she forced her husband to go to the hospital.

“I pretty much had to drag him there at the end of last month,” Mercedes said.

It’s a good thing she did because they found out Antwon has been in kidney failure for at least one year. Mercedes said they also discovered he had high blood pressure that went undiagnosed, which eventually led to the kidney failure. The doctors said it was so bad they were surprised Antwon hadn’t suffered a stroke or heart attack because of it.

With both kidneys only functioning at less than 10 percent, Antwon is on dialysis. Antwon visits Memorial Hospital of Sweetwater County daily for dialysis treatments. He will continue to do this until he can complete the dialysis treatments at home on his own. Each treatment takes 8 to 10 hours.

Mercedes said Antwon is on a very strict diet and blood pressure medication. He is currently on the waiting list for a kidney transplant.

Despite everything that’s going on, the family is trying to stay strong for each other. Mercedes said their oldest child, Aiva Tate, 7, has been so supportive and understanding of what’s happening to her younger sister.

“She’s an amazing big sister though,” Mercedes said. “She does everything Ivie wants to do.”

Aiva, is not only great with Ivie, but with her four-month-old sister, Nova.

With a newborn in the house and two family members needing medical attention, Mercedes is busy.

“It’s just something I have to do I guess,” Mercedes said. “I have to make sure they are taken care of.”

However, she knows she must keep going to stay strong for her family. Antwon said his family is what is keeping him strong. Even though both Ivie and Antwon are on Medicaid, the bills are starting to pile up. Antwon was just approved for Medicaid so any bills prior to his approval will not be covered, she explained.

The family is asking for emotional support and if anyone would like to make a financial contribution, they will accept that too. For more information or to give words on encouragement, visit the family’s Facebook Page.