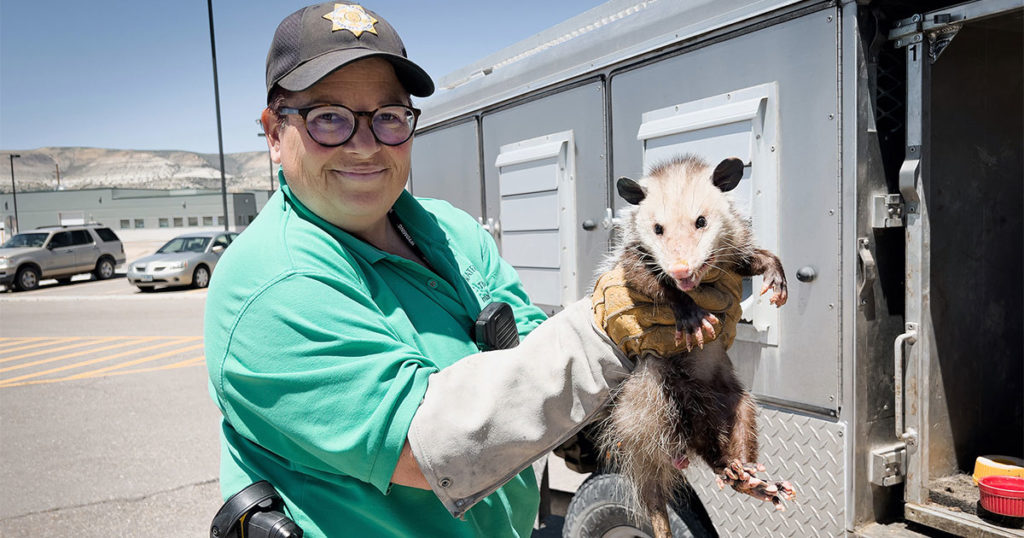 SWEETWATER COUNTY — A non-native opossum was found and recently rescued west of Rock Springs after a resident discovered it hiding under his home.

On Monday, June 6, at around 12:30 p.m., Sweetwater County Sheriff’s Office animal control officer, Chris Thomas, responded to the Western Hills neighborhood on Purple Sage Road west of Rock Springs for a report of a local resident who discovered an opossum hiding under his residence.

The Virginia opossum, commonly known as the North American opossum, is the only marsupial, or pouched mammal, found north of Mexico, and today across North America, is native primarily to the southern United States in places like Alabama, Georgia, and Mississippi. They are not native to Wyoming, and likely would not survive our harsh winters in the wild.

Thomas said this particular opossum is a male and roughly the size of a small house cat. Dubbed “George” by Thomas, she does not believe that he is domesticated, or has been living as someone’s pet. Rather, opossum often seek refuge in dark, tight spaces, and she believes it most likely that George hitched a ride on a semi on the interstate and probably went looking for food when the rig’s driver stopped to rest or for fuel.

Thomas has personally cared for George during his week-long stay here in Sweetwater County. While she said it took some work to find, she finally located a nearby licensed rehabilitation center who cares for small mammals that is going to take George, have him examined by a veterinarian to ensure that he is in good health and free of any diseases, and arrange for his transportation and re-homing back to an area of the U.S. in which opossum live in the wild as a native species.

Under Wyoming law, the possession of an exotic animal, which includes any animal that is not found in a wild, free or unconfined status in Wyoming, is strictly regulated, often limited to specific purposes, and generally requires a special state permit, with the possession of some species specifically and outright illegal.  For more detailed information, Thomas encouraged people to visit the Wyoming Game and Fish’s website.

“It’s really important for people to educate themselves on the law as it pertains to the possession of wild animals in Wyoming. City and county ordinances in Wyoming can also further restrict the possession of certain species,” Thomas said. “The private ownership of opossum in Green River and Rock Springs is illegal, and the introduction of animals that are not native to Wyoming threatens our local ecosystem by disrupting the natural food-chain and introducing new, potentially dangerous diseases for which we as humans, our pets, and our wildlife have no natural immunity.”

Known widely for hissing aloud or showing their mouth full of incisor teeth when threatened, and playing dead when frightened, opossums are docile, non-territorial, nocturnal, solitary animals who are ground-dwelling, but also spend a significant amount of time in trees. While they do use their prehensile tails to help them climb, contrary to popular folklore and cartoons, they rarely hang by their tails nor do they sleep in this position.

As a marsupial, much like kangaroos, the opossum is a unique creature that also gives birth to relatively undeveloped young that complete development inside of the mother’s marsupium, or pouch, located on the underside of her body between her hind legs. When it comes to diet, the opossum is an opportunist who will eat almost anything, but their diet primarily includes fruits, nuts, plants and vegetables, eggs, and other small animals including crustaceans, reptiles, amphibians, small birds. In urban and suburban settings, they scavenge garbage, bird seeds, and not surprisingly, they also enjoy pet food.