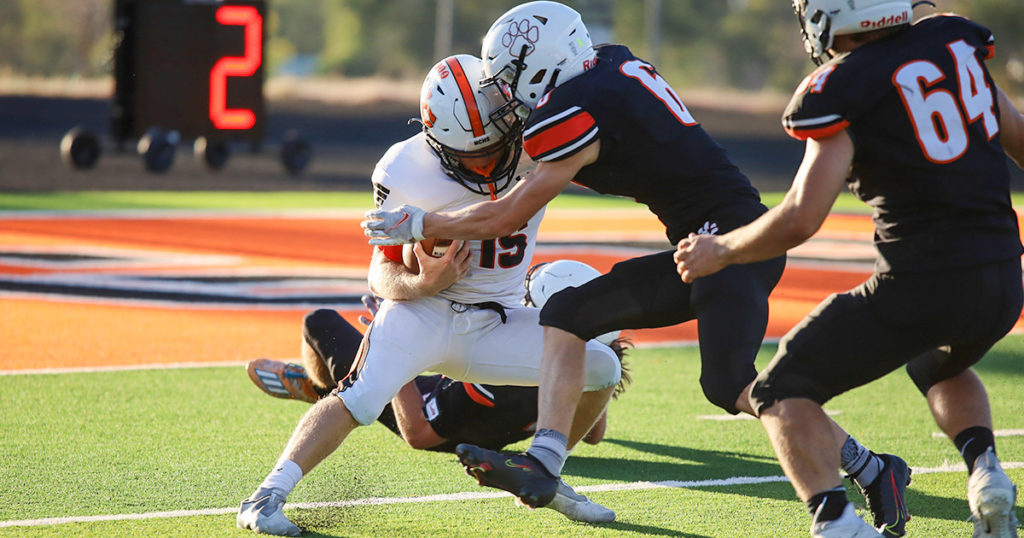 ROCK SPRINGS — It wasn’t pretty, but the #2 Rock Springs Tigers (RSHS) added another win to their record tonight against the Natrona County Mustangs 17-14.

The Tigers showed that they could bounce back against an underrated Natrona County team after a tough loss last week against Sheridan.

Rock Springs struggled offensively in the redzone, which is complete opposite of what we’ve seen the last four weeks. Twice the Tigers had to settle for field goals that should have been trips for six. Some mental errors and incorrect reads along with great defense by Natrona kept the offense at bay tonight.

There might have been more penalties than points on the board tonight — it had to have been close. For both teams, they found themselves in third and long situations, sometimes twenty yards away from the first down marker. You never really knew what you were going to see from each team when they went out on offense.

As for the flow of the game, it was choppy. There were multiple long delays from the officiating crew. It felt like neither team had momentum at any point.

I hate to call officials out because I know it’s not an easy job, but there were a few strange calls. One in particular was a mixup with what down it was for Rock Springs. They ended up ruling it a fourth down when it really was third down. I’ve never seen a mistake like that before, but it just added to the strangeness of Friday night’s game.

At the end of the day, the Tigers did what they had to do to win this game and that’s all that really matters. A win is a win.

In nearly every game this season Skorcz has had big plays down the field. Tonight he had two. And both went for touchdowns.

The first was a 53-yard bomb from quarterback Brock Bider to Skorcz, who ran untouched for six. On the following drive, Tommy Faigl found Skorcz for another 52-yard touchdown pass on a trick play.

The kid has glue for hands and somehow is always beating his defender. I think a lot of teams forget about him because of the other offensive weapons Rock Springs has.

Here’s another deep ball for you Skorcz.

4A is Still Wide Open

If there was one takeaway from the 4A action this week, it’s that this year’s title is still up for grabs. Anyone can win it.

The #1 Sheridan Broncs lost to #4 Cheyenne East 24-21. Coach Lenhardt said he wasn’t surprised that East beat Sheridan and I would say the same. Coming off a huge, dramatic win is usually a tough outing for any team to win the following week. And don’t mention that we all wrote off East after they lost the season opener against Thunder Basin. They proved why they are still one of the top teams in 4A.

Tonight’s game between the Mustangs and Tigers was also evidence of 4A still being wide open. I think it’s safe to say a lot of people wrote off Natrona County. They are a tough team with a great coach. It’s not a program anyone should overlook.

But that’s what’s exciting about the level playing field this year. It’s up for grabs, and the Tigers have just as much talent and capability to bring home that state title this year.