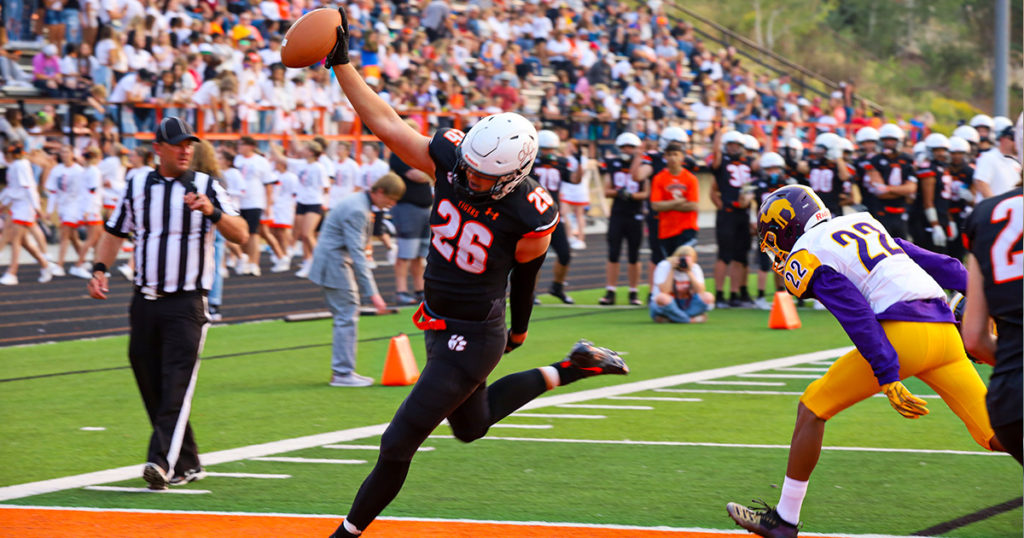 ROCK SPRINGS — The start of a new football season is exciting, but even more exciting when you come away with a blowout victory.

Friday night’s 56-8 win over the Campbell County Camels is exactly what the Rock Springs Tigers have been prepping months for and it’s evidence of a program on track to have success this season.

Rock Springs begins the season 1-0, with first-ranked Thunder Basin right around the corner next week.

If there was any doubt about experience mattering for this football team, it was a large part of tonight’s win.

Over the last few seasons, the Tigers have struggled to close out games. This group of veteran players have been through it, lived it and learned from it.

The Tigers opened up the game with a kick return to their own 40-yard line and proceeded to drive down to the goal line. There were no mistakes and it resulted in an impressive drive that was capped off with a four-yard touchdown run from Isaac Schoenfeld.

Campbell County then scored on their first offensive play, taking it in for an 80-yard touchdown. There was no folding and the Tigers answered right back with another touchdown. The defense didn’t allow another point and made it very difficult for the Camels offense to produce much of anything but turnovers.

This team is mature and in the moments where they could’ve gave up or become complacent they didn’t. Experience in those types of situations before showed that this team has paid attention and learned. It was evident tonight and it will continue to be a major factor behind the success of this team this season.

My game ball goes out to the offensive line and defensive line who practically man-handled Campbell County up front throughout the game, more specifically in the first half.

For what size Rock Springs lacks up front, they sure make up for with good technique and execution. The Tigers ran the ball at will, which accounted for four rushing touchdowns. There’s only one way that happens and that’s because of the fellas up front.

On the defensive side the same could be said for the pass rush. Campbell County had several turnovers which were in some way influenced by the defensive line getting to the quarterback or stuffing the running lanes.

“It was one of those situations where we wanted to get off to a fast start. The fact we were able to go score right away kind of calmed us down. When you have a veteran team that’s what you should do. I thought that we did a good job of mixing the run and pass offensively and defensively we got some pressure that led to some mistakes. I expect Campbell County as the year goes on to continue to get better and we’ll see how things shake out.

We had a couple coverage busts. There were some times on special teams on kickoff coverage that we got out of our lanes a little bit. We didn’t get hurt by it but we very well could. I think those are things that we have to do better. I’m sure we’ll watch the film and there will be things we can fix across the board. It was a good start. It was a little concerning our guys didn’t get to play a whole game. You worry about your conditioning in the fourth quarter. We’ve been practicing hard and I thought that was our competitive edge tonight.”

If there was at least one thing that was more impressive than a 56-8 win, it was the turnout and school spirit that filled the stadium. It’s been a while since Tiger Stadium has seen as big of a crowd as it did Friday night.

Shoutout to the Rock Springs Huddle Up Booster Club for making a difference. From little differences like painted railings to utilizing the scoreboard, there was definitely a different feel to Tiger Stadium. It was fun to see the support of the community and the different businesses that have stepped up to bring the Tiger pride back.

I think it’s safe to assume that it’s here to stay.

Catch you after next week’s game.