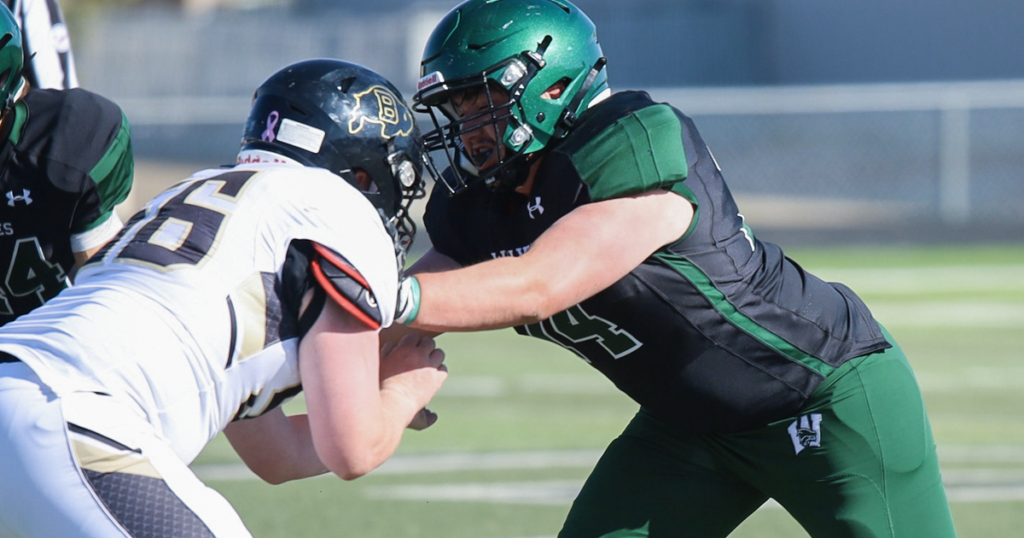 EVANSTON — Green River’s exciting and dramatic win over the Evanston Red Devils in the first conference game of the season was the perfect example of team effort.

A lackluster first half by both teams saw a completely different second half that was full of lead changes down to the final seconds, giving the Wolves a 23-20 victory on Friday afternoon.

Like a fine diamond, the Wolves’ defense shined during high-pressure situations. Driving down the field to win the game in the final minute, Evanston turned the ball over on the 12-yard line after a play was blown up by Green River’s defense. A huge fourth down stop in the first half and one other turnover by Evanston’s offense in scoring position made the difference in the ball game.

The defensive line played a huge role in the success of the defense. Evanston’s wishbone offense filled with option plays required a sound and disciplined defense to stop it and the Wolves did just that. The boys up front held their own and made the right reads when they needed to the most.

Green River’s defense was key in their first victory over Buffalo earlier this season and it continues to be an anchor for the success of this year’s team.

It’s no secret the Wolves have struggled offensively this year to get much of a passing game going. That changed today and we witnessed the threat these Green River athletes pose when the passing game is executed.

Two of the Wolves’ touchdowns came through the air, including a 60-yard scamper from quarterback Jachob Fuss to wideout Dylan Taylor to begin the second half. That explosive play ignited the offense, which went on to rack up 20 points in the second half.

Throwing the ball is crucial to the Wolves’ balanced approach offensively and it will be exciting to see where this team can go when they are successful through the air.

Although James King had his way on the ground, my game ball this week goes to the entire offensive line. Some of the holes that King had opened up by the front five was exceptional. King had some long runs against Evanston, which was complimented by the offensive line.

The offensive line also played a roll in setting up the passing game, which we saw find its rhythm today.

Kudos to the big fellas up front.