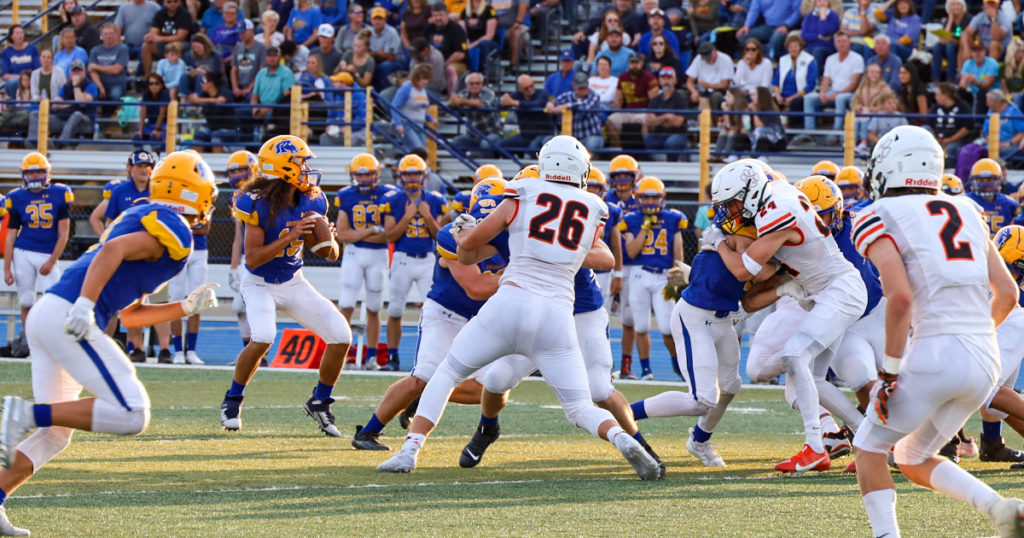 ROCK SPRINGS — The #1 Rock Springs Tigers played their hearts out Friday night against #2 Sheridan Broncs in what might have been a preview of the 2021 4A state title game.

While the final score of 27-24 in favor of Sheridan gives little context to the game that unfolded, it was a brilliant game between the two top teams in 4A.

A Successful Battle Against Adversity

Although Rock Springs didn’t win the game, they did win a battle with adversity and that’s a characteristic of a great team.

You could see this on an individual level to a team level tonight. Isaac Schoenfeld, who was relatively quiet throughout the first half offensively, took a hard hit that sidelined him. But he battled back, got out onto the field and made some big plays late in the game.

The offensive unit also overcame a great deal of adversity in this game. In the first half, Rock Springs struggled to get anything going. A lone touchdown from Cadon Shaklee came in the first quarter and the Sheridan defense shut the Tigers down throughout the remainder of the first half.

However the team flipped the script in the second half, and battled back down 20-7 in the third quarter. The passing game finally got into a rhythm and rattled off 17 unanswered points to take the lead 24-20 late in the fourth quarter.

Sheridan’s last attempt to win the ball game came with less than two minutes in the game. On fourth and one, the Broncs’ Colson Coon caught a screen pass and took it 70 yards down the field to steal the game 27-24. It was a great call and a great play.

The Tigers didn’t win the game, but they won a battle against adversity. Instead of folding like a cheap lawn chair, this team set itself up for success multiple times tonight and that’s something worth taking away from tonight’s loss.

In the long run these experiences of adversity will serve this team well and that might just do more good for this team than they realize.

Tonight’s game ball goes out to three defensive players who created opportunities for the Tiger’s offense.

The first on the list is Jake Eddy, who had a huge tackle for loss on third down during the opening drive of the game to force a Sheridan punt. He set the tone for the defense on that play and took away the Broncs first opportunity offensively. This kid’s a baller and he’s constantly in the backfield.

My next defensive player on the list is Tommy Faigl who literally took the game ball himself. Faigl had another interception tonight, which I believe is his third on the season. He not only prevented a long touchdown, but took it away. His hands continue to be sticky.

Lastly, Henry Carrier gets on this list this week. After the Tigers offense came up short, Carrier picked off Rich Hall. I think this play sparked the team late in the game. Great play by Carrier.

There was one other turnover the Tigers forced, but it wasn’t clear on the broadcast who had the interception. But I’d still like to recognize that turnover.

Congrats to all of these players. The defense sometimes goes unnoticed, but tonight you created opportunities for the offense to win this game.

Friday night’s game against Sheridan wasn’t the cleanest we’ve seen from this team so far this year. In fact, it was probably the worst. But to some degree you see more mistakes when you play against better competition.

Either way, the mistakes the Tigers had tonight certainly didn’t help. Going into the game, Lenhardt said that the team focused on special teams which was going to be huge in this matchup. And it was. The first Sheridan touchdown of the game came in the first quarter on a 40-yard punt return.

Penalties also hurt this team tonight. There were several holding calls along with a few illegal man down field calls that killed a few drives.

The good news is that those things are fixable and I suspect we’ll see a cleaner game from this team next time these two squads meet up.